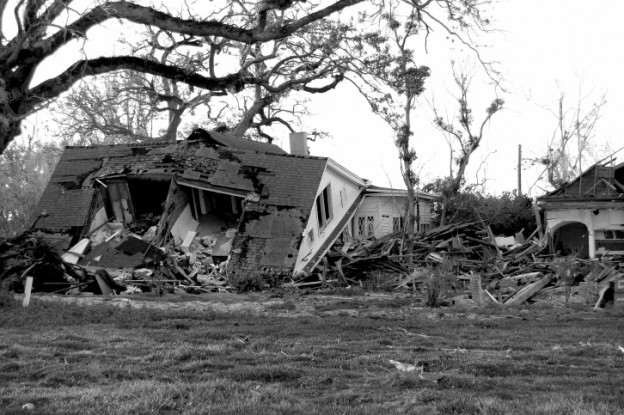 Then I saw a new heaven and a new earth, for the old heaven and the old earth had disappeared.  And the sea was also gone. (Revelation 21:1, New Living Translation).

As I looked out at the bedraggled remnant of our congregation and read those words aloud my voice began to crack and my eyes began to fill with tears.  It was the Sunday after Hurricane Katrina had devastated our beautiful Gulf Coast.  Just days earlier, August 29, 2005, much of our City of Long Beach, Mississippi had been washed away by the sea underneath a twenty-eight foot storm surge.  The hurricane had put cars in trees, boats on streets, and buildings on the ground.  Our entire world had been turned upside down.

My life before ministry had prepared me for managing disaster.  I had professional training and experience in emergency management, but now I was personally impacted and had a different role as a pastor.  I had become a wounded healer.  Leading a disaster recovery effort would certainly be important, but I was in a position to offer something else: a word from God.  In fact, I would be expected to offer THE Word of God.  Preaching over the next several months would become a vital tool in helping individuals, restoring a congregation, and rebuilding a city.

In the days leading up to that first Sunday morning I wondered what I could possibly say to these people that would meet their needs; that would meet my needs.  Death, destruction, and despair surrounded us. As I prayed about what to say, the Holy Spirit clearly took me to John’s vision of the new heaven and earth.  The old order had indeed passed away but we have been given a revelation of a new day to come.  There would be a re-creation.  That was the message with which we would begin.  A promise of hope.

Over the next weeks other sermons formed around the themes of Help (Psalm 121), and Heart (2 Corinthians 4), and Healing (Isaiah 58), and Home (John 14).  That was a good start but it quickly became apparent this would be a long term process.  I had to figure out how to not merely preach about the disaster, but to preach through the disaster.  Here are a few things I learned.

Keep it simple.  The Gospel is Good News and that was something we all needed to hear.

People who were in a desperate situation wanted to know that their God cared.  He was right alongside of us in our suffering and that needed to be proclaimed.

Concise, Biblical sermons were critical.  I was blessed to be able to call upon my training in inductive Bible study which allowed me to do faithful exegesis without books, resources, and, above all, without much time.  As pastors we are challenged to preach the word of God. Be prepared, whether the time is favorable or not (2 Timothy 4:2, NLT). That was certainly the task at hand.

Provide comfort. Providing comfort seemed an obvious preaching task but that became harder as weeks turned into months.  It was important to avoid pat answers such as “God will see us through.”  We believed that with all our hearts, but it was helpful in the sermons to note those glory sightings that gave evidence to God’s presence.  Gradually the scale tipped from sorrows to joys.  Preaching became a sort of group therapy; balancing individual issues, practical needs, and eternal promises.

It was also important while preaching to stay clear of trite statements like, “It is only possessions.”  Maybe, but for the elderly lady I watched dig through the rubble of her home trying to find her wedding dress, that possession represented a lifetime of love.  We are reminded in Scripture to rejoice with those who rejoice, weep with those who weep (Romans 12:15, NLT).  Everyone had stories that needed to be shared and we worked as many of those as possible into our preaching and worship.

Leverage the moment to begin new mission work.  Ours was a mission minded church before the storm but our recovery efforts propelled us into the community in ways that we could never have imagined.  The overwhelming response from new friends all over the country opened our eyes to the possibilities of new shared ministries.  We were able to work more closely with other churches in the recovery process and reach out across all sorts of boundaries.  How can you show me your faith if you don’t have good deeds? I will show you my faith by my good deeds (James 2:18, NLT).   It became important for the preacher to keep these opportunities before the congregation in a manner that inspired us in that effort.

Through the sermons we were able to promote new ventures like a youth-led mission camp, which not only transformed the lives of several hundred teenagers but also impacted our church and community in amazing ways.  Within a year our congregation, still recovering, was inspired to launch a mission trip to help a hurricane-ravaged community in Texas.  As we helped we healed.  The preaching task was to reinforce that lesson to our congregation on a week to week basis.

Preach prophetically. Most people wanted to simply put things back the way they were before the storm.  That would be impossible.  Our community, our church, our individual lives would be forever different   Things could be better but they would never be the same.  Change was coming whether we wanted it or not.  It was important through preaching to cast a vision for a new future and to do so in a way that helped us see where God could lead us.

Early on I preached a sermon entitled “Blessed to be a Blessing” based on Luke 12:48 – When someone has been given much, much will be required in return; and when someone has been entrusted with much, even more will be required (NLT).  It was a challenge to address the future head on and see where God was taking us.  I somehow landed on the idea of repeating that sermon again, so over the next year I delivered the exact same sermon several times leading up to the first anniversary of the storm.  The message of change needed to be worked in to the fabric of our being as a church.  I think it worked well and most interestingly, no one commented about the preacher using the same text over and over again!

Ten years ago I stood before my friends who were facing a very uncertain future.  As I concluded my Scripture reading my voice became strong and the tears were replaced by a smile.  I was able to rejoice in the Word from God: He who was seated on the throne said, “I am making everything new!” Then he said, “Write this down, for these words are trustworthy and true (Revelation 12:5, NLT).”   Indeed they are.  Thanks be to God.