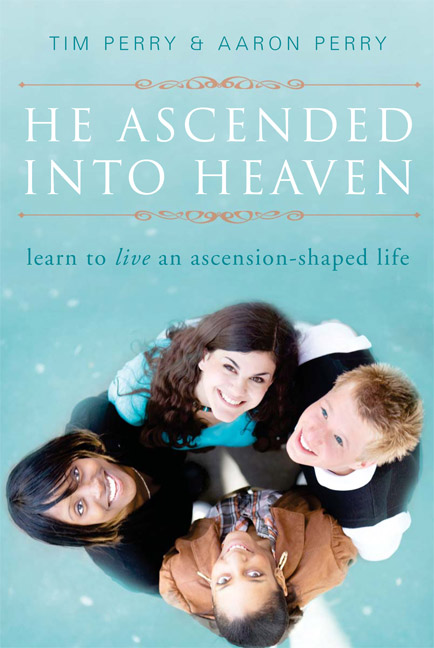 The Ascension of Jesus Christ may be the most under celebrated event in the present day church while also being one of the most significant. Brothers, Tim and Aaron Perry, authored a helpful text, He Ascended into Heaven: Learning to live an Ascension shaped life. Aaron let us know that Paraclete Press is making the electronic version of the book available for $1.99 through the end of January.

Seedbed caught up with Aaron recently to discuss the book. The short interview follows.

SB:   Why does the Ascension matter? Theologically? Practically?

AP:   People, made in God’s image, were to reflect God in their reign over the earth.  The Ascension is the event that restores the only faithful human, Jesus of Nazareth, to that position of leadership.  The Ascension also flows into the giving of the Holy Spirit at Pentecost; the same Spirit who draws people into the reign of Jesus and enables them to reflect his reign in our world.  To put it simply, if Jesus doesn’t reign, why would I serve him?  And if Jesus reigns, then why would I serve anyone/anything else?

SB:   If it matters so much, why is it so widely neglected?

AP:   The Ascension is often treated like an odd family member who shows up at Christmas: they are part of the family but we only acknowledge a relation at certain times.  Likewise, the Ascension strikes us as odd, almost unbelievable.  We prefer to ignore it, but we thereby miss its presence in the New Testament.  Once the Ascension is observed, studied, and taken seriously, then one cannot miss its centrality in Scripture—and its oddness dissipates.

SB:   What inspired you to write this book? What were you hoping to accomplish?

AP:   My brother and co-author, Tim, did a sermon series on the Ascension and the project snow-balled from there as he began to see the Ascension’s centrality.  We desired to take the doctrine of the Ascension and begin to make it formational in our local churches and spur people back to reading Scripture with the Ascension in mind.  I saw how the Ascension helped found people’s commitment to Christ in times when faith waned.

SB:   Who should read this book?

AP:   Regardless of age, education, or church position, all those with a desire to form their mission and discipleship in light of Christ should read this book—with the intention of going back to Scripture.  The writing style tries to be accessible and engaging while the content is unashamedly theological and punctuated with application.  While Tim especially tried to incorporate other ethnic experiences to shape our read of the Ascension, we would love to hear from various experiences who serve the Ascended Lord in situations different from ours to sharpen our own formation and service.

SB:   What’s been the response to the book so far?

AP:   I had one reader who really disliked the book and let me know it.  But others told us this was the first time they had thought about the Ascension and have come to appreciate cross, resurrection, ministry, healing, fasting, confession, and personal sacrifice in new ways.  A few pastors have used the book for sermon series and several small groups have used the book for group study.

This would make an excellent church wide study or group resource during the 40 days after Easter leading up to the Ascension of Jesus Christ. Remember, the electronic version of the book available for $1.99 through the end of January. It would be worth stocking up on them now even if you couldn’t use them until later.

Aaron Perry is the Pastor of Christian Education at Centennial Road Church in Ontario. You can connect with him on Facebook.

Tim Perry is the Rector of the Church of the Epiphany in Ontario. He is a regular blogger and writes for ChristianWeek, Anglican Planet, and Faith Today. He occaisonally teaches at Providence Theological Seminary and Thorneloe University College of Theology.