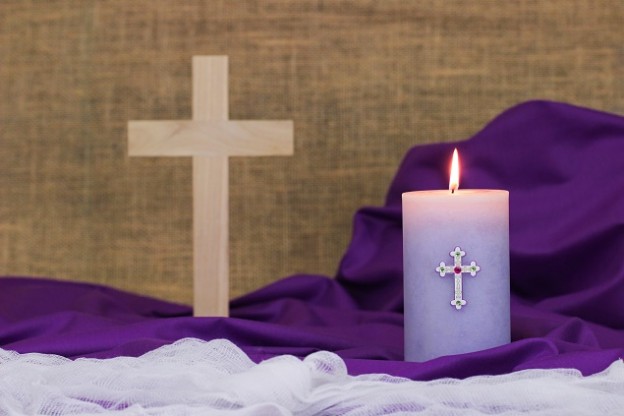 Some Lenten observances border on works-righteousness. We recognize our sinfulness and need for redemption, but we have a tendency to emphasize our own efforts at self-improvement and can unwittingly de-emphasize grace. While I’m a good Wesleyan and believe wholeheartedly in working out my salvation with fear and trembling, I also understand all my work and effort as a response to grace, not a way to earn grace. Redemption is God’s doing, so leading up to our remembrance of the cross and the glorious resurrection of Jesus, we want to refocus on the story of redemption found throughout the narrative of Scripture. God’s story is a story of redemption, unfolding in lives, families, and nations through the millennia.

This series of sermons was inspired by Sandra Richter’s Epic of Eden. I recently led two Bible studies using the videos and study guides published by Seedbed and found them enormously helpful in enabling people to understand the overarching narrative of the Bible and the theme that ties it together, which, according to Richter, is redemption.

Origins of the concept of redemption can be traced to the ancient culture in which God’s self-revelation initially unfolded. This was a patriarchal culture centered on the extended family. In this tribal society, persons finding themselves on the margins through poverty or enslaved by enemies could be restored to the family and the resulting security of their place within the family by the patriarch. He would mobilize his resources to rescue the lost family member and restore them to their rightful family status. Richter uses four paradigmatic episodes from the Old Testament to illustrate the concept of redemption: Abraham and Lot; the Exodus; Hosea and Gomer; and Ruth, Naomi, and Boaz.

Richter demonstrates how this narrative of redemption is brought to its climax in the New Testament through the life, death, and resurrection of Jesus. “Yahweh is presenting himself as the patriarch of the clan who has announced his intent to redeem his lost family members. Not only has he agreed to pay whatever ransom is required, but he has sent the most cherished member of his household to accomplish his intent–his firstborn son” (Richter 45). Not only are the lost sons of Adam and daughters of Eve rescued, but we are made co-heirs with God’s Son. What a story! And, it’s unfolding still, as we join God in his mission of rescue and redemption until the fullness of the Creation is renewed.

In 2016, the First Sunday in Lent is Valentine’s Day. I chose to use the strange romance of Hosea and Gomer to illustrate the undying love of God for his wayward people. Love like that is strange, indeed, in a world in which relationships are based on a “what-have-you-done-for-me-lately” mindset.

This story is more popularly known as the Prodigal Son. “Prodigal” means extravagantly wasteful. While the younger son is wasteful of his inheritance, it is the father in the story whose extravagance is on display as he celebrates his son’s return with a party. In Jesus’ day, the son could well have been killed for bringing shame onto the family, but the heart of God is revealed in the seemingly wasteful (hint: graceful) actions of the father. We’re invited to participate in the redemption celebration along with the elder son.

Third Sunday in Lent: “The Rescue”

Abram and Lot had gone their separate ways due to their families and possessions having grown too large for them to occupy the same area. Lot, having settled in the same plain as Sodom and Gomorrah, gets caught up in a geo-political dispute that leads to war. Lot finds himself on the losing side with he and all his household captive to the pagan king, Chedorlaomer of Elam. Upon hearing the news, Abram gathers a coalition and along with 318 of his own fighting men and pursues and defeats Chedorlaomer, rescuing Lot. As patriarch, he placed himself and his men at great risk in order to redeem Lot.

Fourth Sunday in Lent: “Out of Egypt”

One of the defining stories of the Scriptures is the deliverance of the people of God from Egypt. The Exodus narrative reverberates throughout the rest of the story of redemption. God constantly reminds his people who he is thus who they are: “I am the LORD your God, who brought you out of the land of Egypt, out of the house of slavery” (Exodus 20:2 ESV). For four hundred years, the conditions of the children of Jacob had deteriorated. Out of the depths of helplessness and slavery they called out and God answered their prayers with a leader, Moses. God rescues these slaves from their bondage and calls them his own children, they are redeemed. The redemption narrative of the Exodus prefigures God’s redeeming work through his Son, Jesus, our Passover Lamb.

“Unfamily” is Richter’s term. She uses it to describe the dire straits in which Ruth and Naomi have found themselves. Women without fathers, husbands, or sons in the Ancient Near East were without family and the safety and security that came with it. Ruth, still being marrying age could easily have remained in her homeland and found another husband. Instead, she chooses to go with Naomi to her ancestral home. When they meet Boaz, who is in a position to be “redeemer,” he takes Ruth as wife. Both Ruth and Naomi are restored to family status. Ruth and Boaz’s son is Obed; Obed’s son is Jesse; Jesse’s son is David. It is into this lineage that the Messiah, the Redeemer of Israel and the world, is born.

Palm/Passion Sunday: “The Thief and the Garden”

This sermon focuses on the Passion, particularly, the thief on the cross. Jesus is crucified alongside two thieves (“criminals”). The story of the thieves is the story of how persons may respond to the sacrifice of Jesus. One mocks Jesus, the other seeks his grace. When Jesus responds to the inquiry of the repentant thief, he says “Today you will be with me in Paradise” (Lk. 23:43). The Greek word translated as “paradise” is the word used in the Greek Old Testament for the Garden of Eden. Jesus moves the thief from the curse of the tree of Golgotha to a garden of trees in Paradise. Redemption removes us from the just penalty of our rebellion and restores us to God’s original intent. A redeemed creation becomes the residence of those redeemed by the perfect Lamb of God who takes away the sins of the world. “Everything that lies between Eden’s gate and the New Jerusalem, the bulk of our Bibles, is in essence a huge rescue plan” (Richter 129). On that terrible day we see unfolding the reversal of the curse and the beautiful story of redemption and hope.