The Rise of the Micro-Church - Seedbed
close
Menu 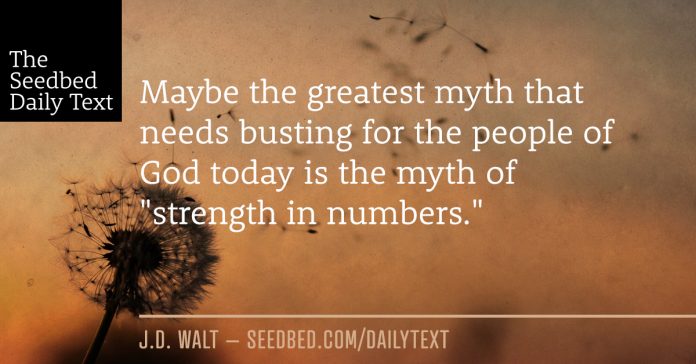 While Gallio was proconsul of Achaia, the Jews of Corinth made a united attack on Paul and brought him to the place of judgment. “This man,” they charged, “is persuading the people to worship God in ways contrary to the law.”

Just as Paul was about to speak, Gallio said to them, “If you Jews were making a complaint about some misdemeanor or serious crime, it would be reasonable for me to listen to you. But since it involves questions about words and names and your own law—settle the matter yourselves. I will not be a judge of such things.” So he drove them off. Then the crowd there turned on Sosthenes the synagogue leader and beat him in front of the proconsul; and Gallio showed no concern whatever.

In a city of around 100,000 people, Paul had maybe 50 or so converts. This sounds more like a fledgling AA community than it does an impending threat of a religious coup d’etat.

50 in 100,000 strikes me as statistically insignificant, yet it warranted a united and strategic attack from the “Jews of Corinth.” In present day terms, we could understand the attention were this an ISIS terror cell of 50 jihadists.

Come on “Jews of Corinth!” This is a church for crying out loud. And it’s a pretty small one at that. Where’s the threat?

Maybe the greatest myth that needs busting for the people of God today is the myth of “strength in numbers.” The Bible tells a diametrically opposite story. Remember Jericho? How about Gideon? Elijah? Daniel? Hannah? Mary? Jesus? The Twelve?

Maybe the Jews of Corinth remembered.

What if we remembered?

What is it about the size of a church or a group that so seduces us into assuming it is a strong church? Why do we tend to negate the potential of micro?