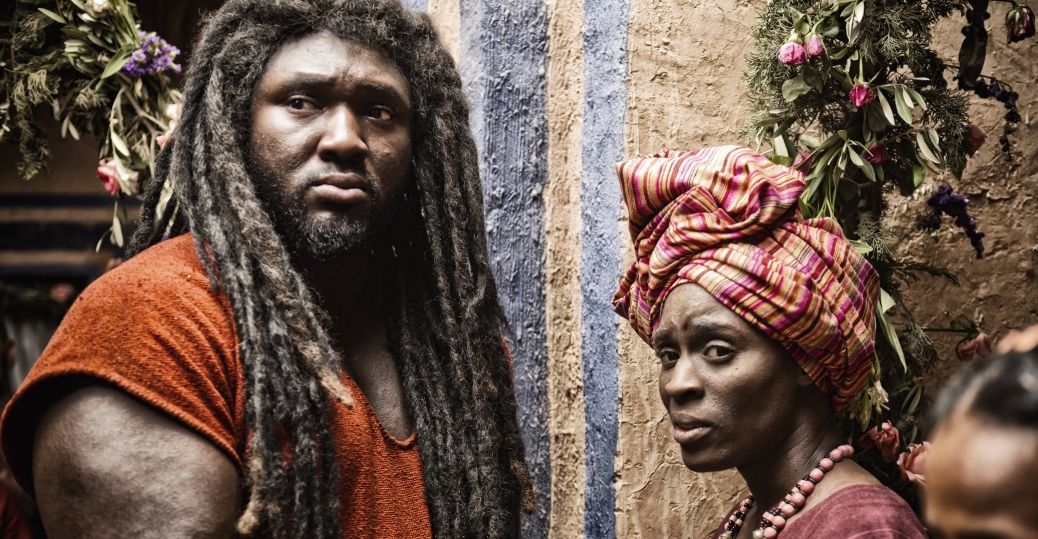 The ongoing series on the Bible produced by the History Channel displayed some puzzling decisions in its second episode. The story of Joshua at Jericho occurs, and then the program leaps to the story of Samson, mainly focusing on Samson and Delilah. Some might find it jarring to see Samson played by an African-American actor in what appears to be dreadlocks. While it’s certainly out of step with claims to be historically accurate in one sense, as I pondered it, I decided I liked it, both historically and artistically. For starters, here’s some context: seven facts from the biblical account of Samson need to be stressed in approaching this story that might help put the History Channel presentation in context. BTW, if you want more details, check out my commentary on the book of Judges.

Fact Number One: The Israelites were threatened with annihilation by the Philistines. If historical records outside the Bible are to be trusted, the Philistines played a huge role in the cataclysmic, crashing collapse of a 2000-3000 year old culture known by Archaeologists as the Bronze Age. The Bronze Age glowed with its achievements in civilization. The Pyramids of Egypt, the Sphinx, the massive capital of Ramesses the Great, the enormous mountaintop Hittite stronghold known as Hattusha, advances in mathematics, medicine, astronomy and metallurgy, not to mention literacy. By 2800 B.C.Sumerian scholars had developed the sexagesimal number system we still use for angles and time, the and had at least approximated the value of pi (math joke, by the way) and could solve for all the variables in the Pythagorean theorem without using the formula. They had evolved the city-state government, created a complex legal system based on principle, precedent, testimony and, okay, ordeal by drowning…In the realm of international law they perfected a system of treaties that allowed kings claiming universal hegemony to cooperate in a peer-polity system that kept the peace at least as well, maybe better, than any system of international law since. This culture, urbane, international, literate and sophisticated, stood for several thousand years.

But…in the decade or two surrounding 1200 B.C. this whole glittering culture came crashing down in flames. Lots of causes can be cited, but honestly, if there had been nobody there to ride down the Bronze Age, it would have weathered its other crises. But the Philistines, along with 8 or 9 other ancient peoples seen by the Egyptians as “barbarians,” were there. And ready. As the Bronze Age cultures entered a period of high stress and thinly stretched resources, fighters from the Aegean, northern Asia Minor, other fighters from tribal, pastoral groups known as the Shasu, Sutu and cultural rejects and drop-outs called Apiru all found themselves hitting the formerly impregnable urban centers of the great Bronze Age civilizations. And down they came. Among these, the Philistines appear the best organized, best armed and most dangerous military forces. About 1175 B.C. they camped on the southern coast of Canaan, the Gaza strip, and several decades later, decided they were ready. They wanted control of the travel and trade infra-structure of Canaan. But they had a problem. The Israelite settlers in the hill country of Canaan who’d been breeding like cats and building up their own cultural vitality, started pushing down from those higher hills into the low foothills called the Shephelah.So the Philistines knew: Israel must die. And the fiercest fighting force in the eastern Mediterranean looked up the Sorek Valley in the tribe of Dan and decided to take them.  So…Israel faced a determined, mortal foe.

Fact Number Two: Samson stood alone. Among all the Israelites threatened by the Philistines at that time, do you know how many people were ready to stand up and resist? How many willing to lay down their lives for God, home, hearth and land? One. We know some folks from the tribe of Dan just bugged out (cf. Judg. 18), abandoning the land God had given them in search of a more “manageable” inheritance. Samson alone was willing to take on the Philistines. To be sure, he gave his countryman many reasons to object. He broke rules. He defied his family. He broke God’s law.He violated the sacred vow that defined his identity. He played with the power he was given. But every stunt, every prank, and even every sin, wove into a tapestry of Yahweh’s “seeking an opportunity against the Philistines” (Judg. 14:4). It’s easy to disapprove of the one guy who is taking on the enemy when we’re safe hiding behind our cowardice, compromises and hypocrisy. Samson was like Gary Cooper in High Noon. All the good people in town fled, disapproved of the Cooper character’s violence. Gary Cooper walked into that dusty western street, guns strapped low on his hips, ready to die, but ready to face the outlaws, standing up for people who loathed him. That’s what Samson did.

Fact Number Three: we have no physical description of Samson except for his hair. We don’t know if he was handsome, big, buff or skilled. His power was supernaturally granted, so we can’t say anything about what he looked like.Also, the Bible says nothing about the link between Samson’s hair and his strength until Judges 16. Judges 13:5 mandates he not cut his hair, but nothing is said of that being the secret of his strength. In fact, nothing in his birth story even says he will be supernaturally strong. It only says he will “begin to save Israel from the Philistines” (Judg. 13:5). Then Judges 14-15, though stressing his great strength, make no explicit mention of Samson’s nazirite vow, though at key points he violates its terms. We readers only know of the vow from Judges 13.

Fact Number Four: Most of Samson’s career was uneventful. Yes, it’s true. If you read carefully, Judges 14-15 only give us a brief episode, a closely linked series of events that hook together causally and climax in Samson’s prayer at the end of Judges 15 in which God miraculously saves him from dying of thirst. At that point, the text then says “and he judged Israel 20 years.” In every other story in Judges, that line, either “the land rested for X years” or “he judged Israel X years,” isn’t just a report on how long the previous events lasted, they also form part of the death notice of the judge. Now if you look at the end of Judges 16, where Samson dies, the text, if the translators were careful, says “and he had judged Israel 20 years.” Judges 16 is essentially a long death notice for Samson. The conclusion is that essentially 20 years elapsed between the end of Judges 15 and the beginning of Judges 16. Judges 13-15 presents the rather dramatic opening of Samson’s career, beginning with some bad-boy rule-breaking behavior, but climaxing in a classic hero-battle against the Philistines in which Samson is saved through Yahweh’s answer to his prayer. Then pass 20 quiet years, and in Judges 16:1 Samson begins to stumble and finally collapse into the debacle that ends his career. If I’m right—and you can see the whole argument in my Judges commentary—most of Samson’s career was uneventful as he had blunted the first Philistine thrust up the Sorek Valley.

Fact Number Five: Samson receives an honorable notice at the end of the story. We are usually so blown away by Samson’s dramatic death that we miss something the ancient reader would have noticed: Samson’s burial notice. In the book of Judges, the only other “major” judge (i.e. military leader) whose burial is clearly noted is Gideon (Judg. 8:32). Samson was buried in his father’s grave. This implies that he was not considered unclean, not seen as a failure or disgrace to his family, but was cherished and honored. His family made the long trip to Gaza, got their kinsman’s body, brought him home and buried him in the family tomb. The OT repeatedly shows us how Israel, as a patriarchal, tribal culture, would not grant honorable burial to someone who had disgraced the community (E.g. see Jer. 22:18-19). Jephthah is said to be buried simply “in [one of] the cities of Gilead” (Judg. 12:7). So Samson’s burial tells us that despite his sin and failure, he must have done something good…something quite substantial, not only inspiring his family to give him an honored burial, but also inspiring the author to make a note of this.

Fact Number Six: Samson’s relationship with the “Spirit of the Lord” was not altogether a happy one. The “spirit of the Lord” is spoken of more times in the Samson story than for any other OT hero. We must be careful here. The “spirit of God” or “spirit of the Lord (Yahweh)” is not necessarily identical to the Holy Spirit, the third person of the Trinity. In the OT, Hebrew often uses “spirit of X” to characterize an influence, power or force that either characterizes someone or in some moment, seizes a person. So the “evil spirit from the Lord” that afflicts King Saul is not a demon sent by God to drive Saul nuts. Rather, it’s simply a hurtful, troubling mood that descends over him. So the “spirit of God” represents in Judges mainly the propulsive power of God, a kind of battle-frenzy or beserker spirit in the cause of Yahweh and his people. The full revelation of the trinity and of the Holy Spirit is at the end of the story, the New Testament. This spirit also does not treat Samson nicely! In Judg. 13:25 the spirit “began to stir” Samson. The verb translated “stir” is better translated “pound, beat, trouble.” It’s what a nightmare does. Then in 14:6,19 use a Hebrew term that has the idea of slashing or ripping through something, suggesting Samson is “ripped” by the spirit—classic beserker imagery.

Fact Number Seven: Contrary to the History Channel’s portrayal, Samson would not have been black. But…there is something, in my view, very right historically about their portrayal of Samson as of another race, and their particular choice of race could be telling in some good ways, whether they knew it or not. But that will have to wait for the next installment. Stay tuned!