Samson Wasn’t Black But I’m Glad the Actor Was

Samson Wasn’t Black But I’m Glad the Actor Was 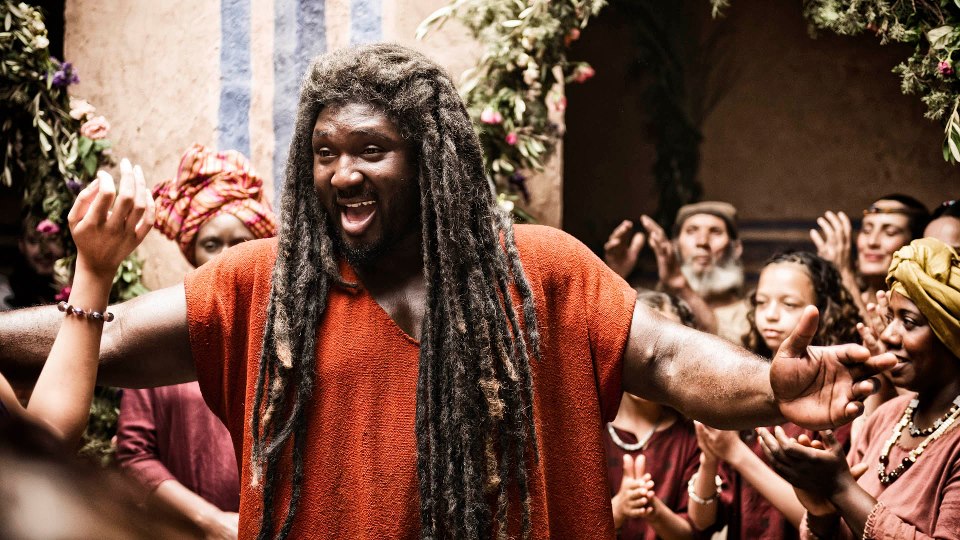 The History Channel’s episode featuring Samson totally freaked out a lot of viewers when Samson appeared portrayed by an actor of African ancestry, wearing dreadlocks! When I announced that I planned to offer a defense of the portrayal, from a historical perspective, one person actually wished me luck in “making the racist sensible and acceptable.” I am still trying to decide if he was insulting the History Channel or me!

I doubt that racisim motivated the History Channel in casting a black actor. Surely an army of consultants and diversity sensitivity specialists vet every show. The most accurate criticism might be that the producers attempted to insert ethnic diversity because it was politically correct, even if it was historically wrong. Or maybe they just wanted to mess with our heads a little, shake us up, make us see the story from a fresh perspective. That’s all possible. In some board room, some script meeting, the writers hashed this out and had reasons for doing it, and the reasons did not include racism, though I’m not privy to them.

I think it was great casting. But of all the reasons that the History Channel might have had, I’m certain that they were not thinking of the perspective I am about to share with you! As far as I can tell, they had no Old Testament or ancient Near Eastern specialists on their team. And some of what I’ll share here is stuff even many OT specialists would not know, simply because the discipline is huge and nobody can control all the data. Of course, this is hypothetical, though I think a very well supported hypothetical. If you’d like the footnotes and grim details, my commentary on Judges (pages 371-372, 378-382) will give you the bibliography as well as sources on the counter-arguments.

So…here are some relevant biblical data about Samson himself and his cultural identity gleaned from Judges 13-16. I’ve also popped a map in here so you can track the various locations mentioned.

Samson belonged to the tribe of Dan, originally located in the transitional zone between the highland watershed ridge and the coastal plain. We read that the “Amorites” harassed the Danites so that they abandoned their territory and migrated to the extreme north. The two hilltop villages of Zor’ah and Eshta’ol seem to have been the only towns held by the Danites, who had to look down on the fertile Sorek Valley, which they could not cultivate because of Philistine presence, or look across at the town site of Beth Shemesh, which again, Israelites could not occupy due to Canaanite presence. Dan is always referred to as the “camp of Dan” or the “clan [Heb. מִשְׁפָּחָה mishpakhah] of Dan.” Typically, a tribe is composed of many “clans” so this suggests a diminutive band. Samson’s family expresses great anxiety when he seeks to marry a Philistine woman, and generally Samson seems quite at home amidst the Philistines, especially their banquets. By contrast, every time Samson is depicted interacting with Israelites, the tension is overt. The Judeans actually sell him over to the Philistines! So just from the surface of the story in Judges 13-16, we expect to see Samson at odds with his own people.

Samson’s tribe, the tribe of Dan, was one of the most marginal of Israelite tribes, despite their figuring heavily in Judges 13-18. After Judges, the Danites as a tribe do not appear in the narrative of Samuel—Kings, and have little or no role anywhere else in the biblical narrative. Dan is even absent from the book of Revelation’s listing of the Israelite tribes (Rev 7:5-8), suggesting the Danites represent a kind of biblical-theological “dead end.” In addition to the Bible’s ambivalence about Dan, scholars puzzle over the ethnicity of the Danites, who do not seem to have meshed well with Israel. Jacob’s “blessing” hints that they were not fully accepted among the Israelites (Gen 49:16-18).

Dan will govern his people,
like any other tribe in Israel.
Dan will be a snake beside the road,
a poisonous viper along the path
that bites the horse’s hooves
so its rider is thrown off.
I trust in you for salvation, O LORD!

The first line about governing is a play on the Hebrew root of the word “Dan” which means, “judge, govern.” The “money” lines come next: Dan the snake, Dan the viper who strikes the horse, who pitches the rider off. Dan, who provokes the poet to cry for God’s salvation. This passage betrays a degree of alienation between

Dan and the rest of Israel. In addition, Judges 17-18 narrates how the Danites, after abandoning their divinely granted heritage, migrate north, slaughter a town solely because it was an easy mark, and set up a shrine featuring an image of Yahweh while the real house of God remained in Shiloh. The Danites don’t look so good, do they?

The Danites are associated with ships (5:17) and metallurgy (Exod 31:6; 35:34; 38:23; cf.2 Chr 2:13), neither of which characterizes Israel strongly, but both of which evoke the Sea Peoples—especially the Philistines (Cf. 1 Sam. 13:19-22). Arrestingly, one of the Sea Peoples mentioned in ancient texts bears a name linguistically cognate to Dan, once we allow for the way different ancient languages spelled the same words: danuna/denyen (Egyptian), dnym (Phoenician), and danaoi (Greek). The Philistines settled the southern coast, while other groups of Sea Peoples settled farther north. It would be reasonable to see the Danuna occupying the area around Joppa (modern Tel Aviv). This region would coincide with the territory allotted to Dan in Josh 19:40-46. So, if you’re still following me, the possibility exists that a segment of the tribe of Dan did not enter Canaan with the rest of their tribesmen, but originally belonged to the Danuna, a group among the Sea Peoples. They possibly fused with a smaller Israelite group, suggesting Dan was a composite, or hybrid tribe.

The Sea Peoples groups were not homogeneous, but consisted of at least nine distinct sub-groups. Nor were they unified. Some of the Sea Peoples were simply pirates and raiders, soldiers of fortune. Others, as depicted in the Memorial Temple inscriptions of Ramesses III at Medinet Habu, planned to settle, bringing carts loaded with family and property. Some of the groups included among the Sea Peoples even practiced circumcision. We know because the Egyptian pharaoh Merneptah records that to count the enemies slain in battle he collected the severed phalluses of the circumcised and the hands of the uncircumcised. Whether the Danuna specifically practiced circumcision remains unknown, but if they did, they would share an important cultural link with the Israelites. The Philistines, by contrast, during Iron I (1200-1000 B.C.) are the quintessential “uncircumcised” peoples of the OT. The overwhelming preponderance of pejorative references to “uncircumcision” or to circumcision as a major cultural marker for Israel occur in contrast with the Philistines. Perhaps the (circumcised?) Danuna felt a cultural distance from their Sea Peoples confederates, the uncircumcised Philistines, and found Israelite affiliation more congenial, much as the Canaanite inhabitants of Shechem did. Dan felt cramped amidst an expanding Judah and Ephraim on the east and

north, the aggressive Philistines on the south, and the solid Canaanite enclaves at Beth Shemesh and Gezer. Maybe that’s why most of the Danites (possibly including their Danuna population) sought fresh territory, an easier conquest, in the far north ca. 1100 BC. Perhaps they were never a large or vigorous group, just a “camp” or “clan.” This sense of confinement to the hill villages of Zorah and Eshtaol features strongly in the Samson stories.

So…Samson was a Danite. If the sketch above is accurate, then Samson could well have been of another race from the Israelites. His father’s name, Manoah, seems a good Hebrew name, but the author never tells us his mother’s name. She also challenges some of her husband’s conventional beliefs about God. The angel’s appearance to her, his enjoining on her (as well as on her son) the terms of the Nazirite vow, and Samson’s evident closeness to his mother, all could suggest she perhaps was of the “other” race, but had come under Israel’s covenant with Yahweh.  We know from several passages in Joshua that a good many persons living in Canaan, not of Israelite descent, embraced Israel’s faith and accepted the covenant (Josh. 2, 8:30-35 “foreigner;” Josh. 9; Josh. 24). This also would explain why Manoah could not effectively block his son’s marriage to a foreign woman…maybe he himself had done the same!

So that’s admittedly lot of dot-connecting, and maybe even some dot-supplying! If Samson came from among the Danuna, or at least, from a non-native Israelite woman naturalized as an Israelite, he was a descendant of Sea Peoples. Since these were associated with the Philistines, Israel’s mortal enemies, Samson’s easy fraternizing with Philistines seems more natural and the undercurrent of hostility from other Israelites makes sense. Also, his parents’ anxiety about his mate choice could be more than merely Israelites wanting their boy to marry in the faith. If they were “naturalized” Israelites of non-Israelite background, then they’d be doubly anxious to secure acceptance and much disturbed over their son’s careless congress with the alien, the other, the enemy.

So…if I were making a movie about Samson, I’d not make him ruggedly handsome. I’d make him visibly of another race, with a mom of another race, distinct from “my” Israelites. And I’d choose a race and other cultural trappings that connoted tension, alienation, hostility. Maybe also…I’d want to challenge my “majority culture” viewers to ponder whether salvation might in fact come from that distrusted “other” of the wrong race, wrong culture, wrong style. That maybe God can work powerfully through someone who just doesn’t quite fit my image of “Hero, Savior of Israel.”

Which seems to be what the History Channel did.

Now that I think of it…that’s exactly what God did too.

Samson Wasn't Black But I’m Glad the Actor Was