The Center of the Story - Seedbed
close
Menu 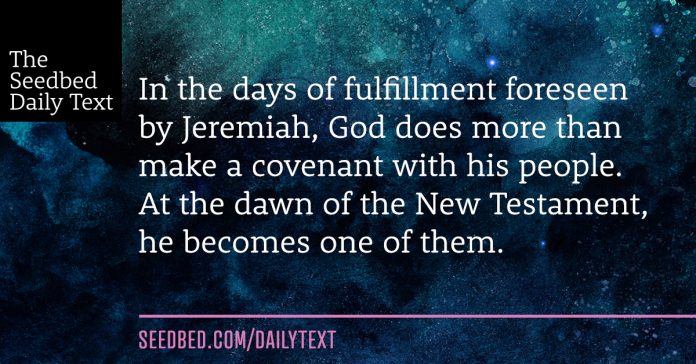 14 “‘The days are coming,’ declares the Lord, ‘when I will fulfill the good promise I made to the people of Israel and Judah.
15 “‘In those days and at that time
I will make a righteous Branch sprout from David’s line;
he will do what is just and right in the land.
16 In those days Judah will be saved
and Jerusalem will live in safety.
This is the name by which it will be called:
The Lord Our Righteous Savior.’
17 For this is what the Lord says: ‘David will never fail to have a man to sit on the throne of Israel, 18 nor will the Levitical priests ever fail to have a man to stand before me continually to offer burnt offerings, to burn grain offerings and to present sacrifices.’”
19 The word of the Lord came to Jeremiah: 20 “This is what the Lord says: ‘If you can break my covenant with the day and my covenant with the night, so that day and night no longer come at their appointed time, 21 then my covenant with David my servant—and my covenant with the Levites who are priests ministering before me—can be broken and David will no longer have a descendant to reign on his throne. 22 I will make the descendants of David my servant and the Levites who minister before me as countless as the stars in the sky and as measureless as the sand on the seashore.’”

Of course Jesus is fully God. We wholeheartedly proclaim his divinity and worship him for it. But in the Incarnation he becomes fully human. And—perhaps there is more mystery here than we realize—he becomes a very particular kind of human.

In the Old Testament, God repeatedly makes covenant with the Jewish people. In this passage the prophet Jeremiah recounts these “good promises” with echoes of the anchors of their history. He makes allusions to Adam and Eve, and the covenant with day and night established in the Creation story. He sparks memories of Abraham and Sarah, pointing to the countless stars in the sky and measureless sand by the sea. And he explicitly speaks of the unrivaled reign of David and the Levitical Law of Moses. He reminds us of the covenant movements through the grand sweep of Scripture. But in the days of fulfillment foreseen by Jeremiah, God does more than make a covenant with them. At the dawn of the New Testament, he becomes one of them.

We understand that Jesus was born for all people, but perhaps sometimes we forget that Jesus was born into a specific race of people, into a long cultural heritage and history. He carried distinct physical features (the tone of his skin, the color of his eyes, inherited family traits) that identified him with that people and he always fully embraced that identity. He was born into a race of people who had experienced hundreds of years of slavery, a trial they could never forget. He was born into a race of people who knew what it meant to be conquered by force. Repeatedly they were violently attacked and carried away from their homeland and into exile.

At the time of his birth, his people were living under the oppressive rule of the Roman Empire. The very dust beneath their feet had been promised to them by God Himself. Yet Caesar, in all of his might, claimed it as his own and instituted a reign of systematic injustice. Taxes, laws, enforcement tactics—Jesus’ people were at the mercy of the system. From the very first glance of his face and skin, from the very first sounds of his accent, from the things that he ate and the ways that he worshipped, it was undeniably clear that Jesus was firmly located and numbered among the oppressed. And that is exactly where he wanted to be. And that is exactly where we still find him.

The mystery of the Incarnation will always baffle and amaze anyone who is even half-awake. But perhaps it’s this particular part of the mystery that is asking to be explored in days like these. To remember that ours is a story of a God who joins with the oppressed, and shows up on the margins. Which transforms the margins from the forgotten edge of the page into the center of the whole story. He still invites us to seek him out and find him there. And more than that, to join him. Just as he has joined us.