Jesus spoke to them again in parables, saying: “The kingdom of heaven is like a king who prepared a wedding banquet for his son. He sent his servants to those who had been invited to the banquet to tell them to come, but they refused to come.
“Then he sent some more servants and said, ‘Tell those who have been invited that I have prepared my dinner: My oxen and fattened cattle have been butchered, and everything is ready. Come to the wedding banquet.’
“But they paid no attention and went off—one to his field, another to his business. The rest seized his servants, mistreated them and killed them. The king was enraged. He sent his army and destroyed those murderers and burned their city.
“Then he said to his servants, ‘The wedding banquet is ready, but those I invited did not deserve to come. So go to the street corners and invite to the banquet anyone you find.’ So the servants went out into the streets and gathered all the people they could find, the bad as well as the good, and the wedding hall was filled with guests.”
—Matthew 22:1–10

For three days, we have looked at the call to servanthood from a personal perspective. Let’s now consider the call and the example from the perspective of the church, as an expression of the kingdom.

Jesus’ parable of the kingdom, in which He likened the kingdom to a marriage feast, is our focus. Have you ever noticed the fact that Jesus not only went to parties, He talked a lot about them? It’s interesting to stop and consider how many of His parables include a party.

The parable of the five wise and the five foolish virgins is built around a wedding party. In another parable, a woman loses a coin, and when she finds it, she calls her neighbors and says, “Let’s celebrate.” And, perhaps the most famous one, the story of the prodigal son, ends with a party—with a father, his family, and all of the servants making merry because a lost son has come home.

In the parable we consider today, Jesus said the kingdom of heaven could be compared to a king who gave a marriage feast for his son. When it looked as though no one was coming to the party, the king was disappointed; no one was accepting his invitation. So he sent his servants out to those who had been invited and tried to convince them to come. “Come on, the table is spread, the party is ready!” But those who had been invited made light of the invitation, offered ridiculous excuses, and refused to come.

This made the king angry. He ordered his troops to destroy people who had been invited and to burn their city. But, he didn’t forget the party. The party had to go on, so he sent his servants out into the streets and the alleyways of the city to find as many people as they could find, and bring them in.

The servants went everywhere—into the center city as well as into the suburbs. On the wrong side as well as on the right side of the track; into every ethnic enclave; among the impoverished, as well as among the rich. Soon the wedding hall was filled with people and the king was able to celebrate his son’s wedding.

Jesus was telling the story for a very specific purpose; the people to whom He was talking needed to hear that God had first invited into His kingdom a chosen people, the Jews, but they had not responded. They made ridiculous excuses—they even persecuted and killed the prophets. So, since those originally invited wouldn’t accept the invitation, God finally sent His messengers out into the world’s unlikely highways and everybody was invited to come in, including, especially, the Gentiles. That’s the primary meaning of the parable.

Accepting that point, look at the crowd that came to the party. It must have been a motley crew—all elements of society, from every walk of life. And Jesus says, “That’s what the kingdom is going to be like, and that’s what the church should represent.”

I doubt if anyone has understood this more in modern times than Gen. William Booth, founder of the Salvation Army. The American poet Vachel Lindsey, in his poem “General William Booth Enters into Heaven,” pictured William Booth entering heaven and the procession following in this way:

That’s a dramatic description of those who are going to stumble into the king’s great celebration when the last trumpet is sounded and the kingdom is established.

There are two questions the church must ask herself: Who are the persons not like us who should receive a first invitation from us? Are we willing to go out into the city and compel the unlikely to come to the party? 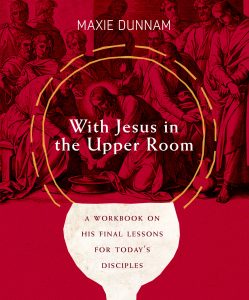 Enjoy this entry? Get With Jesus in the Upper Room by Maxie Dunnam. In this seven-week study, Maxie Dunnam leads readers through John 13–17 to this most precious legacy of Jesus’ teaching, the distillation of His thought and message—what He really wants us to hear. We are His modern friends, to whom He speaks as lovingly as He did to His friends in the Upper Room.