The Difference Between "If It's Your Will," and "If You Are Willing"
close
Menu

When Jesus came down from the mountainside, large crowds followed him. 2 A man with leprosy came and knelt before him and said, “Lord, if you are willing, you can make me clean.”

3 Jesus reached out his hand and touched the man. “I am willing,” he said. “Be clean! ”Immediately he was cleansed of his leprosy. 4 Then Jesus said to him, “See that you don’t tell anyone. But go, show yourself to the priest and offer the gift Moses commanded, as a testimony to them.”

There’s a word that sums up this story and a number of those following: Desperation. Before we get to that, though, let’s notice how we are moving down the mountainside with Jesus after he has just taught us the celebrated Sermon on the Mount. Now we will see Jesus perform a series of ten miracles. One of the under-celebrated aspects of the ways of the Gospel and the Kingdom of God is the way teaching about the Kingdom (or the rule of God) precedes demonstrations of the Kingdom (or the rule of God). Could it be that another reason we do not see many demonstrations of this Kingdom is because we are not properly taught about the nature of this Kingdom? Just asking. Do not underestimate the importance of teaching in the work of making disciples. I consider that a large part of what I’m trying to do with the Daily Text.

Meanwhile, back at the ranch, a leper found his way to Jesus and knelt before him. Do you realize how desperate a leper had to be to come within a hundred yards of people without leprosy, not to mention the Son of God. The leper possessed a quality and tenacity of faith known to the Kingdom as desperation. The leper was sick and tired of being sick and tired. He had come to the place where he knew the cost of taking this risk was less than the cost of staying in his predictable and painful situation.

My friend and mentor, Maxie Dunnam, once put it this way, “Most people prefer the hell of a predictable situation rather than risk the joy of an unpredictable one.” So often it takes an impossible situation or need to bring us beyond our own respectability and into the realm of desperation before God. And so often, this is precisely where God meets us.

Two more observations. First, this prayer, “If you are willing you can make me clean,” is a different prayer than, “God, if it is your will, would you heal thus and so.” The former is going all in. The latter is hedging one’s bet. Second, note the three extraordinary words spoken by Jesus, “I am willing.”

I want us to stop there and press rewind on our DVR’s and watch the instant replay on this scene and these words and what happens next about a dozen times. It’s called meditating on Jesus.

1. What keeps you from laying hold of these three words of Jesus, “I am willing,” in your own situation? Could it be your fear of being disappointed? Would you be willing to risk that? 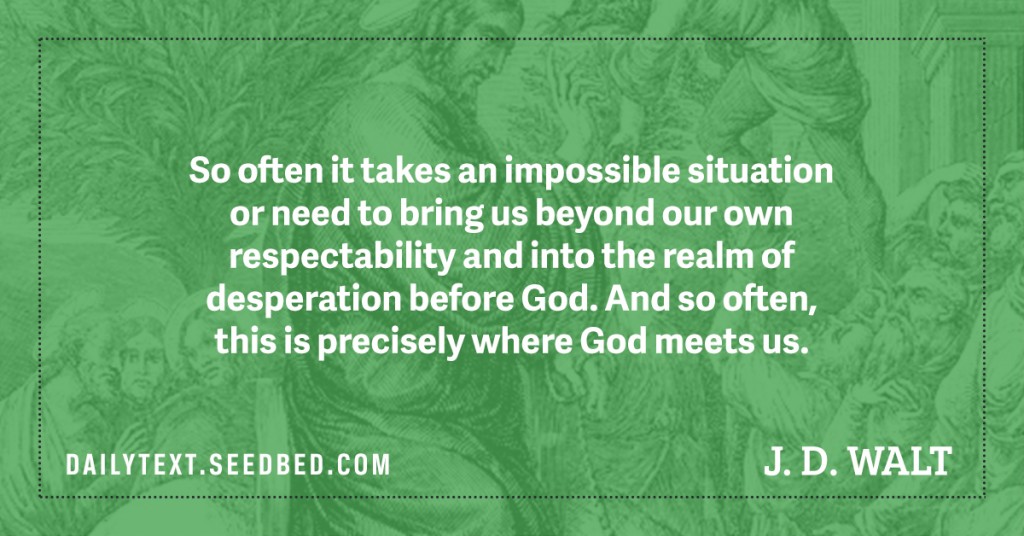 J.D. Walt, Seedbeds Sower in Chief, is a Bond Slave of the Lord Jesus Christ. jd.walt@seedbed.com.

© Seedbed 2021
The Difference Between "If It's Your Will," and "If You Are Willing"
MORE STORIES