The Difference Between Readiness and Preparedness - Seedbed
close
Menu

“At that time the kingdom of heaven will be like ten virgins who took their lamps and went out to meet the bridegroom. 2 Five of them were foolish and five were wise. 3 The foolish ones took their lamps but did not take any oil with them. 4 The wise ones, however, took oil in jars along with their lamps. 5 The bridegroom was a long time in coming, and they all became drowsy and fell asleep.

6 “At midnight the cry rang out: ‘Here’s the bridegroom! Come out to meet him!’

7 “Then all the virgins woke up and trimmed their lamps. 8 The foolish ones said to the wise, ‘Give us some of your oil; our lamps are going out.’

9 “‘No,’ they replied, ‘there may not be enough for both us and you. Instead, go to those who sell oil and buy some for yourselves.’

10 “But while they were on their way to buy the oil, the bridegroom arrived. The virgins who were ready went in with him to the wedding banquet. And the door was shut.

13 “Therefore keep watch, because you do not know the day or the hour.

There’s a difference between being prepared for something and being ready for it. In today’s text we see a very clear picture of the difference. Were the bridesmaids ready? They waited and waited and waited and the groom kept delaying and delaying and delaying. It’s impossible to be “ready” to go when you do not know the time at which to go. As a consequence, none of the bridesmaids were ready when the groom arrived.

The bridegroom was a long time in coming, and they all became drowsy and fell asleep.

Were the bridesmaids prepared? Do you see the difference in the question? Here’s the answer.

The foolish ones took their lamps but did not take any oil with them. 4 The wise ones, however, took oil in jars along with their lamps.

None were ready and only half of them were prepared. Five of the bridesmaids prepared for the possibility of delay. Five did not. The former are called wise and the latter foolish. It brings to mind one of Jesus’ earlier analogies making the same kind of comparison.

No one is every really “ready” for the hurricane. The issue is preparedness. Growing up I always envied the kids who had storm shelters. We all lived in fear of the terror of tornadoes. Only the kids with storm shelters knew they would be fine. None of us could be ready, but they were prepared. Because we can not know when Jesus will return there is no way for us to know when we need to be ready. He may come when we are asleep. That will be fine if we are prepared.

All of the bridesmaids thought they were ready. That’s the problem. Showing up does not equal preparedness. Preparedness means bringing the extra jar of oil. Now, my mother would have considered preparedness bringing enough extra oil (aka “snacks”) to share with the kids who didn’t bring any—and there’s a lesson there—but it’s beyond our scope today.

We have lived through a century that has confused readiness and preparedness. It seems we have worked to convince people that if they “pray the prayer” to “accept” Jesus they will be ready. As a result, so many of our churches, at best, are filled with people whose notion of Christian faith is showing up for church and doing a few good deeds along the way. Meanwhile, so many self-proclaimed Christians live with such indifference to the Word of God and the Spirit of God their lives tell another story altogether.

Preparedness cannot be equated with a mere decision to follow Jesus. Preparedness means ongoing discipleship to Jesus. To be clear. We are saved by grace alone, not our discipleship.  Our discipleship is the evidence that grace—the unmerited favor of God purchased for us through the life, death, resurrection, ascension and return of His Son— has become more to us than our RSVP for the wedding.

A life prepared for the end will be a life lived with ever deepening preparedness all along the way. And that can begin right now.

Lord Jesus, we don’t want to show up one day at the door with our baptismal certificate and a few photos of service projects we did—saying, “Lord! Lord!”—only to hear you say, “I never knew you.” We—no, I—want to be your disciple. Prepare me, Lord Jesus, as only you can. I don’t want to be a Christian in name alone. I want to be a real Christian, one whose life becomes an awe inspiring spectacle of your Love at work in the world. Shake me free from the inertia of my indifference and set me on a new path marked by your indwelling Spirit. For your glory and my good, Amen. 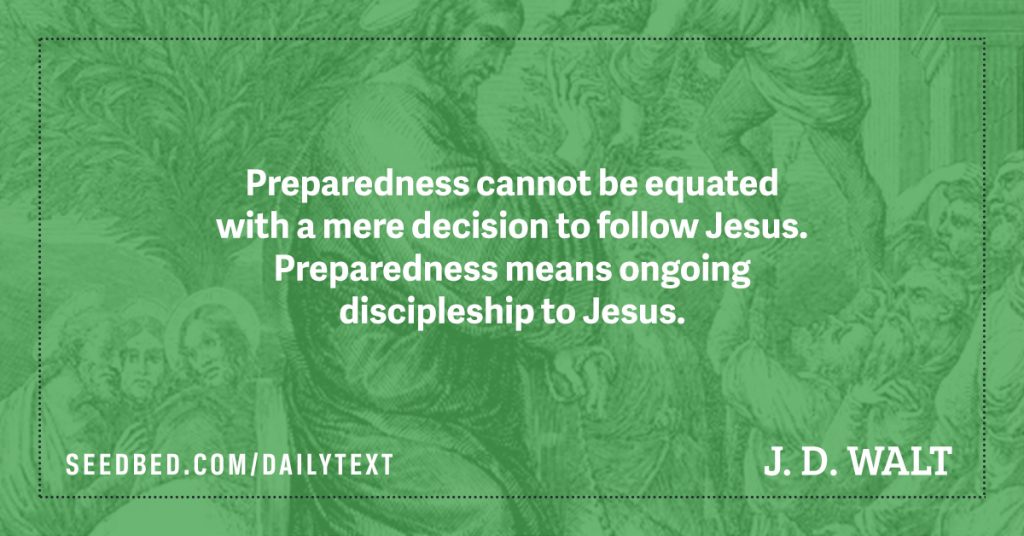 1. Ready or Prepared? See the difference? Reflect on that.

3. Reflect on the nuance between the evidence of salvation as a decision made versus discipleship enacted?

© Seedbed 2021
The Difference Between Readiness and Preparedness
MORE STORIES