16 “I am sending you out like sheep among wolves. Therefore be as shrewd as snakes and as innocent as doves. 17 Be on your guard; you will be handed over to the local councils and be flogged in the synagogues. 18 On my account you will be brought before governors and kings as witnesses to them and to the Gentiles. 19 But when they arrest you, do not worry about what to say or how to say it. At that time you will be given what to say, 20 for it will not be you speaking, but the Spirit of your Father speaking through you.

“I am sending you out like sheep among wolves.

What is it like to be a sheep among wolves? For starters it means you are in a massive power imbalance. It’s the equivalent of bringing a knife to a gunfight. The sheep doesn’t stand a chance. Wolves mercilessly kill sheep. Everyone knows this. It means to be very vulnerable in the midst of a very dangerous situation. It means you don’t have a fighting chance. This is how Jesus sends out his disciples? Wow! But he does give them some interesting advice on how to handle this dilemma:

Therefore be as shrewd as snakes and as innocent as doves.

What on earth does this mean? It sounds good, until you start trying to figure it out. How does one act with shrewdness and naivety at the same time? How is a sheep supposed to also act like a snake and a dove at the same time? Let’s call it the disciple’s quandary.

This text gets tossed around a lot when it comes to the way Christians are supposed to interface with the cold cruel world. It’s akin to the idea of living in the world but not of the world; another easy aphorism to cite but next to impossible to actually define.

I think we routinely miss the point with this bit of teaching. We think it is actually possible to figure out. I’m convinced Jesus was not giving practical advice here on how to be a sheep among wolves. I believe he was revealing to them the impossible situation they now faced by virtue of following him. It was like telling them to feed thousands of people with no food. It was like the time he said it was easier for a camel to go through the eye of a needle than for a rich person to enter the kingdom of heaven. It was like Jesus telling Peter to step out of the boat and walk on water. Jesus was telling his disciples that they had absolutely no hope of accomplishing his mission without absolute reliance on him. Remember yesterday’s post about going out on mission in a way conventional wisdom would call completely unprepared? Same idea.

So why do I think Jesus didn’t actually intend for us to be wise as serpents and innocent as doves? Because of what he would say next:

At that time you will be given what to say, 20 for it will not be you speaking, but the Spirit of your Father speaking through you.

Discipleship is not about becoming a cunning Christian chess master in our dealings with the world. Life as a disciple of Jesus Christ is about the ongoing journey of learning to depend entirely on the Holy Spirit in all things at all times. It sounds challenging. It is—but not how we think. The only way to live as sheep among wolves—shrewd as snakes and innocent as doves—is to be abandoned to Jesus in childlike trust. It’s not about our “leadership” skills. It’s about the quality of our trust.

1. So what do you think about this theory that we aren’t supposed to spend our time trying to figure out what it means to be a snake and a dove at the same time?

2. Does it concern you to live life as sheep among wolves? How do you respond to this reality? More self protection? More trusting vulnerability?

3. How are you growing in your dependence on the Holy Spirit in all things? What are the signs of this growth to you? Where are you most challenged? 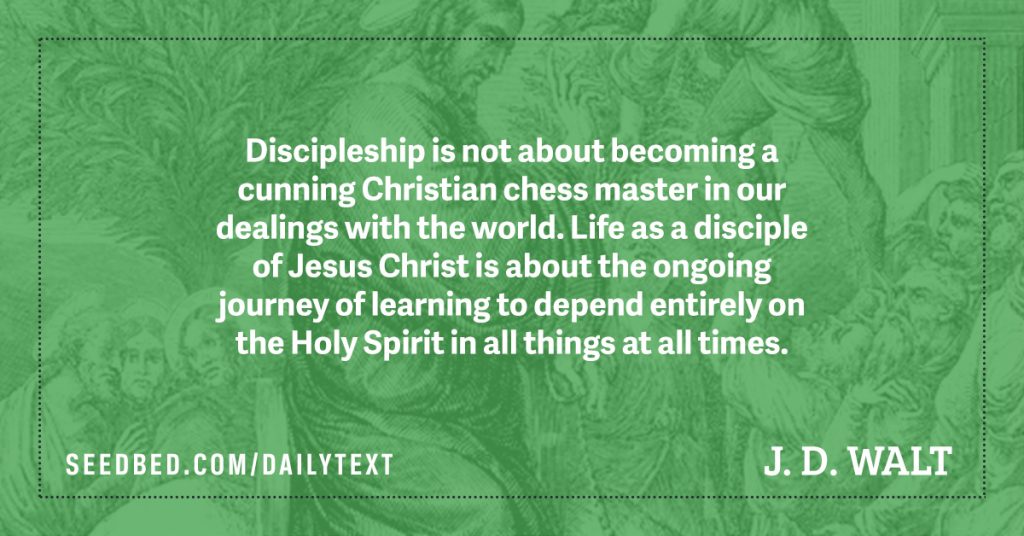