The Fuller Sense of the Psalms: Psalm 68 - Seedbed
close
Menu 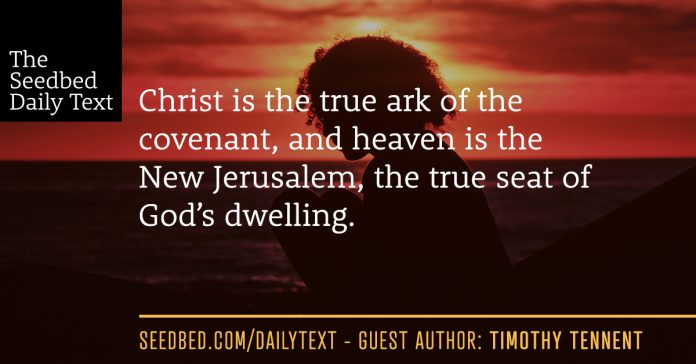 1 May God arise, may his enemies be scattered;
may his foes flee before him.
2 May you blow them away like smoke—
as wax melts before the fire,
may the wicked perish before God.
3 But may the righteous be glad
and rejoice before God;
may they be happy and joyful.

15 Mount Bashan, majestic mountain,
Mount Bashan, rugged mountain,
16 why gaze in envy, you rugged mountain,
at the mountain where God chooses to reign,
where the Lord himself will dwell forever?
17 The chariots of God are tens of thousands
and thousands of thousands;
the Lord has come from Sinai into his sanctuary.
18 When you ascended on high,
you took many captives;
you received gifts from people,
even from the rebellious—
that you, Lord God, might dwell there.

19 Praise be to the Lord, to God our Savior,
who daily bears our burdens.
20 Our God is a God who saves;
from the Sovereign Lord comes escape from death.
21 Surely God will crush the heads of his enemies,
the hairy crowns of those who go on in their sins.
22 The Lord says, “I will bring them from Bashan;
I will bring them from the depths of the sea,
23 that your feet may wade in the blood of your foes,
while the tongues of your dogs have their share.”

28 Summon your power, God;
show us your strength, our God, as you have done before.
29 Because of your temple at Jerusalem
kings will bring you gifts.
30 Rebuke the beast among the reeds,
the herd of bulls among the calves of the nations.
Humbled, may the beast bring bars of silver.
Scatter the nations who delight in war.
31 Envoys will come from Egypt;
Cush will submit herself to God.

32 Sing to God, you kingdoms of the earth,
sing praise to the Lord,
33 to him who rides across the highest heavens, the ancient heavens,
who thunders with mighty voice.
34 Proclaim the power of God,
whose majesty is over Israel,
whose power is in the heavens.
35 You, God, are awesome in your sanctuary;
the God of Israel gives power and strength to his people.

Praise be to God!

There is an important phrase that all theological students learn but that is not widely recognized among laypeople. It is the Latin phrase sensus plenior, meaning “fuller sense” or “fuller meaning.” It refers to the fact that the authors of Scripture often wrote or spoke of certain realities, not realizing that they would be fulfilled or realized in ways that were even greater than they imagined. A classic example is found in Isaiah 7:14, where the prophet Isaiah tells King Ahaz that a sign of God’s deliverance is that a young maiden will give birth to a child whose name will be called Immanuel. It was, at one level, about God’s promise to defeat Ephraim and Syria, but it was later seen as a deeper promise fulfilled by Jesus Christ himself who would deliver us from an even greater foe.

Psalm 68 is another great example of sensus plenior. The immediate context is David bringing—or restoring—the ark of the covenant up from the house of Obed–Edom to the temple in Jerusalem. The ark had been captured by the Philistines and, later, returned and housed with an Israelite family, but was now being brought up in triumph. The psalm places the entire glorious process into the larger context of how God has gone before and led his people from Mount Sinai, through the wilderness and into the Promised Land. In short, it places the immediate return of the ark into the larger context of God’s greater work on behalf of his people from Sinai to sanctuary (vv. 1–17). It is also a reminder that the ark was viewed by the Jewish people as a kind of mobile Mount Sinai—i.e., a way for the presence of God that had met them on Mount Sinai to go with them through the wilderness and eventually into Jerusalem. The ark becomes the link between Sinai and Jerusalem.

Verse 18 celebrates the moment when the ark ascends the temple mount to its resting place, thereby making the final link between Mount Sinai and the temple. The triumphant moment is compared to the ancient practice of arriving home after a difficult but victorious battle. The troops would march into the city, with their enemies in captivity behind them. The psalm declares, “When you ascended on high, you led captives in your train; you received gifts from men.”

The New Testament believers read this verse with fresh eyes. They saw it in a sensus plenior. That triumphant event foreshadowed the even greater event of the ascension of Christ. Ephesians 4:8 quotes Psalm 68:18. Christ is the true ark of the covenant (i.e., the mercy seat, where forgiveness can be found); and heaven is the New Jerusalem, the true seat of God’s dwelling. The captives are no longer God’s enemies, but his former enemies who have now been reconciled and called his children. The gifts are no longer reparations given by enemies to their victors, but the gifts of God bestowed upon his redeemed people!