The Fundamental Fundamentals of Discipleship to Jesus - Seedbed
close
Menu

23 That same day the Sadducees, who say there is no resurrection, came to him with a question. 24 “Teacher,” they said, “Moses told us that if a man dies without having children, his brother must marry the widow and raise up offspring for him. 25 Now there were seven brothers among us. The first one married and died, and since he had no children, he left his wife to his brother. 26 The same thing happened to the second and third brother, right on down to the seventh. 27 Finally, the woman died. 28 Now then, at the resurrection, whose wife will she be of the seven, since all of them were married to her?”

29 Jesus replied, “You are in error because you do not know the Scriptures or the power of God. 30 At the resurrection people will neither marry nor be given in marriage; they will be like the angels in heaven. 31 But about the resurrection of the dead—have you not read what God said to you, 32 ‘I am the God of Abraham, the God of Isaac, and the God of Jacob’? He is not the God of the dead but of the living.”

33 When the crowds heard this, they were astonished at his teaching.

Here we go again. Today’s convoluted test from the Sadducees feels to me like something between a law professor’s hypothetical and, “How much wood could a woodchuck chuck if a woodchuck could chuck wood?” One thing is for sure. I wouldn’t want to be the eighth husband of a woman who had buried the prior seven. ;0)

The Sadducees did not believe in the resurrection from the dead and they were attempting to present an impossible scenario that would all but disprove it. They should have known Jesus had the Ace of Spades.

Jesus replied, “You are in error because you do not know the Scriptures or the power of God. 30 At the resurrection people will neither marry nor be given in marriage; they will be like the angels in heaven.

I think there’s a word in this that needs broader amplification and application. You saw it.

“You are in error because you do not know the Scriptures or the power of God.

He brings us back to the two fundamental fundamentals of discipleship: The Word of God and the Spirit of God. Do we know the Scriptures? Do we know the power of God? There is a real sense that unless we “know” both we know neither. And let’s be clear. This is not a knowing built from amassing knowledge (as helpful as good biblical knowledge can be). It is a knowing that comes out of an abiding relationship.

If we do not know the Scriptures or the power of God we can be confident that we are in error.

Lord Jesus, thank you for saying things so clearly. Thank you for your Word. Thank you for becoming that Word in the form of a human being. Thank you for the Holy Spirit and for giving us the perfect demonstration of what it looks like when a human being lives by the Word and the Spirit. Disciple us. Yes, bring our discipleship to you into a new frame; into a depth and simplicity that is arresting and compelling. We ask this in your name and for the sake of the World you love. Amen. 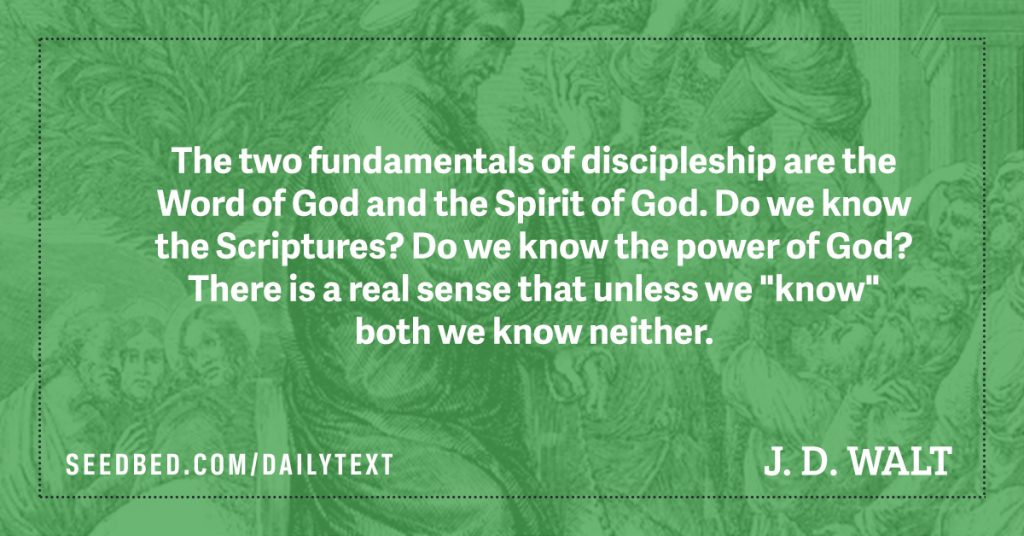 1. So how about you? Do you know the Scriptures? How about the power of God?

2. How are you growing in your “knowing” of the Scriptures and the power of God?

3. What would taking a significant next step look like for you in these matters?

© Seedbed 2021
The Fundamental Fundamentals of Discipleship to Jesus
MORE STORIES