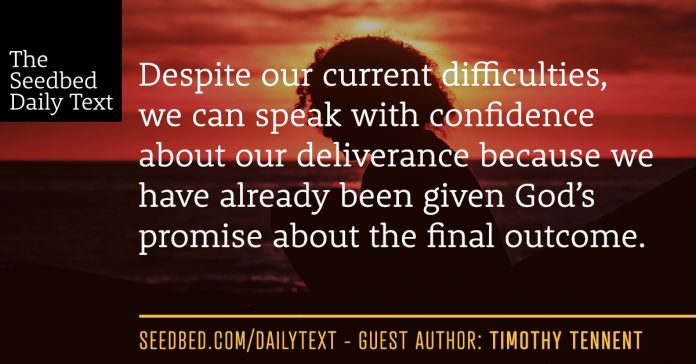 1 Be merciful to me, my God,
for my enemies are in hot pursuit;
all day long they press their attack.
2 My adversaries pursue me all day long;
in their pride many are attacking me.

5 All day long they twist my words;
all their schemes are for my ruin.
6 They conspire, they lurk,
they watch my steps,
hoping to take my life.
7 Because of their wickedness do not let them escape;
in your anger, God, bring the nations down.

8 Record my misery;
list my tears on your scroll—
are they not in your record?
9 Then my enemies will turn back
when I call for help.
By this I will know that God is for me.

12 I am under vows to you, my God;
I will present my thank offerings to you.
13 For you have delivered me from death
and my feet from stumbling,
that I may walk before God
in the light of life.

This psalm opens with David’s enemies in relentless pursuit. He has fled to Achish, king of Gath, where he is forced to feign madness, only to escape from Gath to the cave of Adullam, only then to flee from the caves to the forests of Hereth (1 Sam. 21:10–14; 22:1–5). The force of David’s words re-creates for us the vivid sensation of this period: “O God . . . men hotly pursue me; all day long they press their attack” (v. 1). If this were not enough, he has other enemies who are focused not on the hot pursuit, but on the destruction of his character. Just as the one group is physically pursuing him, this second group “twist [his] words” (v. 5) and “conspire” against his life (v. 6). Yet, in the midst of this, he recognizes that none of this compares with the power of God’s sustaining grace: “in God I trust and am not afraid. What can mere mortals do to me?” (v. 4). This same affirmation is repeated in verse 11.

How can David have such assurance in the face of this relentless, double-edged trial? There are two reasons, both of which should strengthen us as well. First, David is confident because he knows that God knows every detail of his circumstance. David does not worship a God who is distant and remote, but one who is intimately acquainted with all his ways. He says in verse 8 that God knows his lament and, in fact, has kept a record of every tear David has cried in a divine scroll of remembrance. Think about that! God knows every single tear you have cried in your times of anguish and difficulty.

The second reason is more subtle and requires a careful reading of the last verse. The entire psalm has been written with the force of the present tense and the anticipation of the future. Suddenly, in the final verse, David switches for the first time to the past tense, which implies that something has already happened. Surprisingly, David declares, “For you have delivered me from death and my feet from stumbling, that I may walk before God in the light of life” (v. 13). We have already seen a hint of this in Psalm 54. Patrick Reardon insightfully refers to this as a special perspective that the people of God can have whereby the “future itself becomes a sort of narrative past.” In other words, even though David is still being pursued and daily slandered, his confidence in God’s deliverance is so great that he is, by faith, transported to the future, so he can, even now, look back on his troubles and speak as if God had already delivered him! This future as narrative past is one of the great gifts to the Christian.

I know people who cannot watch a playoff game in baseball or football unless they record it and watch it later once they know the outcome, lest they be caught up in anxiety during the game. This is analogous to the situation we are in as Christians. Despite our current difficulties, we can speak with confidence about our deliverance, almost as a past experience, because we have already been given God’s promise about the final outcome.