The God of the Impossible - Seedbed
close
Menu 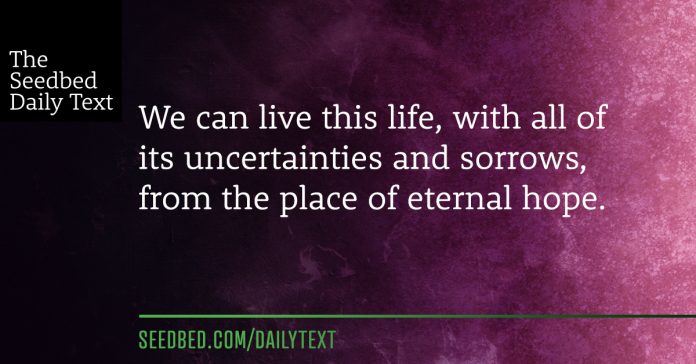 When Herod was king of Judea, there was a Jewish priest named Zechariah. He was a member of the priestly order of Abijah, and his wife, Elizabeth, was also from the priestly line of Aaron. Zechariah and Elizabeth were righteous in God’s eyes, careful to obey all of the Lord’s commandments and regulations. They had no children because Elizabeth was unable to conceive, and they were both very old.

One day Zechariah was serving God in the Temple, for his order was on duty that week. As was the custom of the priests, he was chosen by lot to enter the sanctuary of the Lord and burn incense. While the incense was being burned, a great crowd stood outside, praying. While Zechariah was in the sanctuary, an angel of the Lord appeared to him, standing to the right of the incense altar. Zechariah was shaken and overwhelmed with fear when he saw him. But the angel said, “Don’t be afraid, Zechariah! God has heard your prayer. Your wife, Elizabeth, will give you a son, and you are to name him John. You will have great joy and gladness, and many will rejoice at his birth,  for he will be great in the eyes of the Lord. He must never touch wine or other alcoholic drinks. He will be filled with the Holy Spirit, even before his birth. And he will turn many Israelites to the Lord their God. He will be a man with the spirit and power of Elijah. He will prepare the people for the coming of the Lord. He will turn the hearts of the fathers to their children, and he will cause those who are rebellious to accept the wisdom of the godly.”

Zechariah said to the angel, “How can I be sure this will happen? I’m an old man now, and my wife is also well along in years.”

Then the angel said, “I am Gabriel! I stand in the very presence of God. It was he who sent me to bring you this good news! But now, since you didn’t believe what I said, you will be silent and unable to speak until the child is born. For my words will certainly be fulfilled at the proper time.”

Meanwhile, the people were waiting for Zechariah to come out of the sanctuary, wondering why he was taking so long. When he finally did come out, he couldn’t speak to them. Then they realized from his gestures and his silence that he must have seen a vision in the sanctuary.

When Zechariah’s week of service in the Temple was over, he returned home. Soon afterward his wife, Elizabeth, became pregnant and went into seclusion for five months. “How kind the Lord is!” she exclaimed. “He has taken away my disgrace of having no children.”

There had been a time when he and his wife Elizabeth had pleaded with God for a child. But the Almighty One seemed not to hear their prayers. Their friends began having children, little girls and boys, filling their homes with laughter, noisy arguments, and bedtime prayers.

Over time, their friends’ children began having children, and hope for an answer to their prayers faded into history.

We can relate to Zechariah and Elizabeth.

We too have prayers that have grown old.

But God holds our prayers for us even when we no longer have the heart to pray them ourselves.

I remember that by the time I was twenty-five, I had already given up on my dreams. At the time I truly felt that there were some things I could just no longer hope for. I had dreamed of being a Christian singer, songwriter, worship leader, writer, and speaker since I was a teenager. Closed doors, my own insecurities, and the demands of reality shifted me from that dream. By the time I was twenty-five, I was working as a high school English teacher, living a vastly different version of my life than I had originally planned.

Eventually, I quit teaching and entered a year of job searching. During that year, I took a trip with a mentor and told her about my vocational struggle. She asked if I had ever thought about seminary. I laughed and said yes, but I didn’t know what kind of employment that could lead me to—and at the time, I was really desperate for employment. She encouraged me that if this was a way for me, that somehow God would provide.

I still remember the excitement that I felt that day.

I remember saying in my heart to God, “Really? You mean, these dreams might still be possible?”

My friend Taylor King says that our prayers don’t have a shelf life.

We never know what God might do in our lives.

When the angel told Zechariah that he would have a son, his first response was skepticism and outright disbelief. He knew that the frailty of his body and Elizabeth’s age made pregnancy impossible. And yet here was an angel, telling Zechariah that this impossibility was now a certainty.

As the pastor of recovery at my church says, “If there is life, there is hope.”

There is hope for us, even when our prayers have grown old.

The day may come when something that we thought was impossible is actually now happening.

In the meantime, our ultimate hope is not in how our prayers are answered, but in the God who is close enough to hear the pleas of our hearts.

The hope that this God offers us is a hope that cannot die.

It is a hope of life beyond the grave, of suffering turned into irrepressible joy, of deserts becoming gardens, of families being reunited, of a resurrected world full of impossible possibilities, of a place at the family table in the banquet hall of God.

We can live this life, with all of its uncertainties and sorrows, from the place of this eternal hope.

The God of the impossible is here, and in his life, there is always hope.

God of the impossible, please stir within me a fresh wind of hope today.

I Have to Believe by Rita Springer

© Seedbed 2021
The God of the Impossible
MORE STORIES