The God Who Sees Me - Seedbed
close
Menu 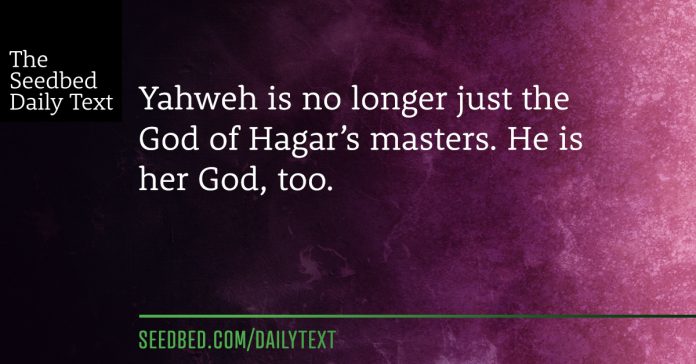 Now Sarai, Abram’s wife, had not been able to bear children for him. But she had an Egyptian servant named Hagar. So Sarai said to Abram, “The Lord has prevented me from having children. Go and sleep with my servant. Perhaps I can have children through her.” And Abram agreed with Sarai’s proposal. So Sarai, Abram’s wife, took Hagar the Egyptian servant and gave her to Abram as a wife. (This happened ten years after Abram had settled in the land of Canaan.)

So Abram had sexual relations with Hagar, and she became pregnant. But when Hagar knew she was pregnant, she began to treat her mistress, Sarai, with contempt. Then Sarai said to Abram, “This is all your fault! I put my servant into your arms, but now that she’s pregnant she treats me with contempt. The Lord will show who’s wrong—you or me!”

Abram replied, “Look, she is your servant, so deal with her as you see fit.” Then Sarai treated Hagar so harshly that she finally ran away.

The angel of the Lord found Hagar beside a spring of water in the wilderness, along the road to Shur. The angel said to her, “Hagar, Sarai’s servant, where have you come from, and where are you going?”

“I’m running away from my mistress, Sarai,” she replied.

The angel of the Lord said to her, “Return to your mistress, and submit to her authority.” Then he added, “I will give you more descendants than you can count.”

And the angel also said, “You are now pregnant and will give birth to a son. You are to name him Ishmael (which means ‘God hears’), for the Lord has heard your cry of distress. This son of yours will be a wild man, as untamed as a wild donkey! He will raise his fist against everyone, and everyone will be against him. Yes, he will live in open hostility against all his relatives.”

Thereafter, Hagar used another name to refer to the Lord, who had spoken to her. She said, “You are the God who sees me.” She also said, “Have I truly seen the One who sees me?” So that well was named Beer-lahai-roi (which means “well of the Living One who sees  me”). It can still be found between Kadesh and Bered.

So Hagar gave Abram a son, and Abram named him Ishmael. Abram was eighty-six years old when Ishmael was born.

As we continue to move closer to the birth of Christ, we enter into our cloud of witnesses and reflect on the lives of some who are gathered there. We begin by returning to the desert where Abraham first encountered God and where he and Sarah wait for their child of promise.

However, we’re not going to focus on this couple’s journey today.

Instead, we turn to a woman who didn’t belong in the story of the chosen ones, and yet ended up meeting God anyway.

Her name is Hagar, which in ancient Hebrew could be translated as “foreign one.”

We join her as she flees into her desert, pregnant with her master’s child.
The wilderness becomes her meeting place with the divine as well.

The Angel of the Lord appears to Hagar in the desert and asks her, “Hagar, Sarai’s servant, where have you come from, and where are you going?”

Hagar is certainly surprised to receive this personal visit from God. Gods don’t typically involve themselves in the fates of servants. And yet this God would eventually become a servant himself.

This God proves, as Walter Brueggemann writes, that “he has not exclusively committed himself to Abraham [and] Sarah.” This God is also “turned toward the outsider.” (p. 152-3)

God has something to say to Hagar in the desert.
The one who has lived her life outside of the promise will now receive one herself.

“I will give you more descendants than you can count.”

Haven’t we heard these words before? Yes, it’s the same promise that was given to Abraham. And yet, here it is, given again—to a woman, to a foreigner, to a slave.

Hagar is overwhelmed by this God who has recognized her need for a promise of her own.
This may be the first blessing she has ever received from anyone.
And it comes from the most powerful Being of all.

From this moment on, everything changes. Yahweh is no longer just the God of Hagar’s masters. He is her God, too. So much so that she calls him by a name that reflects her personal history with him.

This name declares who he has been for her and who he can be for others who also feel forgotten.

Hagar names Yahweh, “The God Who Sees (Me).” This Egyptian slave becomes the first person in the Bible to name God.

Hagar’s story is intricately tied to our Advent journey.
In her encounter with God in the desert, we witness a foretelling of God’s passion for the world.
This is the passion that will compel him to one day descend into his own creation and become one of us, entering Mary’s womb as a little baby, just like Hagar’s unborn child.
We celebrate the culmination of Hagar’s story during the Advent and Christmas seasons:

God coming to earth in the flesh, so that everyone may have a personal encounter with Hagar’s God who sees me.

Beloved, know that you are never far from his presence.
In your wandering he will find you.
My God who sees me also sees you.

God of compassion, thank you for seeing me.
In my wandering, come find me.
I will wait for you.
Spirit of God, breathe upon me.

You Know Me by Steffany Gretzinger, Bethel Music

© Seedbed 2021
The God Who Sees Me
MORE STORIES