The Gospel We Need to Hear - Seedbed
close
Menu 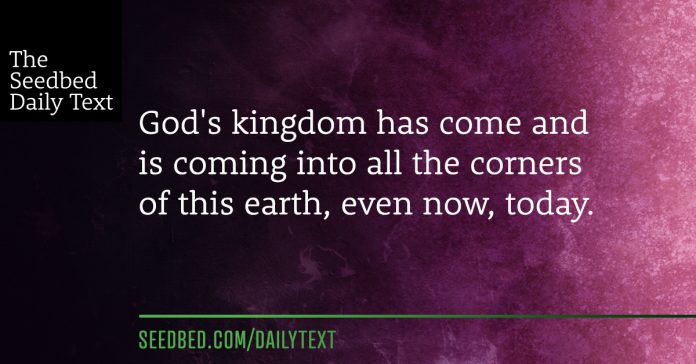 Mary responded,
“Oh, how my soul praises the Lord.
How my spirit rejoices in God my Savior!
For he took notice of his lowly servant girl,
and from now on all generations will call me blessed.
For the Mighty One is holy,
and he has done great things for me.
He shows mercy from generation to generation
to all who fear him.
His mighty arm has done tremendous things!
He has scattered the proud and haughty ones.
He has brought down princes from their thrones
and exalted the humble.
He has filled the hungry with good things
and sent the rich away with empty hands.
He has helped his servant Israel
and remembered to be merciful.
For he made this promise to our ancestors,
to Abraham and his children forever.”

When we think of Mary, a picture of a mother smiling at her newborn child may come to our minds. Or perhaps our thoughts go to a plastic figurine of the young virgin that we display on our mantles or in our front yards. More realistically, we might think of the young girl who believed in a miracle, the child who birthed a king, the woman who became her son’s disciple after he was resurrected from the dead.

Some of these descriptions are truer to life than others, but they all lack a critical part of Mary’s identity that we can easily miss in our nativity plays and Christmas Eve services and holiday carols.

Mary wasn’t just the mother of Jesus. She was also a prophetic herald of the coming kingdom of heaven, a “spokeswoman for God’s redemptive justice,” and a bold preacher of the gospel.

In her famous song, titled the Magnificat, Mary reveals herself to be a fierce, authoritative advocate for the poor. She takes her place in the long line of prophets who call God’s people to repentance for their mistreatment of the vulnerable and who prophesy that a righteous Judge will one day arise to bring justice on the earth.

Mary’s son is that Righteous Judge, and she knows it.

The words of her Magnificat are an outright threat to those who oppress others. Her song of praise is so subversive that it has been outlawed by certain governments throughout history because of its potential to incite people into rebellion against powers that subjugate them.

“The song of Mary is the oldest Advent hymn. It is the most passionate, most vehement, one might also say, most revolutionary Advent hymn ever sung. It is . . . the passionate, powerful, proud, enthusiastic Mary, who speaks here. None of the sweet, sugary, or childish tones that we find so often in our Christmas hymns, but a hard, strong, uncompromising song of bringing down rulers from their thrones and humbling the lords of this world . . .”

In this momentous canticle of justice which still effectively undermines evil in our world today, Mary proclaims, as N. T. Wright says, the “gospel before the gospel” (p. 14). In doing so, she becomes the first to preach the Good News which her son will come to embody and proclaim.

This is the gospel of God’s victory over every evil structure and power in this world. This is the gospel of good news for the poor, of liberation for the captives, of sight for the blind, of freedom for the oppressed, of the lowly lifted high, and the haughty brought low.

This is the gospel that you and I need to hear, over and over again.

We need it to ring in our ears, in our hearts, in our souls.

God does not forget his promises.

He does not leave justice undone.

He will humble the proud and give grace to the humble.

He will remember the lowly and topple oppressive powers to the ground.

His kingdom has come and is coming into all the corners of this earth, even now, today.

You and I are invited to co-labor in this kingdom, to say yes to the work he has given us to do, and to join him in his divine no to all evil attempts to steal, kill, and destroy.

Wherever there is grief, wherever there is wrong, wherever we still groan to see God’s kingdom reign in fullness, Mary’s hymn of solidarity and praise assures us that God will not fail to accomplish his salvation through her son.

Mary’s song is the gospel that we need to hear.

Lord Jesus, may I be open to the gospel that I need to hear today.

Your Peace Will Make Us One by Audrey Assad