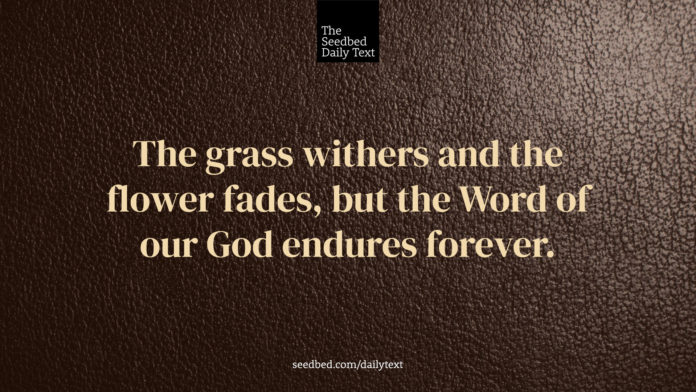 The grass withers and the flower fades, but the Word of our God endures forever.

Some years ago a fascinating incident happened at one of the largest Christian conferences in the country. A well known, young, revolutionary-type preacher was invited as one of a dozen or so keynote speakers. The young man’s participation in the conference generated great anticipation and excitement and undoubtedly accounted for enhanced ticket sales. The moment came for him to give his talk. He stepped to the pulpit amid great adulation, and the large crowd fell silent. He told the gathering they were about to hear the greatest sermon ever preached. Then he opened his Bible and turned to Matthew 5. He read the whole chapter. Then he read all of chapter 6 and following that all of chapter 7. Then he closed his Bible and quietly walked off the stage. It took all of eighteen minutes; far less than the standard fare of 45 minute to an hour long conference talks.

You will recognize this text as the Sermon on the Mount—the greatest sermon ever preached—proclaimed by Jesus Messiah, the Son of God himself.

Here’s the interesting thing. Most of the people were quite disappointed, even upset, with the preacher. Though he spoke not one original word, no one there will ever forget what he said. Though he was one of a dozen celebrated speakers, no one remembers any of them or their talks; only his. Though the story has been told now ten thousand times, no one ever quite remembers the name of the conference or anything else about it—only these eighteen minutes of a two thousand year old sermon. Why?

That was the point I was trying to make yesterday:

“The grass withers and the flower fades, but the Word of our God endures forever.” (Isaiah 40:8)

Yes, Lord, I have invested quite heavily in the grass and the flowers and all they represent in this life. I have bought a lot of stock in the things that will only wither and fade. Awaken me afresh to the Word of our God—who alone will endure forever. I am weary of saluting you. I am ready to surrender. In Jesus’ name, Amen.

How about 2022? Are you ready for less withering grass and fading flowers and more of the  forever enduring Word of God? How might we actualize such a priority going forward? I’ll share an idea tomorrow.

I had a chance to sit down with this young preacher a decade ago and talk about that “greatest sermon ever preached” moment. You can see it here.

How I Got My House Back

Formed by the Word, Filled by the Spirit

The Wonderful Way of Immersion in the Word of God