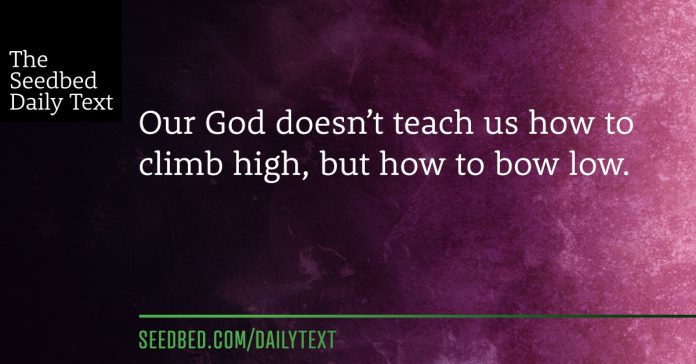 Is there any encouragement from belonging to Christ? Any comfort from his love? Any fellowship together in the Spirit? Are your hearts tender and compassionate? Then make me truly happy by agreeing wholeheartedly with each other, loving one another, and working together with one mind and purpose.

Don’t be selfish; don’t try to impress others. Be humble, thinking of others as better than yourselves. Don’t look out only for your own interests, but take an interest in others, too.

You must have the same attitude that Christ Jesus had.

Though he was God,
he did not think of equality with God
as something to cling to.
Instead, he gave up his divine privileges;
he took the humble position of a slave
and was born as a human being.
When he appeared in human form,
he humbled himself in obedience to God
and died a criminal’s death on a cross.

Therefore, God elevated him to the place of highest honor
and gave him the name above all other names,
that at the name of Jesus every knee should bow,
in heaven and on earth and under the earth,
and every tongue declare that Jesus Christ is Lord,
to the glory of God the Father.

Then they began to argue among themselves about who would be the greatest among them. Jesus told them, “In this world the kings and great men lord it over their people, yet they are called ‘friends of the people.’ But among you it will be different. Those who are the greatest among you should take the lowest rank, and the leader should be like a servant. Who is more important, the one who sits at the table or the one who serves? The one who sits at the table, of course. But not here! For I am among you as one who serves.”

When God comes, the ways of the world and its kingdoms are turned upside down.

Jesus’ followers aren’t exempt from the temptations of the world’s system. After all, we’ve grown up on it. We’ve been taught that bigger is better, that might is right, that there’s always more to yearn for, that it’s best to be first among the rest.

But God in human skin chooses to live according to another way.

This is how the God of all power and might chose to live life on earth: As a poor son of a persecuted nation, as a child refugee, as a homeless wanderer, as a wanted fugitive, as a crucified man.

And what was it all for? It was all for love. For love of his Father and for love of the world.

The pattern of this world is not the way it is to be among us. We don’t follow a leader who lords it over us, who makes sure we know who’s boss, who keeps us around for what we can do for him rather than for who we are.

The Son of God chose not to climb the proverbial ladder of success.

Instead, he descended to a literal grave.

The original Greek in Philippians 2 compares two forms: Jesus was the form of God for eternity before becoming human; descending into humanity, he emptied himself of the form of God and took the form of a human slave. The greatest, most powerful being in the universe came into our world and took the lowest position he could find among us for himself. But he didn’t stop there. He continued his descent into death, dying as a convicted criminal, executed by the most disgraceful means of his time, hanging on a cross.

Our God doesn’t teach us how to climb high, but how to bow low.

Like Jesus’ early followers, we catch ourselves dreaming about how we might become great: in economics, in relationships, in accomplishments, even in spirituality. But when these things become our treasures, we again imitate Jesus’ early disciples, obliviously seeking our own glory while walking beside the suffering servant whose glory is the cross.

So, how do we become great in this upside-down kingdom of God?

Paul gives us our answer in the beginning of Philippians 2. We trade our self-aggrandizement for the humility of Jesus. We ask ourselves how we might lift those around us high. We value love and honor of each other above everything else. We choose to serve when we could have others serve us. We grow so secure in our own identities as the beloved that we don’t need to grasp for anyone else’s esteem.

This kingdom life is a process. It doesn’t happen by our own strength and we don’t enter into it by beating ourselves up when we notice our selfishness or greed. It happens by gazing not at ourselves, but at Jesus. It happens by the power of the Spirit working in us. It happens by allowing ourselves to be loved by God just as we are, right where we are. It happens by trusting that we will be given beautiful gifts by our Father’s own hand in his own time. It comes by valuing his eternal way of love as a greater prize than any fleeting thing we could achieve for ourselves.

The humble way is the Advent way.

It is also the Kingdom way.

Lord Jesus, conform me to the image of your humility.
Spirit of God, breathe upon me.

They’ll Know We are Christians by our Love by Jars of Clay
The Road, the Rocks, and the Weeds by John Mark McMillan
Spotify Playlist for Advent Daily Text