The Lawyers, the Law, and the Law-Giver - Seedbed
close
Menu 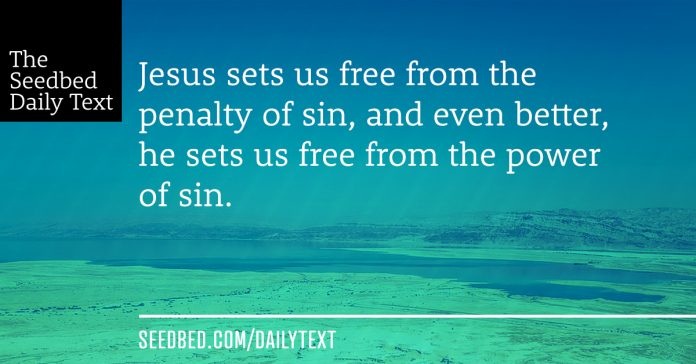 Then they all went home, but Jesus went to the Mount of Olives. At dawn he appeared again in the temple courts, where all the people gathered around him, and he sat down to teach them. The teachers of the law and the Pharisees brought in a woman caught in adultery. They made her stand before the group and said to Jesus, “Teacher, this woman was caught in the act of adultery. In the Law Moses commanded us to stone such women. Now what do you say?” They were using this question as a trap, in order to have a basis for accusing him.

But Jesus bent down and started to write on the ground with his finger. When they kept on questioning him, he straightened up and said to them, “Let any one of you who is without sin be the first to throw a stone at her.” Again he stooped down and wrote on the ground.

At this, those who heard began to go away one at a time, the older ones first, until only Jesus was left, with the woman still standing there. Jesus straightened up and asked her, “Woman, where are they? Has no one condemned you?”

“Then neither do I condemn you,” Jesus declared. “Go now and leave your life of sin.”

The sun is hardly up and the Pharisees are holding court. Let’s try and make sense out of this trial.

For starters, we have the Law. The Pharisees and teachers of the Law come as the prosecutors. They bring a woman, the accused, whom they intend to bring to judgment. Or do they?

“In the Law Moses commanded us to stone such women. Now what do you say?” They were using this question as a trap, in order to have a basis for accusing him.

No, these lawyers cared nothing for this woman; a mere pawn in their chess game. They were going for the Law Giver. Whose side would he take? Would he set the law aside and grant her immunity from prosecution, or would he permit them to throw the book at her? If ever he had a chance to win points with the powerful this was it. Let’s be clear. He gains nothing by taking her case.

In this classic no-win situation, Jesus searches for the third way and chooses to compromise. Are you kidding me? Jesus calls a play no one knew was in the playbook. He turns the lawyers into the accused, puts them on trial, and compels them to testify against themselves.

“Let any one of you who is without sin be the first to throw a stone at her.”

So how can there ever be any sense of justice in this high court? Why not just throw open the prison doors and let them all go free? Isn’t that what the gospel does? The gospel does not do away with justice and judgment, rather it crushes condemnation. Watch this:

Jesus straightened up and asked her, “Woman, where are they? Has no one condemned you?”

“Then neither do I condemn you,” Jesus declared.

There’s guilt and then there’s shame. Guilt can be punished or pardoned. Shame must be crushed—yes, even crucified.

Shaming is our twisted sense of justice whereby we hide from our own unresolved guilt while projecting it onto another person and then condemn them for it. In doing so we heap condemnation on ourselves and the cycle endlessly repeats itself.

Remember, in the garden, Adam and Eve knew they were guilty and rather than abandon themselves to the mercy of God, they covered themselves, hid from God, and prepared their defense. See how it works. Rather than confessing their guilt, they concealed it, and in concealing they condemned themselves, swallowing their shame. Those who have swallowed shame cannot help but to throw it up onto others. A person who feels condemnation will unwittingly do anything to transfer that to someone else.

Now, about the matter of Jesus words to the woman. Everyone likes to make such a big deal of this, noting that Jesus didn’t let her off the hook without a parting stinging rebuke—to show that he was still a hardliner against sin.

“Go now and leave your life of sin.”

Maybe so. Note this. Jesus was not talking to us. He said this to her. No one else was even around to hear it. Our tendency is to take what Jesus said to her and make it our moralistic message to the masses.

I must stand before Jesus, pardon in hand, and hear these merciful words spoken directly to me and no one else but me. I’m the murderer. I’m the adulterer. I’m the thief. I’m the idolater.

Lord Jesus Christ, Son of God, have mercy on me, a sinner. Amen.

1. What do you make of this distinction between guilt and shame and how they work together?

2. Have you given Jesus your shame yet? What are you waiting for?

3. Okay, I can’t resist—what do you think Jesus was writing in the sand?

© Seedbed 2021
The Lawyers, the Law, and the Law-Giver
MORE STORIES