The Mystery of God Entering His Own Creation: Psalm 8 - Seedbed
close
Menu 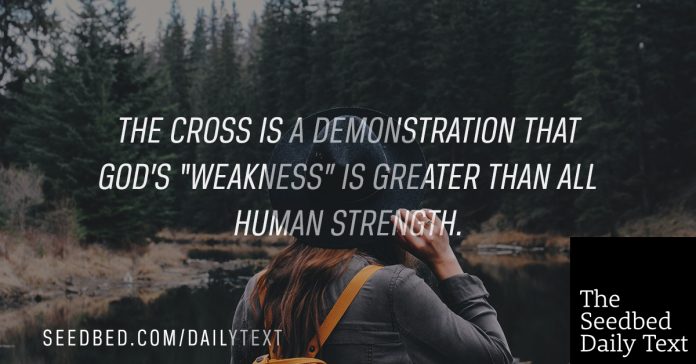 LORD, our Lord,
how majestic is your name in all the earth!

You have set your glory
in the heavens.
Through the praise of children and infants
you have established a stronghold against your enemies,
to silence the foe and the avenger.
When I consider your heavens,
the work of your fingers,
the moon and the stars,
which you have set in place,
what is mankind that you are mindful of them,
human beings that you care for them?

You have made them a little lower than the angels
and crowned them with glory and honor.
You made them rulers over the works of your hands;
you put everything under their feet:
all flocks and herds,
and the animals of the wild,
the birds in the sky,
and the fish in the sea,
all that swim the paths of the seas.

LORD, our Lord,
how majestic is your name in all the earth!

Psalm 8 gives us the proper perspective on life. On the one hand, as bearers of the image of God, we have been exalted above the entire created order. He has “crowned us with glory and honor” (vs. 5) and created us to “rule over the works of our hands” (vs. 6). The whole created order, including flocks and herds, birds of the air and fish of sea have all been placed under our feet. On the other hand, we are part of the created order and nothing compares to His eternal and uncreated majesty and glory. Indeed, “how majestic is your name in all the earth” (vs. 1). Most of our misery occurs when we either fail to recognize His eternal majesty, or we fail to see how the image of God has given us a unique role as stewards over all creation. Some people overreach, thinking that humans are like God. Others under-reach, thinking that we are no different from the animals. One of the ironies in the naturalistic atheists is that they have the capacity to ask eternal questions, but accept the verdict that they are mere animals by denying the very transcendence inherently revealed in the questions they ponder.

The New Testament gives us an even deeper perspective on the psalm when we listen to this act of praise through the lens of Christ. For in the incarnation, God has placed Jesus as the head of the new redeemed humanity. For our perspective, Psalm 8 shows how exalted we are. From the perspective of Christ, Psalm 8 is the story of His condescension into humanity through the incarnation. Although Jesus is the Second Person of the Trinity, co-equal, co-eternal and consubstantial with God the Father, he nevertheless entered into humanity for our sakes. By taking on humanity, Jesus was made “a little lower than the angels” (vs. 5, see also Heb. 2:6-8) and, by that, showed us the full depth of God’s glory, humility and love.

When Jesus entered into humanity, we probably expected him to avenge our enemies through an exertion of God’s power in defeating all those opposed to him. However, in the mystery of the incarnation, he faced His foes not with power, but with vulnerability and humility. When Jesus entered Jerusalem and the Temple for his final passion—death and resurrection, it was not the religious rulers, but the children who sang, “Hosanna to the Son of David.” Jesus noticed this and quoted Psalm 8 to the chief priests and to the teachers of the Law: “Have you never read, ‘from the lips of children and infants you have ordained praise’” (Matthew 21:16). This act foreshadowed the whole cross whereby God’s “weakness” is greater than all human strength.

© Seedbed 2021
The Mystery of God Entering His Own Creation: Psalm 8
MORE STORIES