24 Jesus told them another parable: “The kingdom of heaven is like a man who sowed good seed in his field. 25 But while everyone was sleeping, his enemy came and sowed weeds among the wheat, and went away. 26 When the wheat sprouted and formed heads, then the weeds also appeared.

27 “The owner’s servants came to him and said, ‘Sir, didn’t you sow good seed in your field? Where then did the weeds come from?’

“The servants asked him, ‘Do you want us to go and pull them up?’

29 “‘No,’ he answered, ‘because while you are pulling the weeds, you may uproot the wheat with them. 30 Let both grow together until the harvest. At that time I will tell the harvesters: First collect the weeds and tie them in bundles to be burned; then gather the wheat and bring it into my barn.’”

As you may be aware, I was blessed to grow up around the farm and in a multi-generational farming family. There’s little I treasure more. I learned all kinds of things through doing all kinds of jobs. One of the worst jobs I was ever had was assigned to me by my grandfather (aka “Peepaw”). It was a day in late May, just about the time the weather was heating up. It was days before the wheat harvest would begin.

The year before, they planted a crop called Vetch in several of our wheat fields. Vetch is what is known as a “cover crop.” It is grown primarily as a type of enrichment nutrient for the soil. Vetch is not harvested, rather at a certain point in the growing season the vetch is disced into the ground. Following this, wheat gets planted in the field. There’s a small problem. They are called “volunteers.” Some of the seed from the disced in vetch decides to come up again. It mixes in nicely with the wheat throughout different places across a given field. Because Vetch appears green like the wheat in the early growth stage, it can be difficult to spot it from any distance away. Given it could be distinguished from the wheat it is next to impossible to extract it from the field without also uprooting the wheat around it. So the vetch grows up somewhat indistinguishable right alongside the wheat.

At harvest time, though, the Vetch can be spotted from a mile away. Scattered throughout the midst of the golden brown fully headed wheat are beautiful purple flowering heads rising up to a foot higher than the surrounding crop. At harvest time, the small problem of the volunteer Vetch is a big problem of foreign seed. In other words, if the combine threshes the vetch alongside the wheat it results in the wheat harvest being tainted with the seeds of the Vetch. This leads to virtually every truckload being “docked” a certain percentage per bushel of wheat harvested (or something like that).  Bottom line, because of this foreign seed the farmer’s income is cut.

Back to the dirty job. On the eve of the wheat harvest my grandfather Peepaw pulled my cousin, Lee, and I aside and handed each of us a pair of scissors. He then instructed us to walk through this 150 acre field and cut the flowering heads of Vetch off at the level of the height of the wheat. Did I mention the dense thickness of the chest high stalks of wheat and how hard they were to even walk through? And did I mention the afternoon sweltering heat? And did I mention just how many and how scattered these Vetch plants were throughout the field? Sure, the job was simple enough—just cut the heads off the stalks of Vetch which could be spotted from a mile away. We lasted about thirty minutes before we sheepishly turned in our scissors.

O.K., I know that’s not exactly bible commentary, but then again, it wasn’t bible commentary when Jesus first told it either. The point, however, is obvious. The Kingdom of God—on Earth as it is in Heaven—is an extraordinarily grace filled place. Yes, there will be judgment, but not before a lifetime of extended mercy.

In the parable of the sower, what turned out to be thorn infested soil in one growing season could become “good soil” in another season. One is not predestined to be bad ground for their whole life. In today’s parable we witness the mercy of God in allowing the coexistence of the wheat with the weeds until the very Judgment itself. All of our pre-judgments of people are not only worthless, they do great damage. We are not the judges. Our assessment of who are the wheat and who are the weeds is of no consequence. And because the wheat and the weeds are virtually indistinguishable from each other in the growing season, this parable also provides a sign of just how wrong we can actually be about people.

One more thing. While the parable might not bear this meaning out, the Gospel clearly does. In the natural state of plants, wheat is wheat and weeds are weeds. Weeds cannot become wheat nor can wheat become weeds. In the glorious Gospel of the Kingdom of God, a weed can become wheat. Conversion is not only possible, it’s the whole point. People can change. Because of the incredible grace of God in Jesus Christ, a person can go from the waste of a weed to the wonder of wheat.

No, fellow gospel farmers, we don’t prejudge people. That’s not our job. Our job is to never, ever, ever give up on them. And isn’t that how the extraordinary King of this extravagant Kingdom deals with us? As long as there is breath in our lungs, he never gives up. 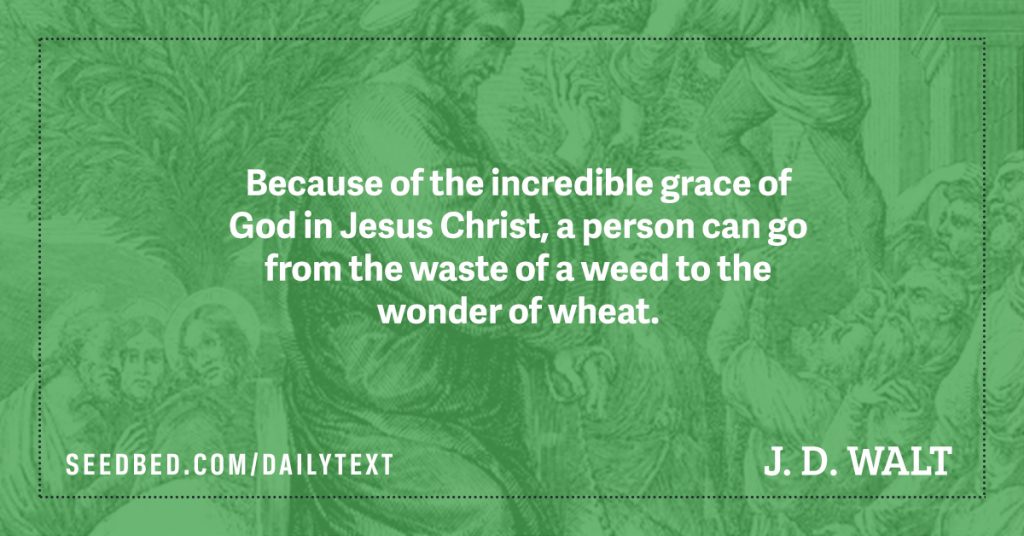 2. Do you have a tendency to judge people for who they are and/or what they have done?

3. How does this parable challenge you? How does it encourage you? It’s one thing to weed your own garden, but quite another to weed someone else’s?