The Reason We Are Blind - Seedbed
close
Menu 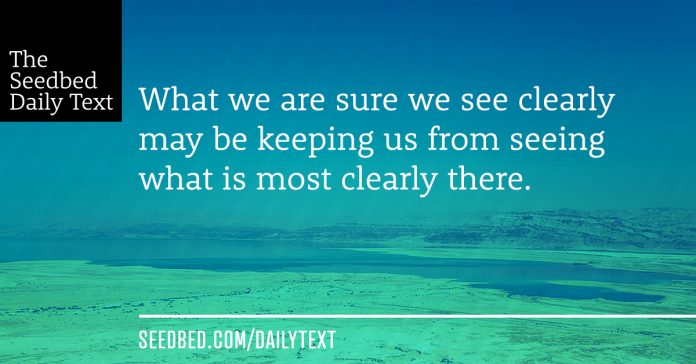 Jesus heard that they had thrown him out, and when he found him, he said, “Do you believe in the Son of Man?”

Jesus said, “You have now seen him; in fact, he is the one speaking with you.”

Then the man said, “Lord, I believe,” and he worshiped him.

Jesus said, “For judgment I have come into this world, so that the blind will see and those who see will become blind.”

Some Pharisees who were with him heard him say this and asked, “What? Are we blind too?”

Jesus said, “If you were blind, you would not be guilty of sin; but now that you claim you can see, your guilt remains.

We have just witnessed the ultimate table-turning moment of the Gospel of John so far. We began with a man born blind. We end with the sons of Abraham and the followers of Moses, the ones who came from the womb seeing God, called out as blind guides.

We began with the assumption that the blind man was the sinner (or his parents). We end with the so-called righteous ones being called out out as the guilty sinners. The irony is so thick that it approaches satire.

If I could draw one application from this whole affair it would be this: Don’t make assumptions about people. Everyone assumed the man born blind was blind for some good reason—because either he or his parents were sinners. Everyone assumed the religious leaders were not sinners but righteous ones because of their standing in the community. Everyone had some kind of assumption about Jesus. Some thought he was demon-possessed. Others thought he was a prophet. Still others were assured he was a sinner. After all, “Can anything good come from Nazareth?”

Don’t make assumptions? So what is an assumption? An assumption is my hidden assessment of a person or situation raised to the level of established truth. The problem with assumptions is the way we hold these often untested assessments as truth when they may actually be far from the truth. It’s our assumptions that fuel our prejudices. When we make decisions about people based on untested assumptions it’s a short step to the trinity of community killers—gossip, judgment, and condemnation.

Don’t make assumptions. Okay, it’s too late. If you are anything like me, you already have a ton of them. Ask the Holy Spirit to increase your awareness of the assumptions you didn’t even know you had. It’s a mark of maturity and it is the pathway toward love.

In the end, our assumptions are the source of our blindness. What we are sure we see clearly keeps us from seeing what is most clearly there.

Abba Father, we thank you for your Son, Jesus, who shatters our unspoken and untested assumptions and replaces them with humble truth. Increase our awareness of the assumptions we hold about one another and give us grace to question them. We pray in Jesus’ name, amen.

1. So how do you go about surfacing and questioning your assumptions about people and situations?

2. How do you understand that assumptions can be dangerous?

3. How can we help one another in grace-filled ways to surface and test our assumptions?