The Seduction of the Crowd

19 While Pilate was sitting on the judge’s seat, his wife sent him this message: “Don’t have anything to do with that innocent man, for I have suffered a great deal today in a dream because of him.”

20 But the chief priests and the elders persuaded the crowd to ask for Barabbas and to have Jesus executed.

21 “Which of the two do you want me to release to you?” asked the governor.

22 “What shall I do, then, with Jesus who is called the Messiah?” Pilate asked.

They all answered, “Crucify him!”

23 “Why? What crime has he committed?” asked Pilate.

Crowds are dangerous. One minute they are cheering you on and the next they are calling for your death. Many of those who shouted “Crucify him!” probably also shouted, “Hosanna to the Son of David!” as he rode in on the donkey just days earlier.

Crowds offer enormous power with no accountability because no-one is personally responsible. Have you ever witnessed what often happens in a court room after a trial by jury—especially a criminal trial. The jury will render their verdict, either guilty or not guilty, and the attorney for the side who lost will immediately ask the judge to “poll the jury.” The judge will then publicly ask each juror, “Is this your verdict?” It’s giving each one a chance to disown the decision in case they were somehow pressured by the group to conform. I wonder what would have happened if we polled the crowd that day.

Still, we love crowds. We make a crowd the measure of almost every organization we are a part of or every event we attend. Churches primarily measure their effectiveness by how large the crowd is on Sunday morning. Why is this when we know it says almost nothing about the effectiveness of the church, other than that they can attract a crowd. For years now we have thought we were a “Christian” nation because of how many churches we had and how many members these churches claimed and how many people went to church on Sundays. We so readily buy into the myth of collective activity when the only measure that matters is personal responsibility.

So how do we measure personal responsibility? Looking back across the span of Matthew, Jesus seems to ever press on the issue of personal responsibility. It wasn’t, “Who do people say that I am,” that mattered to him. It was, “Who do you say that I am?” It wasn’t, “Someone is going to betray me.” It was, “One of you is going to betray me.” It wasn’t, “I’m looking for volunteers to keep watch with me.” No, it was, “Peter, James and John, stay awake and keep watch with me.”

How do we measure personal responsibility? I think we measure it at the smallest level of our real connectedness to one another as disciples of Jesus. Are we being responsible at the level of micro-community—to two or three other people?

Jesus didn’t come to gather a crowd. He came to establish a completely new kind of community. He shows us power is not found in collective activity but personal responsibility, that growing strong is more important than growing large and that the secret to becoming large is actually growing small.

Think of it like a fishing net. A net is made up of thousands of small squares held together by tens of thousands of tight knots. Jesus’ disciples left their nets behind. They had no idea that together they would become the net. That’s the genius of Jesus. In a world of crowds loosely connected by collective ties, Jesus wove a net of a few people knotted together by the love of God. It is still catching fish today.

Disciples aren’t made by or in crowds. They are best made by small, tightly knit micro-communities who covenant to personal responsibility to each other.

I didn’t start today’s writing thinking I would end up here, but I have written myself into something of an invitation. Over the past few years I have found people all over the world beginning to band together and read the Daily Text in small communities. As a response, we have built an online platform to help this happen even more fruitfully. I would like for you to check it out and consider it.

Father, I don’t want to live out my life tossed to and fro by whatever crowd I happen to find myself in. I want to be a real follower of yours. I don’t want to settle for the collective activity that is “Hosanna!” one day and “Crucify him!” the next. Lead me out of the crowd and into authentic community. For the sake of your Kingdom. In Jesus name, Amen. 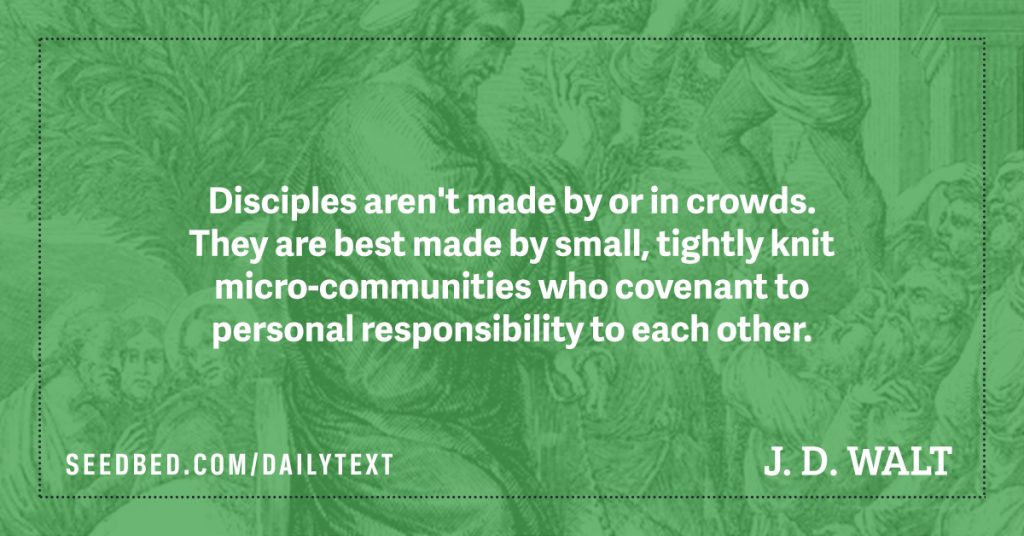 2. Why are we content to measure effectiveness or success buy the size of a crowd?

3. What would be a more true metric of measurement in the Kingdom of God?

The Seduction of the Crowd