The Testimony of Creation and the Word: Psalm 93 - Seedbed
close
Menu 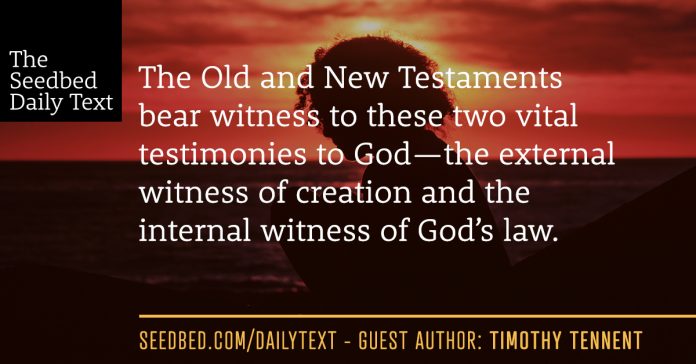 The opening lines of Psalm 93 set the tone for the whole psalm: “The Lord reigns, he is robed in majesty; the Lord is robed in majesty and is armed with strength” (v. 1). The psalm extols his everlasting throne and, indeed, all of creation joins in the celebration of his sovereign greatness. However, the particular majesty of this psalm is found in the way it highlights two doctrines as a testimony to the truth of the opening declaration of God’s strength and majesty, holiness and presence. The psalmist highlights the doctrines of creation and revelation into a powerful twofold witness unto God and his divine, majestic character.

The psalm begins with the created order. “The world is firmly established; it cannot be moved” (v. 1). The psalm extols the power and majesty of creation, especially the thunderous pounding of the seas. Later in the psalm, the subject turns to the second great doctrine, the doctrine of revelation; God’s word and law. “Your statues stand firm” (v. 5) declares the psalmist. Both doctrines bear witness to God’s holiness and character: “Your throne was established long ago; you are from all eternity” (v. 2). “Holiness adorns your house for endless days” (v. 5).

The point of the psalmist is to help the worshipper see that just as the creation is steadfast and unmovable, and the law of God surely came down from Mount Sinai, so God’s existence, character, and majesty are undeniable. These two testimonies are among us: creation and revelation.

Paul elaborates on the two witnesses of Psalm 93 in the early chapters of Romans. He shows that God has not left himself without a witness. He begins with creation, saying that “since the creation of the world God’s invisible qualities—his eternal power and divine nature—have been clearly seen . . . so that men are without excuse” (Rom. 1:20). Then, in Romans 2, Paul argues that both Jew and Gentiles have God’s law. The Jew has the law in visible form through the Ten Commandments and the glorious revelation from Mount Sinai. The Gentiles have God’s law “written on their hearts” through the gentle voice of conscience, which accuses or defends our actions (Rom. 2:15).

What a remarkable thing that both Old and New Testaments bear witness to these two vital testimonies to God, which span the whole history of humanity: the external witness of creation and the internal witness of God’s law.

© Seedbed 2021
The Testimony of Creation and the Word: Psalm 93
MORE STORIES