The Waiting Ones - Seedbed
close
Menu 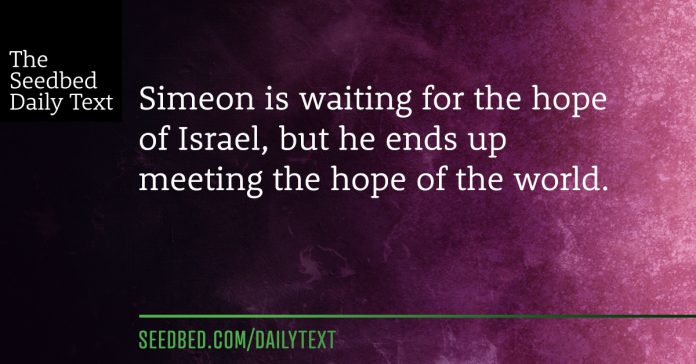 Eight days later, when the baby was circumcised, he was named Jesus, the name given him by the angel even before he was conceived. Then it was time for their purification offering, as required by the law of Moses after the birth of a child; so his parents took him to Jerusalem to present him to the Lord. The law of the Lord says, “If a woman’s first child is a boy, he must be dedicated to the Lord.” So they offered the sacrifice required in the law of the Lord—“either a pair of turtledoves or two young pigeons.”

At that time there was a man in Jerusalem named Simeon. He was righteous and devout and was eagerly waiting for the Messiah to come and rescue Israel. The Holy Spirit was upon him and had revealed to him that he would not die until he had seen the Lord’s Messiah. That day the Spirit led him to the Temple. So when Mary and Joseph came to present the baby Jesus to the Lord as the law required, Simeon was there. He took the child in his arms and praised God, saying,

“Sovereign Lord, now let your servant die in peace,
as you have promised.
I have seen your salvation,
which you have prepared for all people.
He is a light to reveal God to the nations,
and he is the glory of your people Israel!”

Jesus’ parents were amazed at what was being said about him. Then Simeon blessed them, and he said to Mary, the baby’s mother, “This child is destined to cause many in Israel to fall, and many others to rise. He has been sent as a sign from God, but many will oppose him. As a result, the deepest thoughts of many hearts will be revealed. And a sword will pierce your very soul.”

Anna, a prophet, was also there in the Temple. She was the daughter of Phanuel from the tribe of Asher, and she was very old. Her husband died when they had been married only seven years. Then she lived as a widow to the age of eighty-four. She never left the Temple but stayed there day and night, worshiping God with fasting and prayer. She came along just as Simeon was talking with Mary and Joseph, and she began praising God. She talked about the child to everyone who had been waiting expectantly for God to rescue Jerusalem.

God comes to the waiting ones.

Those who wait on the Lord renew their strength; they mount on wings like eagles, they will never be put to shame.

The Lord will always hear the cries of his waiting ones.

In today’s text we look at the stories of two faithful waiting ones. Simeon and Anna are both waiting for the Messiah who is promised to come and rescue Israel. Some translations say that Simeon is waiting for the “comfort” of his nation.

I can imagine Israel as a grieving woman, wailing over the loss of her freedom and heritage, anguished in concern over her children’s futures. Simeon and Anna choose to bear the weight of Israel’s grief, carrying within their bodies the prayers of their people for redemption and hope.

However, when Simeon meets the answer to his prayers face-to-face, the Spirit expands his vision from a hope merely for his own people to a confident hope for the entire world. The child Simeon sees will reveal God to the nations; he will be a light to the Gentiles too. He will save those who are both near and far, he will reveal himself to both Sarah and Hagar’s children, his beacon of hope will shine for everyone. Simeon is waiting for the hope of Israel, but he ends up meeting the hope of the world.

Jesus, the one whose very name means “salvation,” is the hope for everyone. Anna is also waiting in the temple for the hope of God’s salvation. She has lived in the temple for decades after her husband’s death, spending her days in worship, fasting, and prayer. One day, at eighty-four years old, she sees the baby in Mary’s arms and instantly finds herself praising God; the one she has been waiting for has finally come! She has lived her life in God’s presence, but now in her old age she has received the honor of witnessing the fulfillment of God’s promise to her people.

God doesn’t forget the widow who lives her life in worship. He comes for her and meets her face-to-face.

God doesn’t forget the man who waits for Israel’s salvation. He leads him to just the right place on just the right day to see the light of the world.

The one who remembered them won’t forget us, either. We want to see Jesus too.

We want to recognize his appearing here, in the intricacies of our lives. We want to see where the Spirit will take us, where we will just happen to be at just the right time because the whispers of God led us there. We want to recognize the daily glories that are prepared for us, the salvation that lights up our lives, the God who is here with us and is also coming for us again.

We can wait, as Henri Nouwen writes, because we “have received a promise that [allows us] to wait.” (p. 30)

When he was preparing for the cross, Jesus comforted his disciples, saying:

The one who came to Anna and Simeon so long ago also promises to come to you and me.

The face that they saw we too will see.

God will always come for his waiting ones.

Let us wait in expectation for the Lord’s appearing.

God, may I recognize your presence with me today while I wait.

Hope for Everyone, by Matt Maher

© Seedbed 2021
The Waiting Ones
MORE STORIES