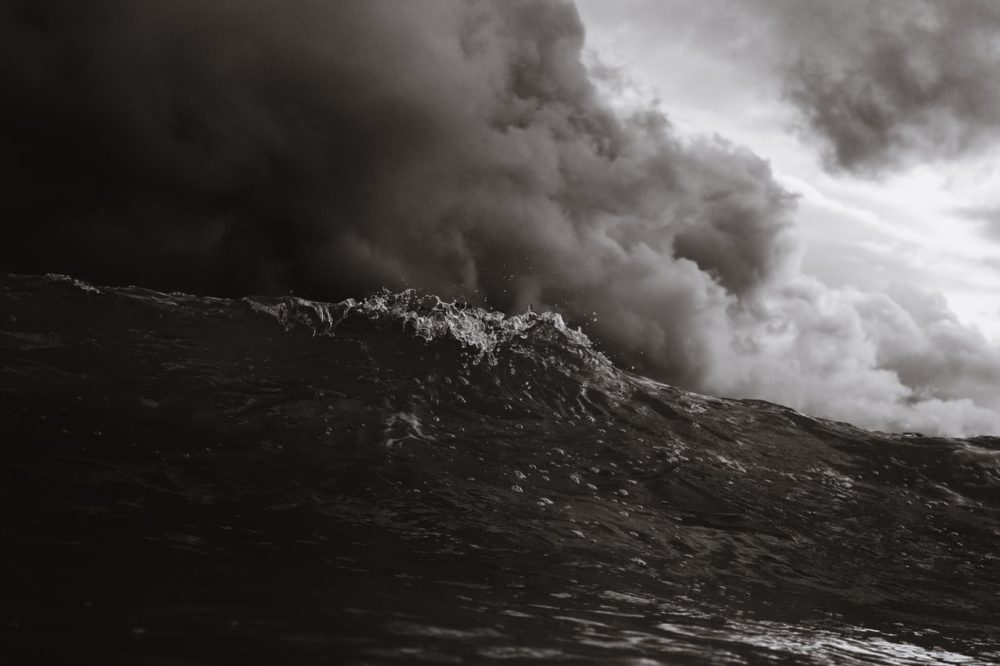 In triune love, God doesn’t create beauty in order to hoard it for himself. He doesn’t order chaos to create a sterile, controlled environment void of liveliness or laughter. He orders creation so that he can fill it and share it—­so that life will bubble and ebb and flow and fidget its way through the days of life that will come, evening and morning, the next day and the next and the next. Witnessing God’s first acts as Cosmic Chef at the counter of creation may help us see it all from his perspective, or as much as that is possible, peeking over God’s shoulder as he mixes and measures, folds and kneads chaos into creation, anticipating the day when we will enjoy all that he has made.

How does God begin the universe? He simply utters, “Let there be light,” and the universe is flooded with it. The awesome power of God’s words, his gift of speaking to create, will only amaze us more as the steps of creation unfold. Words fall from God’s lips, and worlds come into being. From chaos to cosmos, just like that. God doesn’t break a sweat. He orders up worlds with words like we’d order up a latte—­with better results. I could say, “Let there be almond milk,” and it could still go wrong. God says, “Let there be everything,” and it is so.

With God’s words, darkness and light are now separate, distinct states. And here’s something worth holding on to, a hopeful handle for everyone who will ever feel dark or danger, depression or deep distress; here’s where it becomes utterly clear that darkness is not of God. It is separate from him. God is separate from the darkness, but he’s also present in it. He’s not frightened of it, not afraid to walk right up to it and command it. Darkness—­which will haunt humankind in many forms—­is simply an ingredient to God. Something to be shaped and formed for the greater recipe to come. This is a message passed forward in time for when we will wonder if rough waters will prevail: Take heart. God is not confounded by chaos. He is in the chaos with us!

The lights now on, God turns to the formless void. This is the tohu vavohu. The vague, primordial chaos. A black hole of wild and waste. The nothing that comes before the something that will be our everything.

Commanding the formless void, God begins to form order from chaos. Calling forth order means separating. Day by day, God separates out one thing from the next, distinguishing them from each other.

Separating is a part of ordering anything. To conquer my unruly desk, I begin by separating papers into piles. We organize piles of laundry into piles of lights and darks. We put away groceries in categories—­cans here, snacks here, refrigerated things here. Without separating and distinguishing, our lives are easily buried, soiled, and spoiled.

With the act of separating, God also creates time. Separating one day from the next with the words “there was evening, and there was morning—­the first day” gives the days both boundaries and identities, but it also connects them, ties them together as a series of days that will be both distinct and connected. Boundaries determine where one ends and another begins.

Separating and sorting is good news, for God doesn’t create an indistinct soup of beings whose edges are so blurred they cannot be distinguished one from another. All of us have known someone who forgot where their business ended and ours began. Take away boundaries and we become controlling and judgmental, or helpless and dependent. God’s gift of separation means that light is not darkness, sky is not sea, land is not water. But it also gives the gift of meeting and mingling. It’s at the margins where the dance begins, as waves crash onto land and sunrise turns night into day. These differences make life beautiful.

God transformed existence from unruly, chaotic bedlam to welcoming homes structured by cosmic constants ready to be filled—­empty but anticipating what will come. Formlessness and void are ready to be formed and filled. These acts are the antidotes to chaotic emptiness.

Even the way the story unfolds echoes the creation it describes, precise and orderly. The first three days, God forms environments; the next three, he fills them with inhabitants. The two movements, formed and filled, line up side by side as we see God’s blueprints grow.

These carefully ordered environments are filled with teeming life—­inhabitants that run and swim and soar, those who bring unspeakable possibilities and the excitement of stories yet to be written. Formed and filled, God’s earth made God’s way with God’s glorious recipe, all for us to enjoy. Bon appétit.

Sometimes when we tell this story of a good and loving God who gathers and separates creation into such order, the flavor comes out wrong. We may begin to hear the story of God speaking chaos into order as a kind of fussy housekeeper, more concerned with keeping things neat in the world he creates than with the lives of those he has placed to dwell there. My mother, who was an elementary school librarian before she retired, used to spend weeks each summer getting her library organized and decorated and ready for the start of the school year. You could hold a ruler to the books, they were lined up so straight at the end of the shelves. Once the room was ready, she would sometimes take a step back to survey her work and say with teasing irony, “The library would stay really nice if we could just keep the kids out.” Couldn’t the same be said of God’s creation?

If God is a persnickety creator who covers all the furniture in plastic and follows behind us, wiping our sticky fingerprints off the walls, then what good is a good world, since we must constantly be on our guard about messing it up all the time? Can a God who delights in order love messy people?

Messy People in an Ordered World

My friend Ryanne is a colorful Christian. Her home is colorful. She often paints a wall or ceiling or the whole front porch on a whim, based on some color that has drawn her fancy. Her family is colorful. Her children’s skin colors are a glorious variety of hues. Her language is sometimes a little colorful. As she stands yelling at her four kids and two dogs (and yardful of chickens, to boot) from her multicolored porch, she sometimes uses words that attract attention and occasional alarm from her aging neighbors. She stands out in her neighborhood, and pretty much everywhere else, which is clearly the way Ryanne likes it.

She especially stands out when she and her kids pull into the church parking lot on Sundays, her ancient station wagon covered in bumper stickers that range from humorous and whimsical to edgy and political, surrounded by all the matching minivans. It can be hard at first to tell who the adult is in this brood. Ryanne is shorter than her oldest and matches him in cropped hair and faded jeans. She looks a little more like a teen headed to detention than a mother of four on her way to worship. Her church attire is a special T-­shirt—­one of her favorites to wear to church has I love Jesus, but I cuss a little printed across the front. “Just because I don’t dress like a church lady doesn’t mean I don’t believe like one,” she laughs.

Does someone whose life seems so messy fit into the orderly picture of God’s good creation?

Honestly, Ryanne has one of the most solid faiths of anyone I’ve ever met. Her house and car might look a little odd, but she and Jesus are tight. He was with her when the child support was late again. When the electricity was about to be turned off. When her middle kid wanted to go live with his dad. When her daily life was as torn and beat-­up as the old carpet on her back porch, where we sat as she told me how Jesus helped her put the pieces back together.

Just because he made her whole again didn’t mean he ironed her personality flat.

One mistake we make is to assume God’s call to order is a sentence to bland uniformity. He didn’t tidy up the vast expanse of creation expecting us to fall marching into line. Looking around at the world he made, we can see that his creativity is unmatched. Whether or not we wear it on our T-­shirts, all of us are a little colorful, made up of stories and opinions pasted over a bit with life and humor and politics that would entertain some and shock others.

But God’s idea of order in this vast universe wasn’t meant to keep the riffraff out, to place plastic covers on the couches, or to send uniform Christian soldiers trooping into churches dressed up and combed up and polished into essentially the same model with a slightly different minivan.

The design of order in creation was never meant to decree uniformity. Creation by separation was never meant to make clubs of those who belong and outcasts of those who don’t. There’s no sign or secret handshake that Christians have to give in order to be truly accepted. The mark of a life lived faithfully with Christ isn’t some outwardly visible thing that shows up in our homes, our dress, or the shape of our family portraits in the church directory. It doesn’t matter if you wear a suit or a faded T-­shirt. Those are only outward appearances, after all, and God looks at the heart. 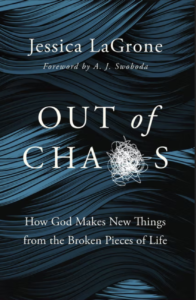 This is an excerpt from Jessica LaGrone’s new book, Out of Chaos: How God Makes New Things from the Broken Pieces of Life.

What if chaos was more than the check engine light of lost causes? What if chaos was the raw material out of which God creates? In the beginning God brought order from chaos, filling the chaos with a beautiful creation, and he’s been doing it ever since. Where you and I may experience confusion and disorder, God sees an opportunity for something new–for a rebirth, a renewal, and a renovation. God did this in the beginning, he did it again at the cross, and with renewed vision for our disordered world today, we look to God to do it again.

Inspired by the powerful picture of creation in Genesis 1:2, author Jessica LaGrone challenges the hope-destroying belief that God has abandoned us in our broken relationships, our pain, and our grief. In the midst of our out-of-control lives, God is there, and he specializes in making new things from the chaos threatens to drown us. When we experience chaos in our own lives and everything feels like it is falling apart, God is just getting started. When the Spirit of God hovers, chaos can give birth to hope.