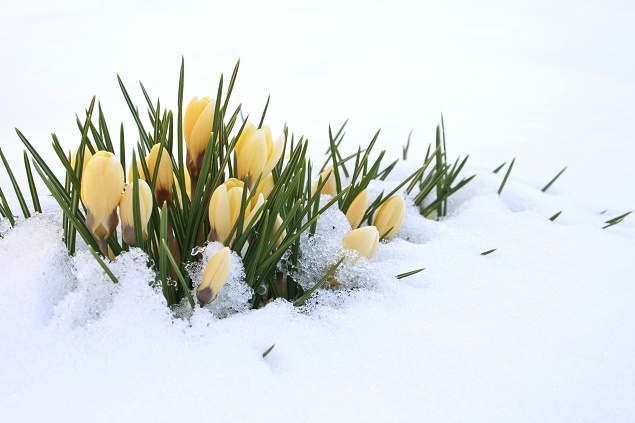 It was a particularly cold morning in late January, and the snow was falling in that uncommitted kind of way, neither ceasing completely, nor sticking to the ground. As I walked hurriedly across campus, trying to get my southern self out of the Kentucky cold, I happened to glance down and see some vibrant green growth pushing its way through the frozen mulch. I couldn’t tell whether it was daffodils, daylilies, or what it was, really. All I knew was that it was a flower of some kind, and it was obviously out of place.

“You crazy little plant! Don’t you know it is still winter?” I reprimanded the greenery out loud for having the audacity to show up in a time and space where the weather had made its message eminently clear: life is not welcome. This little plant was obviously confused as to its proper season, yet, I couldn’t help but smile a little at its tenacity.

I thought about that little plant most of the day. In the days after I first noticed its hardy presence, I began deliberately checking each day to see if it was still stubbornly clinging to its premature declaration of the proximity of spring, despite winter clearly being nowhere near over.

What did that plant mean, loudly proclaiming its presence and its… alive-ness! Everything else had donned the seasonally acceptable greys, dull browns, and shades of white and black. This thing was sticking up from the ground, bolt upright, with the most ostentatious shade of green I had ever seen. It just wasn’t… normal!

Little by little, that silly plant began to endear itself to me. At first, it reminded me of the way an exuberant child will run into a room, completely oblivious to any adult decorum, and unapologetically announce her presence to everyone within earshot. After some time, it began to remind me of myself. As the days passed and bad weather threatened, I began to worry about my little green friend. Would such a tender life be able to survive what was coming?

Then, the dreaded thing happened. It snowed.

Oh, I was absolutely sick about it. I mourned, thinking that little plant was surely frostbitten and dying under that hateful blanket of cold oppression. The weekend was absolutely agonizing as I worried about what had become of those little leaves. When I got back on campus that Monday after the snow had melted, I slowly walked over to the place where I just knew I would find soggy, droopy, half-frozen leaves.

But, what I found was not what I had expected! The plant was still alive!

What in the world could have happened? How could that plant have possibly survived such dreadful conditions?

I remembered something I had learned from living in southern Georgia and riding through Florida’s orange groves. When cold weather was expected, the farmers would spray water on the oranges and let them get an icy coating. The ice acted as an insulator and actually kept the oranges from getting damaged by too-cold temperatures and wind chill. Then, I realized that the very thing I thought should have killed the plant was placed there by God to protect it! The blanket of snow had kept the plant warm enough to survive the colder temperatures and the wind that had been blowing.

If God cared so much for that little plant, then what must He surely feel about me?

The gentle voice of the Holy Spirit reminded me of his Word in Matthew 6:30: “But if God so clothes the grass of the field, which is alive today and tomorrow is thrown into the furnace, will He not much more clothe you? You of little faith!”

I realized there was a reason I felt such a kinship with that little plant. I, too, grabbed hold of life and refused to let go in a time and place where harsh conditions tried to prevent my survival. Every iota of worldly wisdom pointed to my becoming a statistic…to never being able to survive, let alone flourish. Yet, much like this little plant, I tenaciously clung to vibrant life and quite ostentatiously have made my presence known. And the very things that I thought would have killed me were used by God to preserve me and develop me into the unapologetic and spunky person I am. Praise be to God!

I look forward to the true springtime, when I can finally see that flower’s array of colors revealed and see them shouting, “Hosanna to the King!”

Patricia Taylor is the editor for the Soul Care Collective and a member of the Seedbed Farm Team.