What Hitler and Mother Theresa Have in Common - Seedbed
close
Menu 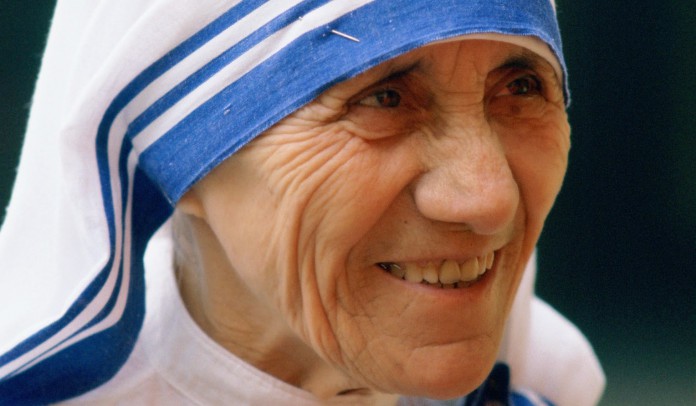 Every time my wife and I go to the movies I end up maniacally laughing through the previews. No matter if they’re advertising a comedy, horror or drama, I can’t help but break out in hysterics.

See, we live in an area dominated by the Malco Theater company, and in Malco’s efforts to dissuade movie-goers from illegally pirating their feature presentations, during their previews, Malco shows us a series of anti-piracy ads that are unintentionally hilarious. If I didn’t have a prior moral compass that kept me from pirating movies, these ads might, in fact, make me want to try.

The ads depict two guys, one with his hood pulled up, both slouched in their chairs like they stole the last cupcake and are hiding from their moms, with evil grimaces on their faces as they hold up a phone to pirate the feature presentation. One of them looks like Emperor Palpatine and the other looks like he might be the baddest bad boy that every moseyed on into a movie theater.

Okay, in all seriousness, illegal piracy isn’t a laughing matter…I think. But every time I see these ads, I can’t stop laughing because these ads completely miss their audience. If they’re wanting to tell average movie-goers like me that it’s wrong to pirate movies, then they should know that if I were going to do so, I would never do it with my hood on my head, angry grimace on my face, slouched in the chair with a fellow conspirator. No, my evil machinations would look much more subtle and everyday-ish than that. I’d dress normally, I’d hold my face in a neutral position, and I’d do it alone so that no one could rat on me before I had my chance to make some serious cash.

When we use illustrations that are beyond the scope, the everyday experience, of our hearers, there’s an higher chance they illustration will miss them altogether. They may even intellectually grasp the message, but they will not feel it, relate to, or see themselves in it.

And this goes for either positive or negative examples.

What Hitler and Mother Theresa have in common is that both of them are so far outside your congregation’s experience that neither of them can really connect on a meaningful, lasting level. This isn’t to say they’re not acceptable as occasional illustrations, but even then, using them as an example ought to be supplemented with plenty of other accessible illustrations and examples to whom your congregation can relate. Mother Theresa is considered too holy, and Hitler is considered too evil.

Another way this problem arises is when preachers, who like to read other preachers, use too many quotes from these other preachers. One of the preaching commentaries I use frequently is written by a pastor named R. Kent Hughes. He does a great job at expositing the text and his commentary is basically his sermon rehashed. As great as it is in many ways, its one fatal flaw is that he likes to quote from and use great, heroic preachers as illustrations. The problem with this is, of course, that it elevates the preachers to this status of supreme holiness and leaves lay people wondering if they can ever reach that high if they don’t become a preacher, and a Spurgeon-like one at that. In other words, while preachers may be fascinated by the lives of other preachers, and while they may serve for good quotes and illustrations at other times, it’s a mistake for us to assume that our audiences find these stories and examples accessible. They may even nod in approval, cognitively understand, and rationally process our example, but will they be able to emotionally and deeply connect? Probably not.

A final way this crops up is when preachers, who are aware of the problem of using illustrations that are disconnected from the audience, decide to use personal illustrations instead. This is, in fact, the route I would recommend. Personal illustrations, when done well, really connect with the audience. But the key word is well. You see, if you tell a lot of personal stories wherein you are always the hero and someone else is always the villain, then you have not only pridefully exalted yourself, but you’ve also communicated to your audience that you are beyond their moral and spiritual reach. Listen to any preacher long enough, listen to him/her tell stories about his/her life, and you can whether s/he is interested in promoting an idealized version of self or promoting the gospel.

I certainly do not think I have the art of the personal story down just yet. But since this is my essay, I’ll share with you my rule of thumb: For every ten personal stories I tell, I can only be the hero of the story one time. I need to be the butt of the joke, the punchline, the idiot, and the sinner nine out of ten times. I don’t need to stand up there and tell about other people’s foibles, I need to be vulnerable and confess mine. And not only does this model a gospel-centered attitude, but it helps people see me as accessible, and it helps them see that if God can work in my everyday life then maybe he can work in theirs, too.

I don’t want to be heckled in my sermons the way I heckle the Malco anti-piracy ads. But I tell you that I’ve undoubtedly used enough sermon illustrations and told enough stories that were so far beyond my audience’s moral and spiritual accessibility range that I probably deserved for the entire audience to laugh hysterically for the entire thirty minutes I preached to them. Luckily, most of my audiences have been more gracious than I am when I’m at the theater.