What If What We Think of as "the Church" Isn't Really THE CHURCH? - Seedbed
close
Menu

15 As evening approached, the disciples came to him and said, “This is a remote place, and it’s already getting late. Send the crowds away, so they can go to the villages and buy themselves some food.”

16 Jesus replied, “They do not need to go away. You give them something to eat.”

17 “We have here only five loaves of bread and two fish,” they answered.

18 “Bring them here to me,” he said. 19 And he directed the people to sit down on the grass. Taking the five loaves and the two fish and looking up to heaven, he gave thanks and broke the loaves. Then he gave them to the disciples, and the disciples gave them to the people. 20 They all ate and were satisfied, and the disciples picked up twelve basketfuls of broken pieces that were left over. 21 The number of those who ate was about five thousand men, besides women and children.

You will remember yesterday we left Jesus in the throes of deep grief over the loss of his cousin, John. He was seeking the solace of solitude where he could draw near to his Father. He had gotten into a boat to try and escape the crowds. No such luck. They followed him in hot pursuit.

So Jesus is mourning his guts out and 20,000 people are literally chasing him. In light of all of this, let’s remember v.14, where we left off yesterday:

When Jesus landed and saw a large crowd, he had compassion on them and healed their sick.

Here’s the interesting part to me. Jesus spent the rest of the day working one-on-one with people, healing them. Let’s be honest: Jesus did not feel like doing this. He was trying to do just the opposite—to escape the crowds and be alone with his Father. At the same time, he didn’t shrug his shoulders, grit his teeth, and power through. How do I know this? The text tells us: he had compassion on them.

I think this feeding of the 20,000 (do the math) is much more about Jesus’ discipling his followers than it is feeding the people. By instructing them to give the crowd something to eat, he exposed the absurdity of their ability to meet the needs of such a large crowd. It was utterly impossible. He was luring them into a scenario where they would witness the unlimited power of God, which is love. Only the disciples knew the extent of the deficit they were facing. Five loaves and two fish to feed 20,000 people is so far past the point of being completely ridiculous. The crowd couldn’t see the miracle; only the disciples witnessed the food being multiplied in Jesus hands.

I think the whole point was to show the disciples (then and now) the possibility of a human life completely entrusted to him. As those five loaves and two fish were to the hungry crowd of 20,000, so were those twelve disciples to the insatiable needs and incurable diseases of the human race. It is absurd to think a small church could care for the needs of a large city. Isn’t that what Jesus was teaching us in the parables of the Kingdom? That the smallest seed becomes the largest tree, capable of housing all the birds of the field? That the tiniest bit of yeast could leaven an inordinately large amount of flour?

Honestly friends, the more I read the New Testament the more I am coming to believe we are not even remotely near the kind of reality Jesus envisions for his church. I don’t mean to be critical but I often wonder if what we call the church is even the Church at all. I think our eyes have for so long been so blinded by the spirit of this age that the church of our experience is only a thin shadow and anemic apparition of the “on earth as it is in heaven” reality we say we believe in. I do not intend any criticism of our leaders and churches. Many would share this concern. I’m just running “the obvious” up the flagpole and seeing what you think.

So what now? We need not despair, and we sure don’t need to be defensive about what we are doing. It’s time to become brutally honest with ourselves and one another about our discontent and dissatisfaction with the status quo. That’s where awakenings start. 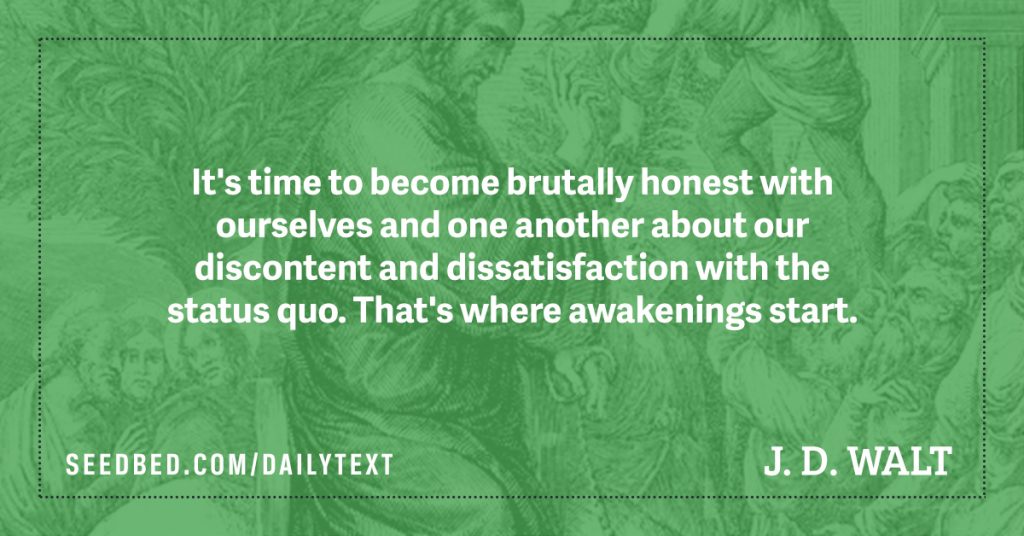 1. What do you think about this contrast I make between Divine Compassion and mere human helpfulness? (Note: I’m not knocking human do-gooding. It’s great, just not the same thing.)

2. Have you experienced divine compassion–what you felt like was a love of another order and magnitude for other people before?

3. Do you share my discontent with the present state of affairs and the contrast between New Testament Christianity and our present experience of it?

© Seedbed 2021
What If What We Think of as "the Church" Isn't Really THE CHURCH?
MORE STORIES