When a Rich Person Gets It Right - Seedbed
close
Menu

62 The next day, the one after Preparation Day, the chief priests and the Pharisees went to Pilate. 63 “Sir,” they said, “we remember that while he was still alive that deceiver said, ‘After three days I will rise again.’ 64 So give the order for the tomb to be made secure until the third day. Otherwise, his disciples may come and steal the body and tell the people that he has been raised from the dead. This last deception will be worse than the first.”

65 “Take a guard,” Pilate answered. “Go, make the tomb as secure as you know how.”66 So they went and made the tomb secure by putting a seal on the stone and posting the guard.

The Chief Priests and the Pharisees are working right through the Sabbath. Even though Jesus is dead, they will give him no rest. It was not enough that they pressured Pilate to execute Jesus, now they want his grave sealed and a detail of armed guards posted outside. The big problem is they were playing Chess with the wrong King. In sealing the tomb they sealed their fate. They might have had half a story if they had just left it alone. They would have at least had the plausibility of the story that Jesus’ body was stolen by his disciples. They unwittingly created another layer of evidence and eye witnesses.

In contrast to this, let’s remember another character in the story. Joseph of Arimathea, we are told, was a rich man who had become a disciple of Jesus. He, too, went to Pilate. He didn’t ask Pilate to do anything for him. He simply requested permission to have the body of Jesus, and it was granted. The Son of God, who in life had nowhere to lay his head, in death had no place to lay his body. The one who created the Earth did not possess a single corner of it in which to be buried.

Once again, with two thousand years between us, it’s easy for us to look upon Joseph with fondness and respect for his dignified act of caring for the body of Jesus. At the time, it would be been a most undignified thing to do. To the watching world, Jesus was a condemned criminal, marked as cursed by his crucifixion. Joseph was a man of high standing in the community. Mark tells us he was a “prominent member of the Council.” (Mark 15:43) What he did was tantamount to taking all his prestige, standing and respect and flushing it down the toilet. Joseph was a seeker of the Kingdom of God, and he had obviously placed some level of hope in Jesus, but those hopes were clearly dashed. This would have been the moment for Joseph and the other “secret” followers of Jesus to cut their losses and move on to the next candidate. Not Joseph. It’s like he bought a powerball lottery ticket the day after the drawing.

Why did he do this? Clearly he was not hoping Jesus would be raised from the dead. Why did he do it? Maybe he was there that day when the other “rich man” came to Jesus to get his eternal life ticket punched—that day Jesus told him to sell all he had and give it to the poor and follow him. Maybe he was there that day Jesus described the end of the world and how the final judgment would hinge on how one cared for the poor and those in need. Maybe somewhere along the way he took Jesus seriously and stopped construction on that bigger barn to house an ever growing retirement fund. Why did Joseph do it? It’s a hard truth but an easy answer: Joseph was a disciple of Jesus.

Joseph shows us what it looks like to be a rich man and a disciple of Jesus at the same time. It looks like throwing away your calculator. It looks like doing things that are not in your self-interest—that you gain nothing from. It looks like not just doing good things in secret, but doing unpopular things in public. Joseph of Arimathea followed Jesus all the way to the Cross and beyond—right into the tomb itself.

All the self-respecting “CYA” disciples of Jesus were conveniently off the grid that Friday. This was not a photo-op holiday to pass out fishes and loaves to hungry multitudes. And of all days, it was not a day for a secret disciple who had held his cards “close to the vest” to show his losing hand.

That’s what it looks like when a rich person gets it right. Joseph of Arimathea, the real deal, a disciple of Jesus. That’s who we are. It’s what we do.

Abba Father, thank you for calling Joseph of Arimathea to the witness stand of the Cross. Thank you for the testimony he laid down for all of eternity to see. Thank you for the costliness of his confession, that it was not a calculated risk, but a wholesale identification with a man who could do nothing for him and yet who would turn out to be his God—risen from the dead, no less. Wow Father! Just wow! You are amazing. In Jesus name, Amen. 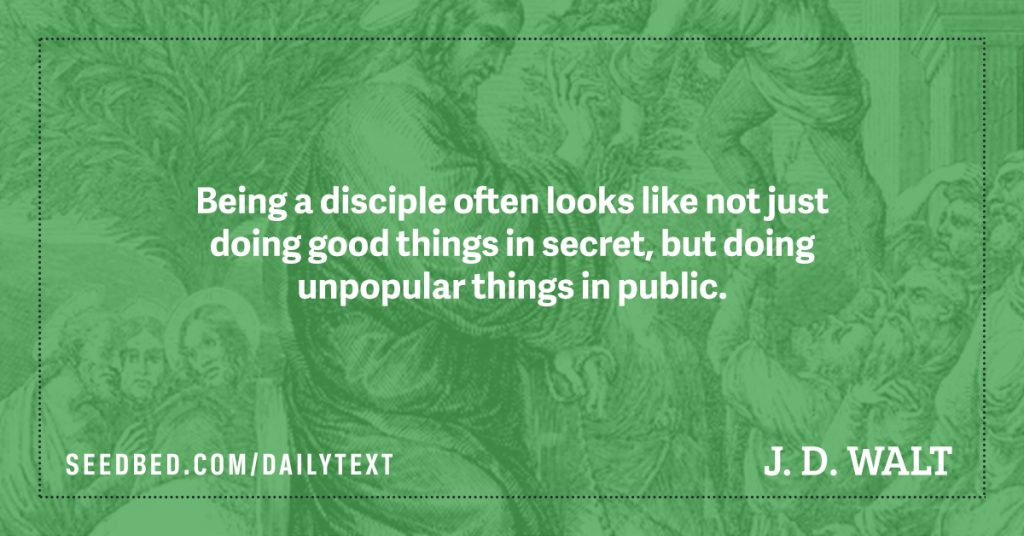 1. What about this situation do you most marvel at today?

2. How does Joseph of Arimathea challenge you? (Because chances are, if you are reading this, you are at least on the lower threshold of who the Bible considers as “rich.”)

3. What would a less self-interested way of discipleship look like for you today? Are you preparing to do the disrespected, unpopular work of the Cross in public? Those days are coming, you know?

© Seedbed 2021
When a Rich Person Gets It Right
MORE STORIES