51 At that moment the curtain of the temple was torn in two from top to bottom. The earth shook, the rocks split 52 and the tombs broke open. The bodies of many holy people who had died were raised to life. 53 They came out of the tombs after Jesus’ resurrection and went into the holy city and appeared to many people.
54 When the centurion and those with him who were guarding Jesus saw the earthquake and all that had happened, they were terrified, and exclaimed, “Surely he was the Son of God!”

We witness a host of profound signs in today’s text. They seem to happen simultaneously,  with one being a hidden sign and the other a public sign. The first is a sign sent directly to the religious elite:

At that moment the curtain of the temple was torn in two from top to bottom.

This would not have been known to the world at large, but only to the Temple insiders. The significance of the sign is hard to dispute. The tearing from top to bottom indicates the judgment from on high rather than the destruction from below (which was to come). The curtain separated the Holy of Holies from everywhere else as the most sacrosanct place on the planet. You’ve probably read about this being a place only entered one day a year (the Day of Atonement) and the stories about them sewing bells into the lining of the priests robe and tying a rope around his waist. In the event of his dying while inside they would hear the bell and pull him out with the rope in order to avoid their own certain death from entering unlawfully.

This tearing of the veil signified the end of the Temple as the dwelling place of God. With the final and atoning sacrifice of Jesus, the Son of God, the presence of God would no longer be hidden behind veils but released into the world.

The second sign is quite public and comes from the other end of the spectrum of the religious elite—the pagan world:

When the centurion and those with him who were guarding Jesus saw the earthquake and all that had happened, they were terrified, and exclaimed, “Surely he was the Son of God!”

Here we see a confession as clear as Peter’s coming from the lips of a Centurion. The men who had crucified Jesus as a convicted criminal now confessed his identity as the Christ of God. In a very real way, the Holy of Holies had left the building and set up shop at the foot of the Cross. Those who were far off had been brought near. Wow! The Chief Priests were out and the Centurion was in. It is impossible to overestimate the significance of this reversal. Who could make this up?

Let’s close with a strong word of admonition and commendation to those of us who find ourselves somewhere in between the religious elite and the pagan believers. It’s from Paul’s magisterial sermon to the Hebrews. I want you to note how it brings all of this together into a profound call to action. Dwell in these words. Remember, cover less ground more slowly.

Therefore, brothers and sisters, since we have confidence to enter the Most Holy Place by the blood of Jesus, 20 by a new and living way opened for us through the curtain, that is, his body, 21 and since we have a great priest over the house of God, 22 let us draw near to God with a sincere heart and with the full assurance that faith brings, having our hearts sprinkled to cleanse us from a guilty conscience and having our bodies washed with pure water. 23 Let us hold unswervingly to the hope we profess, for he who promised is faithful. Hebrews 10:19-23

Abba Father, Thank you for making the Cross the new Holy of Holies, the sign of your Son, the mark of his life, death and resurrection and thank you that the Cross reminds us that Jesus is everywhere, all the time. Open the eyes of our hearts to perceive this “new and living way opened for us through the curtain, which is his body.” Grace us to be continually reminded to draw near with confidence. Come Holy Spirit, awaken us from the casualness of our faith and lead us into a new boldness. In Jesus name, Amen. 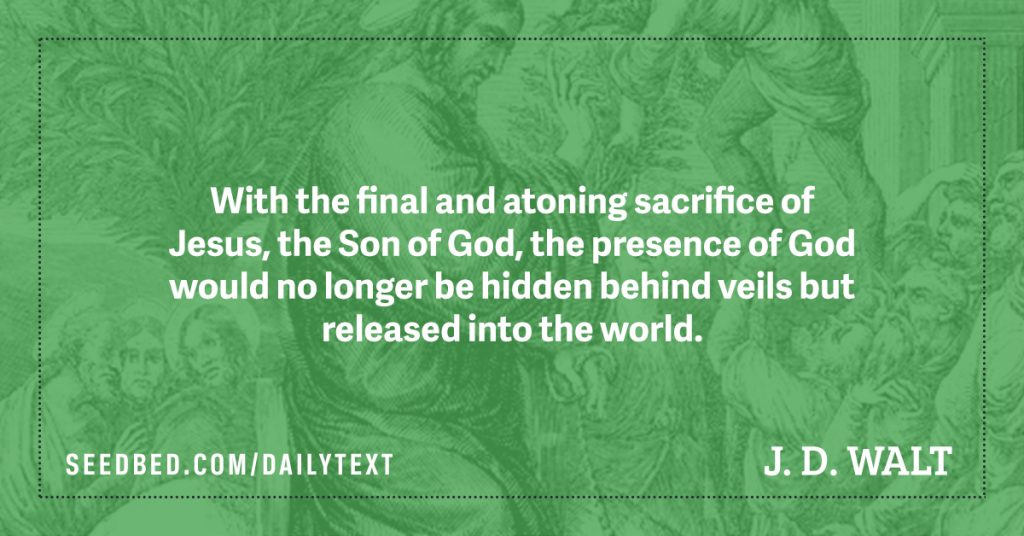 1. Is the metaphorical “campsite” of your life closer to the temples of the religious establishment and elite or closer to the unbelieving centers of pagan life in the world?

2. Would you consider yourself as one who “draws near to God” entering into the Holy of Holies on a regular basis.

3. Has the curtain been torn in your own heart? Or do you have the presence of God locked up in religious practices? How do you relate to the implications of the “blood of Jesus.”