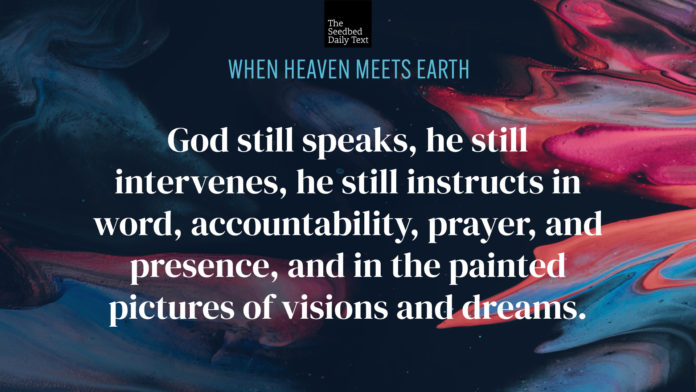 But when he heard that Archelaus was reigning in Judea in place of his father Herod, he was afraid to go there. Having been warned in a dream, he withdrew to the district of Galilee, and he went and lived in a town called Nazareth. So was fulfilled what was said through the prophets, that he would be called a Nazarene.”

In something like a flashback, or a moment of deja vu, Joseph wakes up reliving a previous encounter. With the heavy haziness of morning on his eyes, at the dawn of awaking, Joseph realized he’d met heaven again. An angel appeared to him in a dream and welcomed this holy family’s return. What started with a terrifying escape was finally ending with a hopeful homecoming.

Though Joseph is often the stoic, silent presence in the Christmas story, we should not neglect the very significant reality that he had the privilege of several holy moments in a very short period of time. Four to be exact, and more than anyone else in the story. On four separate occasions, Joseph had been confronted by an angelic presence. Each interaction guiding Joseph’s next steps in an ever complex, and often difficult, circumstance. Four dreams. Four encounters. Four commands. And four acts of willing obedience. (Matthew 1 & 2)

This particular encounter wakes Joseph up with good news; news he must have been eager to hear. Though we know that there were still many moments ahead for Jesus that would demand his struggle and suffering, for now, Joseph, with God’s great intervention, had led Jesus and his family to safety. And as a family, they could begin to focus on healing, and helping this precious child grow in “wisdom, stature, and in favor with God and man.” (Luke 2:52)

But even good news doesn’t come without its trouble. In what was likely a joyful return home, Joseph couldn’t quite let down his guard. When, in the fourth angelic visit, Joseph fears a potential threat and adjusts his plans accordingly.

Even moments of return, celebration, and goodness have great potential for affliction.

Through it all, Joseph, a figure of protection, provision, and care remains vigilant in discernment; discernment he knows is necessary for leading his family to safety. Joseph is discerning and obedient when the threat comes running, and when he’s ready to breathe a sigh of relief. What I want us to hear in Joseph is his constant ear tuned to God’s voice and readiness to respond to God’s leading. (Much like Simeon, but with a bent toward action.)

As angels raised him from slumber again, the Holy Spirit awakened Joseph to the discerning work of confidence in God’s constant leading. Joseph, was an awakened, attuned man of discernment, eagerly participating in God’s leadership and acting on that instruction.

The reality is that God will always speak. He still awakens souls to the work of the Spirit and the reign of God. And as he promised, “Your young men will see visions, your old men will dream dreams.” (Acts 2:17, Joel 2:28) Though the fullness of the Holy Spirit had not yet been poured out on all people, Joseph was experiencing the fulfillment of that prophecy and foreshadowing what would be possible for all of us. God still speaks, he still intervenes, he still instructs in word, accountability, prayer, and presence, and in the painted pictures of visions and dreams.

Since the sudden death of my father, and then our beautiful daughter, I’ve tasted more of God’s presence and goodness in picture, and presence, vision and dreaming, than I ever knew possible. In part, because I’m tuning in to that as a possibility. And, I believe, because in the limited capacity of our grief, the Lord is leaning in to speak more clearly in ways that require less labor and in ways that deeply minister to us. Because God, in his great kindness, knows how to speak to his children in their need. After all, God is begging for our eager, willing participation, not withholding his guidance and presence, but generously offering himself in every moment. Believe it or not, God’s not trying to trick us into guessing his hope for us, actually, he’s doing all in his power to make it abundantly clear.

What may be most important to note, in each of these incredible, holy moments where heaven swoops in on earth, is both the divine coordination and the necessary human effort. Simeon, Anna, Mary, Joseph, and the Magi, intensely pursued God. They sought him with expectation and hope. More than hope actually; with trusted expectancy. And they attended to the devotion, worship, and discipline that would make discernment and obedience possible.

When we want awakening, to taste the beautiful moments of heaven commingling with earth, it won’t just happen as we wait for God to intervene with angels, it will happen as we work to meet God. It will happen as we look for that very thin space where holiness and humanity meet. Our pursuit and obedience, colliding with his presence and promise-keeping . . . that’s where heaven meets earth.

Gracious God, by the power of your Holy Spirit, spark a passionate pursuit in each of us to participate in your already established kingdom; that these “heaven meets earth” moments might be a reality in us. Speak to us again in visions and dreams, and open our eyes to your work all around, as we renew our commitment to pursue you—in devotion, worship, study, sacrifice, obedience, and discernment, that we might share in meetings of heaven and earth, until we worship in the fullness of your kingdom, restored and redeemed.  In Jesus’ name.  Amen.

Do you believe God still speaks in visions and dreams? If not, is it possible God could do that? If so, do you believe he will speak that way for you? Are you waiting for God to drop in with the occasional heavenly moments? Or, are you actively participating with the work the Holy Spirit is already doing? There are visions and dreams at your fingertips, divine presence ever so near, heaven happening all around you. Pursue it.

For more on the promise of God’s ‘already’ kingdom, check out the incredible work of Steve Seamands in The Unseen Real. And for our personal experience of visions and dreams, check out this post where I share the story of our miracle. Though I haven’t yet had the strength to write of our loss, the story of her life, and our own miraculous “heaven meets earth” moment, still takes my breath away. Thank you, so very much for, the privilege of sharing the Daily Text with you. Run after greater awakening every day, and live to awaken others.