When Silence is Not Quiet - Seedbed
close
Menu

55 In that hour Jesus said to the crowd, “Am I leading a rebellion, that you have come out with swords and clubs to capture me? Every day I sat in the temple courts teaching, and you did not arrest me. 56 But this has all taken place that the writings of the prophets might be fulfilled.” Then all the disciples deserted him and fled.

57 Those who had arrested Jesus took him to Caiaphas the high priest, where the teachers of the law and the elders had assembled. 58 But Peter followed him at a distance, right up to the courtyard of the high priest. He entered and sat down with the guards to see the outcome.

59 The chief priests and the whole Sanhedrin were looking for false evidence against Jesus so that they could put him to death. 60 But they did not find any, though many false witnesses came forward.

Finally two came forward 61 and declared, “This fellow said, ‘I am able to destroy the temple of God and rebuild it in three days.’”

62 Then the high priest stood up and said to Jesus, “Are you not going to answer? What is this testimony that these men are bringing against you?” 63 But Jesus remained silent.

I don’t know about you, but when I find myself under attack something instinctively rises up within me to mount a defense. It is a fundamental aspect of human behavior—call it the fight or flight response. We saw it executed to a T when Jesus’ disciples ran for the exits. Jesus chose neither fight nor flight. He could have beckoned twelve legions of angels to defend him in the midst of the garden ambush. (In case you are wondering, that would be somewhere in the neighborhood of 60,000 angels. Picture that scene).

We now find ourselves in the palace of Caiphas, the high priest. These most upstanding men in the land are hosting a kangaroo court and mounting the most unjust case in human history against a completely innocent person. We must fix our eyes on Jesus in this pivotal scene. He neither fights nor flees. But Jesus remained silent.

Sometimes, situations in life present themselves that are so far past the point of ridiculous that to submit to their terms would mean to somehow accept them. Jesus simply does not recognize the authority of this court. His response to them is not a non-response. It is a very calculated response. Silence. To have defended himself would have submitted to their system (which in effect would have defended it). This is a case where silence is far from quiet.

They want Jesus to put up a fight so they can feel justified in their proceedings, like they somehow won fair and square. He does the one thing they weren’t expecting and it confounds them. He showcases the injustice for all time by the divine counterinsurgent strategy of an unquiet silence.

Jesus is entrusting himself to the One who judges justly. His silence signifies his appeal. And he will win, but not before he loses.

WARNING: Some of you reading this are really struggling. It is all too easy for a person who is facing some kind of abuse to read this as saying to just be silent and endure it. WRONG. If this is you, there’s another form of silence to consider: the silence of walking away; or running as the case may warrant. The bigger failure here (beyond the abuser in your life) is the failure of your friends to decisively intervene. I know, it’s rarely that simple, but complexity is no excuse for inactivity.

Sometimes, that’s how it goes in life. We can make a real mess of things when we mount a case against a corrupt prosecution. By waging war we submit to their terms and by submitting to their terms we unwittingly validate their case. As they say back home, “When you wrestle with a hog, everyone gets mud on them.” Something deep inside of us so craves to be justified and validated that we spend most of our lives trying to justify and validate ourselves. We take the bait every time and we wind up in the downward spiral of self righteousness. We play the victim card at every turn until that’s who we have become.

But Jesus remained silent. I’m not suggesting this as some kind of next step for you in your situation. I’m simply asking you to behold this scene; to get this eternal image fixed in your mind’s eye. Listen to the deafening sound of his silence.

Lord Jesus, thank you for this unthinkable moment. Give me the grace to simply behold you in this most deafening silence of all the ages. Save me from a self-righteous application of this unconventional way. I so readily confuse your silence in the face of injustice with the silent treatment in the face of offense. Teach me the ways beneath your ways that I might become more like you. In your name I pray. Amen. 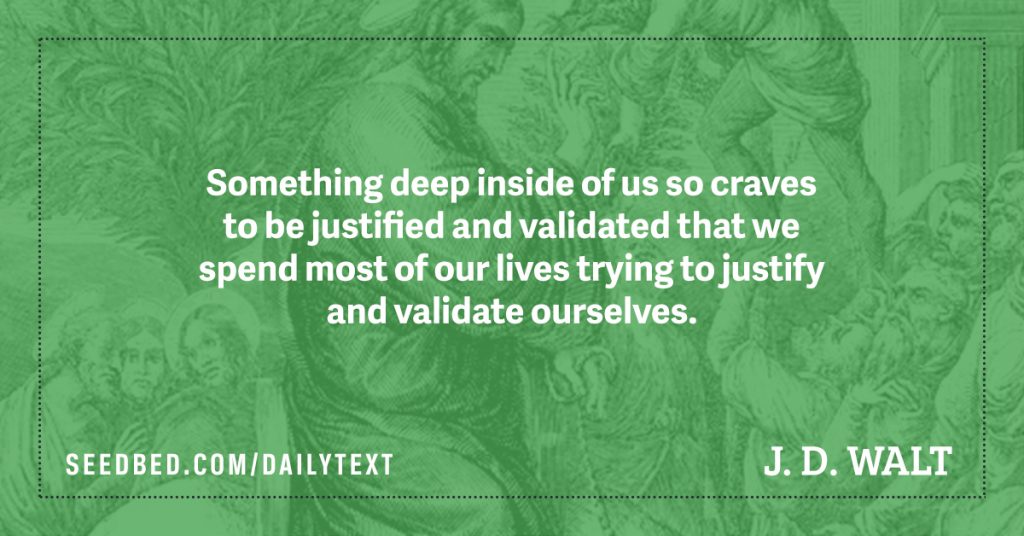 1. Would you consider yourself a defensive person? Do you have a need to be right most of the time?

2. Why do we spend so much energy trying to justify or validate ourselves or our position? What is it about me that makes me so susceptible to doing this?

3. Keep pressing rewind on the DVR of your mind and watching this scene over and over. You aren’t trying to extract some kind of truth or application from it. You are simply beholding the Son of God. What effect is that having on you?