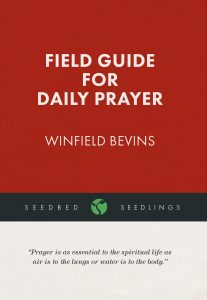 Get the Field Guide to Daily Prayer from our store (bulk copies available).

For most of my adult life, I have struggled to pray. This wasn’t always the case. When I was a young confirmand and still in the process of adopting my baptismal faith for myself, I prayed often, mostly about the things going on in my life or the questions I had. When I was in high school and my church attendance was done more out of custom than devotion, my prayer life remained vital. When I was in college and began to intentionally read scripture, though somewhat haphazardly, my prayers gave me insight in the process. Surprisingly, it was not until I began my theological studies at seminary that my prayer life started to decline.

This decline was less noticeable than one might imagine. I was studying and eventually teaching theology and scripture in a professional capacity. My love and commitment for reading scripture and the writings of church tradition never waned and I continued to find much meaning in my participation in the local church and deep theological discussions with my wife, my students, and my friends. These practices overshadowed the growing infrequency with which I actually prayed. In the admittedly few moments when I was honest with myself about this, I attributed it to my lack of faithfulness. In those times, I would recommit myself to prayer but my efforts were never sustained.

About a year ago, I experienced a rather difficult set of circumstances that required much discernment. As usual, I discussed the situation almost ad nauseam with trusted friends and family members. I asked for their prayers. I journaled about it. I read the scriptures with these issues on my mind and heart. And then finally one day, many weeks removed from the onset of the issue, I decided to pray.

In what was now a somewhat unfamiliar act, I closed my eyes and, almost without thinking, began to recite those familiar platitudes that one hears often in prayers: affirmations that God was in control of the situation, that God would work all things for good, that, in the words of the prophet Jeremiah, God knew the plans he had for me, and the like. And suddenly it dawned on me, I didn’t believe these things anymore.

Hear me clearly, my realization in that prayerful moment was not that I no longer believed in God or God’s providential care for me. Rather, I saw clearly, perhaps for the first time, that my theological education had formed in me an understanding of God that no longer accorded with the platitudes I once prayed.

For example, I believe fully in God’s love and care for me but, as one formed in the Wesleyan tradition, I also believe in the free will of human beings to act in ways that work against the will of God. This means that divine providence is more nuanced and mysterious than a simple affirmation that God ordains everything that happens just as it happens. Thus, while it is true that God works all things for good, the ways of that working are hidden and more often than not will be different from the “good” for which I am praying. And if the plans God has for me are anything like the plans he had for Israel, to whom Jeremiah’s well known prophecy was originally addressed, then I might find myself in exile before realizing them.

In that prayerful moment, the reason for my long struggle with prayer became clear: my theology had gotten in the way. This sobering realization began in me a sustained effort to recover prayer as a practice and a discipline. While the process is ongoing, and cannot as yet be counted a success, I have gained through it several insights.

First, I have come to see that my difficulties with praying reflect not an incompatibility of deep theological knowledge and the practice of prayer but rather my impoverished vision of the nature and purpose of prayer. At some point in my life, I had reduced prayer to supplication, praying for God’s provisions and care in areas of need. But prayer is so much more. Indeed, to read the great prayers of the saints, or the Lord’s Prayer for that matter, supplication is but a small segment of a much greater and more robust worshipful communion with the Triune God. Prayer involves extolling the attributes of God. Prayer entails rehearsing the acts of God in scripture, through history, and in one’s own life. Prayer is confession. Prayer is expressions of joy and thankfulness for all God has done and is doing. Prayer is lament. Prayer is awed, purposeful silence at the divine mystery that is beyond words. When the more comprehensive nature of prayer is understood, theological learning becomes indispensable for the practice because it brings a deeper understanding to the character of God that one is praising and the works of God that one is remembering.

Second, whether we admit it or not, our prayers reflect our beliefs. This is the essence of the ancient dictum known in Latin as lex orandi, lex credendi. the law of prayer is the law of belief. Put differently, prayer proceeds belief. Early Christians did not develop a system of beliefs and then begin to pray to a God that was consistent with those beliefs. Rather, they prayed and worshipped the God that they encountered through Jesus Christ and only subsequently reflected upon what this kind of prayer meant. Thus, even though it took several centuries to articulate, for example, a developed Trinitarian understanding of God, early Christians worshipped the Son as God alongside God the Father from the beginning of the Church. If we take this insight to our current practice of prayer, the words we use to pray express the deepest beliefs we already hold about God. Therefore, if I am consistently praying something that is out of sync with what I claim to believe about God, chances are good that I hold this belief in my mind only. It has not yet reached my heart.

Finally, prayer takes practice. When I began to pray again after so long an absence from the practice, I slipped into my former ways of praying because they were habitual. I had not trained myself to pray in ways consistent with my beliefs and this lack of training opened the door for old habits of praying to return. In establishing new ways of prayer that better reflect my theology, I have found the practice of reading the Psalms, the prayers of the saints, and the prayers of the Book of Common Prayer to be quite helpful. Even as I begin to pray with my own words again, this practice of reading traditional prayers will remain a vital part of my discipline as it is a profoundly Christian practice, analogous to reading the traditional vows at one’s wedding. The prayers conform my thoughts and words to those of the Church, uniting me to the God of the Church’s ancient confession.

Prayer is an essential discipline in the life of discipleship. Unfortunately, like so many practices of the Christian life, it is not natural and does not come easily. Perhaps the first step, then, is saying a simple prayer expressing the desire to pray. “Lord, teach us to pray,” the disciples once said to Jesus. So, too, must we.