When There Is No Application - Seedbed
close
Menu

27 Then the governor’s soldiers took Jesus into the Praetorium and gathered the whole company of soldiers around him. 28 They stripped him and put a scarlet robe on him,29 and then twisted together a crown of thorns and set it on his head. They put a staff in his right hand. Then they knelt in front of him and mocked him. “Hail, king of the Jews!” they said. 30 They spit on him, and took the staff and struck him on the head again and again. 31 After they had mocked him, they took off the robe and put his own clothes on him. Then they led him away to crucify him.

Can you see Jesus? He is surrounded by a small army of the most feared and cruel men in the world—a company of Roman Soldiers. They are stripping off his clothes. Can you see the Son of God standing there naked, covered only by shame. Suddenly one of the soldiers has an idea. He somehow finds a red robe and put it on him. Another savage joins in, twisting several branches of thorns together into a makeshift crown, smashing the thorns on top of his head, deep into his flesh. Then another one of the heartless brutes grabs a staff and put it in his right hand.

Then they knelt in front of him and mocked him. “Hail, king of the Jews!” they said.

Next they grabbed the staff from his hand and took turns beating him with it. They repeatedly hit him on the head. They hit him in the face, probably knocking his teeth out. Others gathered close around him and took turns spitting in his face, yelling demeaning and degrading insults. Finally, after his eyes are swollen shut and his face beaten bloody they strip off the red robe and put his own clothes back on him.

This is pure, merciless unadulterated cruelty—the very worst of humanity unleashed on the very best. And it would not stop.

Then they led him away to crucify him.

There are no points to be made here, no clever observations or obvious insights to point out. There are no trite life applications to be found. This is our God. We cannot allow ourselves to look away. We must behold him.

Father, how could this have happened? How did it happen? Open our eyes to see and our ears to hear. Open our hearts to grieve. How could this be? Save us from cheap, trite expressions of gratitude. Instead help us sit in the grief of it all. Help us experience the loss of it all. Just help us behold it all without looking away. In Jesus name, Amen. 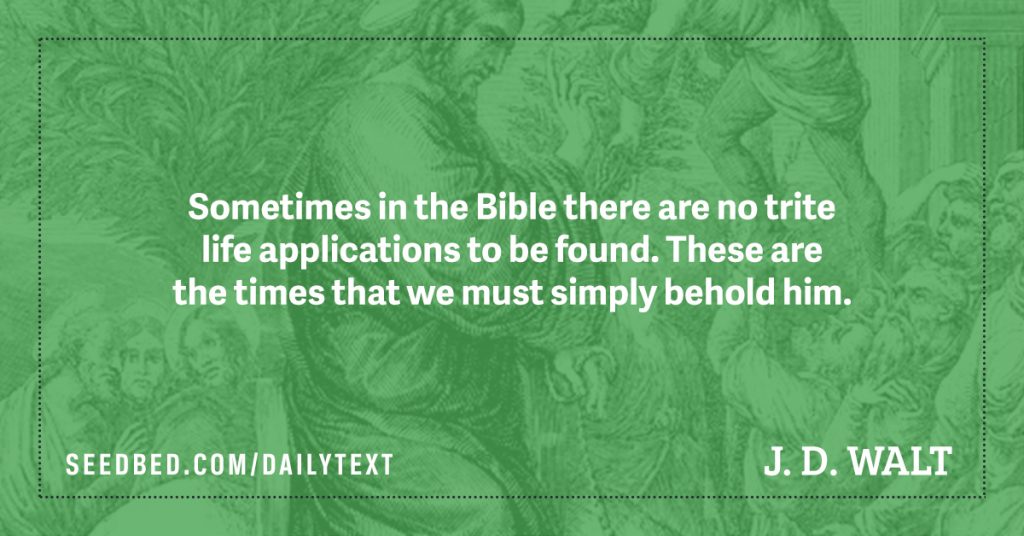