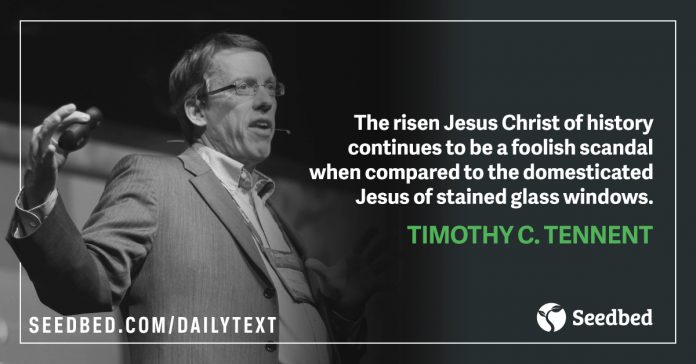 The next day as they were leaving Bethany, Jesus was hungry. Seeing in the distance a fig tree in leaf, he went to find out if it had any fruit. When he reached it, he found nothing but leaves, because it was not the season for figs. Then he said to the tree, “May no one ever eat fruit from you again.” And his disciples heard him say it.

On reaching Jerusalem, Jesus entered the temple courts and began driving out those who were buying and selling there. He overturned the tables of the money changers and the benches of those selling doves, and would not allow anyone to carry merchandise through the temple courts. And as he taught them, he said, “Is it not written: ‘My house will be called a house of prayer for all nations’? But you have made it ‘a den of robbers.’”

The chief priests and the teachers of the law heard this and began looking for a way to kill him, for they feared him, because the whole crowd was amazed at his teaching.

When evening came, Jesus and his disciples went out of the city.

In the morning, as they went along, they saw the fig tree withered from the roots. Peter remembered and said to Jesus, “Rabbi, look! The fig tree you cursed has withered!”

“Have faith in God,” Jesus answered. “Truly I tell you, if anyone says to this mountain, ‘Go, throw yourself into the sea,’ and does not doubt in their heart but believes that what they say will happen, it will be done for them. Therefore I tell you, whatever you ask for in prayer, believe that you have received it, and it will be yours. And when you stand praying, if you hold anything against anyone, forgive them, so that your Father in heaven may forgive you your sins.”

In his bestselling book, The Jesus I Never Knew, Philip Yancey chronicles his slow realization that the Jesus he met in Sunday School was not the same Jesus he met in the pages of the New Testament. Yancey recalls a poster of Jesus displayed on the wall of his Sunday school class, which portrayed Jesus serenely standing in a pastoral setting in the midst of children with a small, sleeping lamb in his arms. I vividly remember that very picture of Jesus, as it must have been displayed on the walls of Sunday Schools across the country.

The Jesus portrayed in Sunday school and children’s sermons are often, Yancey comments, “a Mister Rogers before the age of children’s television.” [1] He was kind, gentle, reassuring, other-worldly and, most of all, very, very nice. However, at some point it dawned on him that no government in the world would execute Mister Rogers. It seems that the crucified and Risen Jesus Christ of history continues to be a foolish scandal and a “stumbling block” to those who find their “nice” or “domesticated” or “stained glass” Jesus contradicted by the vulnerability of the crucifixion, the boldness of His claims, or the divisive and prophetic figure portrayed by the actual eye and ear witnesses of His life and ministry, as recorded in the New Testament.

Our text begins with Jesus making his daily trip into Jerusalem. Just outside of Bethany, as he was making his way into the city, Jesus saw at a distance a fig tree in full leaf. Mark 11:12 says that Jesus was hungry, so he walked over to the fig tree to see if there was any fruit on the tree. But, when he got there, he found nothing but leaves! Interestingly, Mark records that it was not the season for figs. Jesus cursed the fig tree and said, “may no one ever eat fruit from you again!” The disciples heard him say this. Jesus enters into the city, enters the Temple and begins to drive out those who were buying and selling. He overturned the tables of the money changers—an act of judgement against religious enterprising.

The next morning, Jesus gets up and again makes the trip into Jerusalem. But on the way out of Bethany, the disciples see the Fig Tree which Jesus had cursed the day before. It was withered from the roots up, dead and lifeless. This is the same tree which a day earlier had been in full leaf—a tree that was 15-25 feet tall! The disciples are amazed. Peter says to Jesus, “Rabbi, look the fig tree you cursed has withered.” They realize that it is a miracle—a prophetic act by Jesus that means something. This is like a parable which is lived out.

If you read the Old Testament, you will be struck by how many times the fig tree is mentioned. It is mentioned over 40 times in Scripture and becomes a kind of symbol for Israel. It is adopted by the prophets as a kind of national tree in the way that, perhaps, the bald eagle represents the USA. The Old Testament uses the fig tree as a symbol or metaphor for Israel. He is picturing Israel under judgement.

The cursing of the fig tree becomes a highly significant prophetic action. In Palestine, the fig trees show their leaves in March, and by April, they are in full foliage. They don’t bear ripened figs until June—six weeks after the time Jesus sees this tree—which is why Mark points out that it was not the season for figs. But, like all fruit trees, the forerunner of a fully ripened fruit is a knob of some kind and, in the case of fig trees, it was already edible (what we would call a “green fig”). The poor often ate these little knobs, and they can actually be considered tasty. But like with any fruit tree, if the forerunner of the fruit is absent, it means that the tree is barren. If by April, the tree does not have anything, it is not going to bear fruit six weeks later.

However, this tree did not give the appearance of a dead, barren tree, it was in full foliage. Jesus fully expected to see a fruitful tree. When he approached it and saw that it was barren, despite having the appearance of fruitfulness due to the full foliage, it was an irresistible parable waiting to be lived out. To be barren is one thing, but to have the appearance, the outward show of fruitfulness and, upon close examination, no fruit, outward impressiveness and inner barrenness, creates an apt opportunity to make a powerful statement about Israel. This lived-out parable raises the powerful question: Is your life bearing spiritual fruit or just a lot of leaves? Are we merely giving the appearance of godliness, or are we truly bearing fruit for the Master? The “beef” of the Christian faith is found in our fruit, not merely our outward confession.

1. Once we strip away all of our outward religious acts, are we truly bearing fruit for the kingdom of God?

2. What are the signs of true spiritual fruitfulness in our lives?