Why Down Is the New Up - Seedbed
close
Menu 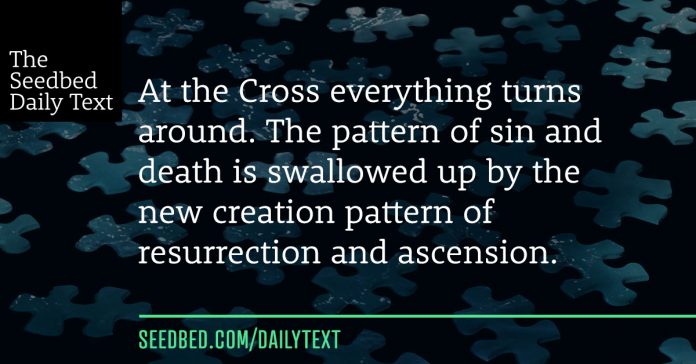 7 But each of us was given grace according to the measure of Christ’s gift. 8 Therefore it is said,

“When he ascended on high he made captivity itself a captive;
he gave gifts to his people.”

9 (When it says, “He ascended,” what does it mean but that he had also descended into the lower parts of the earth? 10 He who descended is the same one who ascended far above all the heavens, so that he might fill all things.)

Remember the clarion call from Romans 12:2 where Paul says, “Do not conform any longer to the pattern of this world but be transformed by the renewing of your mind.”

Today’s text reveals one of the fundamental patterns unfolded in all of Scripture; which is in fact revealed throughout. It is the pattern of descending and ascending. The pattern of the world we see from Genesis 3 onward gets this backwards. It begins with Adam and Eve, who though given everything, chose to grasp for equality with God. This pattern took root in Cain whose jealous quest for superiority over his brother led him to murder. The pattern establishes itself in stone, if you will, as the Babylonians make bricks to build a tower that reaches to the Heavens in order to make a great name for themselves. Following each of these instances of prideful ascension we witness humiliating descent in the form of great falls.

Isn’t it just like God to reverse this pattern by coming to us in the greatest and most humble descent ever imagined? In his letter to the Philippians, which we have traveled together, he literally breaks into song at this point about Jesus, “who being in very nature God, did not consider equality with God something to be grasped, but made himself nothing, and taking on the nature of a slave, being made in human likeness and found in the appearance of a man, he humbled himself and became obedient to death, even death on a cross.”

At Babel our speech was confused, creation devolved back into chaos, and a proud people were scattered into oblivion. Now watch this brilliant move of ascension:

“Therefore God highly exalted him and gave him the name above all names, that at the name of Jesus, every knee should bow, in Heaven and Earth and under the Earth, and every tongue confess that Jesus Christ is Lord, to the glory of God the Father.”

At the Cross everything turns around. The pattern of sin and death is swallowed up by the new creation pattern of resurrection and ascension. All of our striving to make a name for ourselves is met with Jesus being given the name above all names. All our confusion and chaos and division is healed at the Cross, not by some new world order with uniform speech but with every nation, tribe and tongue confessing with one voice “that Jesus Christ is Lord,” to the glory of God the Father.

Bringing it full circle. To “have the same mind in us that was in Christ Jesus looks like “not conforming to the pattern of the world but being transformed by the renewing of our mind.”

The most critical thing to remember here is this: the pattern is the person. There is no pattern of the Cross apart from the person of Jesus. It’s why we follow him.

We will get to gifts and giving tomorrow.

Abba Father, we thank you for your Son, Jesus, who shows us the way by becoming the Way. I want the mind of Christ. I want to walk in the pattern of the Cross. Teach me this movement of descent and ascent. And I know I will not find it without some others around me. So bring me into this kind of community. We pray in Jesus name, amen.

1. Are you seeing the pattern? How is it challenging you?
2. Where is conformity to the patterns of this world strongest in you at this point in your life? Hint—it’s probably a blind spot for you, so you might need to ask someone to help you see it. ;0)
3. Where is the growing edge of the mind of Christ in you at this point in your life? Hint- it probably has to do with the hardest thing you are facing right now or your greatest point of pain and suffering.

© Seedbed 2021
Why Down Is the New Up
MORE STORIES