Why Jesus Was Not Crying for Lazarus - Seedbed
close
Menu 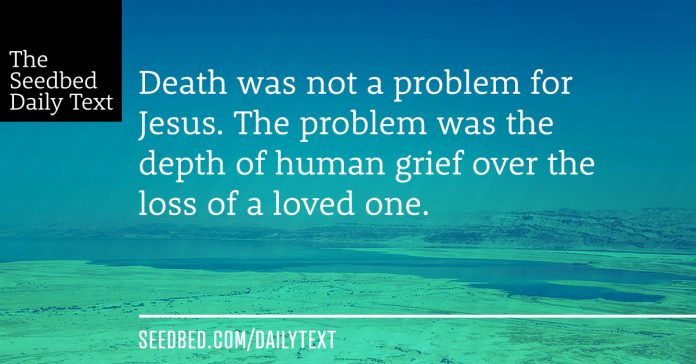 After she had said this, she went back and called her sister Mary aside. “The Teacher is here,” she said, “and is asking for you.” When Mary heard this, she got up quickly and went to him. Now Jesus had not yet entered the village, but was still at the place where Martha had met him. When the Jews who had been with Mary in the house, comforting her, noticed how quickly she got up and went out, they followed her, supposing she was going to the tomb to mourn there.

When Mary reached the place where Jesus was and saw him, she fell at his feet and said, “Lord, if you had been here, my brother would not have died.”

When Jesus saw her weeping, and the Jews who had come along with her also weeping, he was deeply moved in spirit and troubled. “Where have you laid him?” he asked.

“Come and see, Lord,” they replied.

Then the Jews said, “See how he loved him!”

But some of them said, “Could not he who opened the eyes of the blind man have kept this man from dying?”

“There is no death! The stars go down
to rise upon some other shore,
And bright in Heaven’s jeweled crown
They shine forever more.”

Unfortunately, the poet is wrong. Death is real.

Lazarus was as dead as a hammer. Our creeds are careful to tell us that Jesus was “crucified, dead and buried.”

So if Jesus means what he says, that when a person who believes in him suffers death they do not die, why is he crying at Lazarus’s tomb? Read the text carefully on this point.

When Jesus saw her weeping, and the Jews who had come along with her also weeping, he was deeply moved in spirit and troubled.

Jesus wept not because Lazarus died, but because of the bitter pain this loss inflicted on Mary, Martha, and their friends. To be sure, the text informs us that the Jews interpreted Jesus’ tears as an expression of his love for Lazarus. I don’t think Jesus was sad about the death of Lazarus. He was sad about the suffering of Lazarus’s family and friends.

Jesus hated death not so much for the sake of the one who died, but because of the way death devastated those left behind. Jesus knew that through his death and resurrection he would destroy death with life. Death was not a problem for him. The problem was the depth of human grief over the loss of a loved one.

Because of Jesus, those who die believing in him are actually more alive on the other side of death than they were in their lives beforehand. The grief of the survivors is not so easily solved. In fact, it can only be comforted. The deeper we love in life, the greater our loss in the wake of death. This will not change until Jesus returns and wipes away every tear. The gospel truth is that the greater reality has already changed. Death has been defeated.

Abba Father, we thank you for your Son, Jesus, who has defeated death. Thank you that he comforts us in the wake of our losses with the gift of the gospel. Thank you that though we mourn we can dance at funerals. Come, Holy Spirit, strengthen us in these bedrock truths. We pray in Jesus’ name, amen.

1. Why do you think Jesus wept at the tomb of Lazarus?

2. Do you think you protect yourself from loss by not taking the risk of loving others deeply?

3. Are you afraid of death? Do you live in fear over the possible deaths of others?