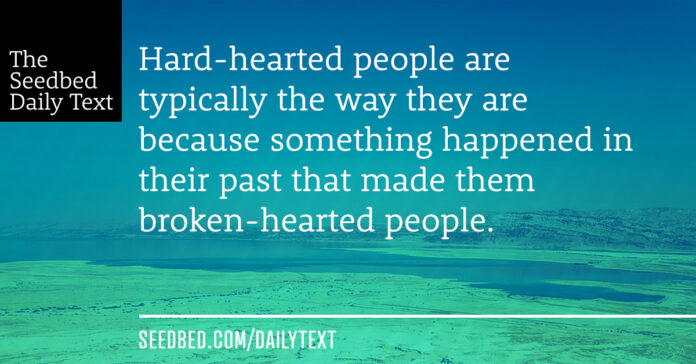 The crowd spoke up, “We have heard from the Law that the Messiah will remain forever, so how can you say, ‘The Son of Man must be lifted up’? Who is this ‘Son of Man’?”

Even after Jesus had performed so many signs in their presence, they still would not believe in him. This was to fulfill the word of Isaiah the prophet:

“Lord, who has believed our message

and to whom has the arm of the Lord been revealed?”

For this reason they could not believe, because, as Isaiah says elsewhere:

“He has blinded their eyes

and hardened their hearts,

so they can neither see with their eyes,

nor understand with their hearts,

nor turn—and I would heal them.”

Isaiah said this because he saw Jesus’ glory and spoke about him.

Hard-hearted people are typically the way they are because something has happened somewhere in their past that made them brokenhearted people. They risked vulnerability or trust or relationship and they were hurt, betrayed, or rejected. In such circumstances, in an effort to protect themselves from such pain again, people tend to vow to themselves they will never let anything happen again. In many cases, bitterness will take root and eventually hardness will begin to set in. They become invulnerable, untrusting, and isolated (even if they seem to remain relational people). Unbelief does not so much come from a willful choice to not believe but from a broken heart that has become hardened. Signs and wonders can have surprisingly little effect on such people.

Such people are often described as jaded or cynical. Their way of hearing and seeing people and life in general gets distorted. It is a self-fulfilling, self-perpetuating reality. Hard-hearted people have an insatiable need to be right and are often perceived as self-righteous. And let’s be clear: hard-hearted people are not bad people; they are broken people. The problem is this condition of hard-heartedness is impervious to healing. Unfortunately, the various ways and means they deploy to protect themselves from pain also shields them from healing. Walling others out has the unfortunate side effect of walling ourselves in.

“so they can neither see with their eyes,
nor understand with their hearts,
nor turn—and I would heal them.”

How does a hard-hearted person escape this condition? They get out of it in the same way they got into it—a broken heart. Just as the unhealed broken heart became hardened, so the hardened heart must become broken again in order to be healed. That’s why we use the term “hardened.” A fiercely protected, hardened heart does not easily break. The only hope: love them anyway.

Abba Father, we thank you for your Son, Jesus, who heals the brokenhearted. Give us eyes to see the hidden brokenhearted-ness of those whose hearts have become hardened. We know only your love heals and so make us vessels of this love for others. We pray in Jesus’ name, amen.

2. How do you tend to protect yourself from being hurt by others? Could that have resulted in developing any hardness in your heart?

3. Do you know any people you would consider to be hard-hearted at the present time? What would it look like for you to step up your love for them?