Why Small is the New Big - Seedbed
close
Menu

31 He told them another parable: “The kingdom of heaven is like a mustard seed, which a man took and planted in his field. 32 Though it is the smallest of all seeds, yet when it grows, it is the largest of garden plants and becomes a tree, so that the birds come and perch in its branches.”

33 He told them still another parable: “The kingdom of heaven is like yeast that a woman took and mixed into about sixty pounds of flour until it worked all through the dough.”

34 Jesus spoke all these things to the crowd in parables; he did not say anything to them without using a parable. 35 So was fulfilled what was spoken through the prophet:

“I will open my mouth in parables,
I will utter things hidden since the creation of the world.”

What do mustard seed and yeast have in common?

They are so tiny as to be almost invisible. Despite their practical invisibility, given time, they produce an extraordinarily visible result. When Jesus wants to convey the way the Kingdom of on Earth as it is in Heaven, he starts with a parable about soils. Next he moves to a couple of parables about seeds. While the distinctive “good” soil is critical for the Kingdom to flourish, without the seed the soil is of no consequence.

While I don’t want to over-mix these parables, there is a fascinating interplay between the ideas they unfold. The soil holds the possibility and potential of the Kingdom. The seed holds the power of the Kingdom. The parable of the sower was all about the soils. The parable of the mustard seed is all about the power of the seed.

In another place in the gospel Jesus will say that a person only needs faith the size of a mustard seed in order to see extraordinary outcomes. The issue is not the size of the seed but what’s in the seed. The soil quality is important but the most critical reality is the seed itself.

And about yeast. On this count, flour is flour is flour. The yeast holds the power. In other places in the gospel, yeast gets characterized in a negative way, as in, “the yeast of the Pharisees.” In this case, Jesus gives it a positive spin to denote the hidden, quiet, transformative quality of an almost invisible agent to effect an extraordinary change.

The kingdom of the world favors the big and the strong and the apparently powerful. The kingdom of God is precisely the opposite. In the end only one kingdom will remain. I like how Brother Paul puts it: 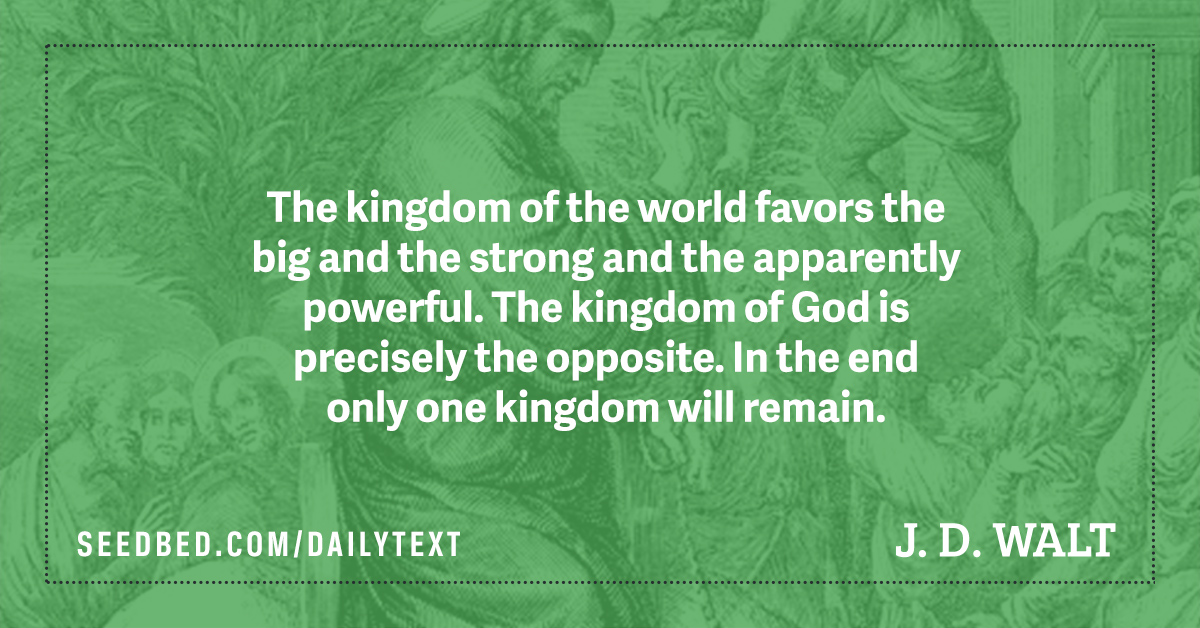 1. Ponder Jesus as the ultimate example of his own illustration. He was the single mustard seed who today has 2 billion followers worldwide. Thoughts?

2. What would it take for you to shift your way of seeing and understanding in ways that would cause your value system to change?