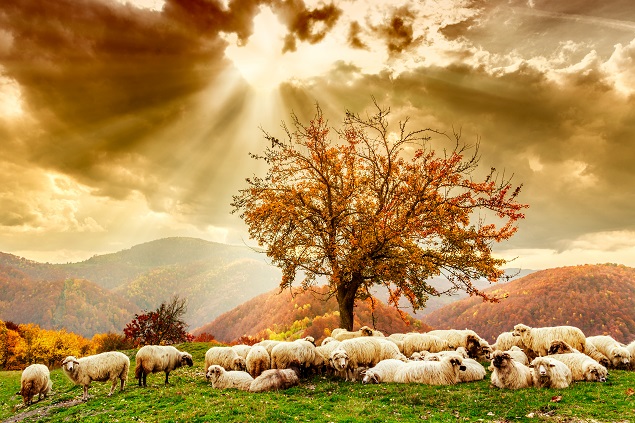 Have you ever wondered… Why the Shepherds? The Savior of all humankind had come into the world! Why did God send His angels to proclaim this eternity-transforming news to the shepherds first?

Why not announce it first to the religious leaders? Why not the wealthy, ruling class—those with the most influence? Or why not the news media?! Ok, I don’t think they had news media back then. But why not announce the news to the most talkative, chatty people in the region who could get the word out fast?

The Shepherds who worked in the fields around Bethlehem were not ordinary shepherds. These were not simple field hands. The small village of Bethlehem and its surrounding pasturelands lay just south of the city of Jerusalem, the capital city of Ancient Israel. The city centers of Bethlehem and Jerusalem are only about 7km apart—a little over 4 miles.

Ancient Israel had a sacrificial system of atonement. That means that they were restored to right-standing with God through the death of an animal. The Book of Leviticus lays out the entire system for sacrifices that God required of the people of Israel:

And what was the purpose of all this? Why is this complicated system of sacrifices being required of Israel by the Lord? It was to deal with the people’s sins. If you sin, you kill an animal. You sin again, you kill another animal. You commit a really big sin? You kill another animal. You sin by accident? You kill an animal. This long, complicated system of sacrifices prescribed in Leviticus was all about atoning for people’s sins, whether they be intentional sins of disobedience, or even from accidental or unintentional things that may have caused them to become unclean in the sight of God.

But even this intricate & detailed system for atonement was woefully inadequate: every form of sacrifice was only temporary. Each of the sacrifices only restored the person’s atonement until the very next time they committed sin! The atoning effect of the previous sacrifice would be gone, and they would have to offer a new sacrifice to once again restore their holiness in the eyes of God.

Leviticus gives us a detailed description of what man could try to do to make himself right with God. It was as if God was saying, “Well, if there could be some human way to be redeemed from sin—just hypothetically speaking, if it were even somehow possible (which it’s not) for mankind to atone for their own sins, then this elaborate, complicated, gruesome, temporary system involving a tremendous amount of death and loss—this inadequate system is the closest you could ever come to achieving your own atonement. And even that would only cover you until your very next sinful thought, or act, or decision, or omission…”

The writer of the Book of Hebrews would later explain the brokenness of this system in Hebrews 10:11: “Day after day, every priest stands and performs his religious duties.  Again and again, he offers the same sacrifices, which can never truly take away our sins.”

This was the system Israel operated in for over 1400 years! And all of this was supposed to take place in Jerusalem. All of the nation’s sins were to be atoned for in the sanctuary of God in Jerusalem. The animals for these sacrifices were raised and cared for and looked after by the shepherds of the pasturelands of the villages surrounding Jerusalem.

In order for the sacrifice to be acceptable, the lamb had to be spotless and without blemish—no broken bones, no sores, or scratches, or physical defects. So the shepherds responsible for these animals had to take very good care of them. Generation after generation after generation of Bethlehem shepherds were specifically trained in the care of the sheep who, one day, would each be taken into Jerusalem to be sacrificed to make atonement for the sins of the people.

So… Why the Shepherds? Why would the first angelic proclamation of “Joy to the World!” come to the Bethlehem shepherds? I wonder who could have had more excitement than these particular shepherds?! Who could have understood the gravity of the proclamation better than them?!

The angels announced: “Peace on earth!” From heaven’s point-of-view, there is “Goodwill toward men!” You don’t have to offer these insufficient sacrifices anymore! The gulf that stands between God and humanity is removed—through this child! This baby demonstrates that God’s favor truly rests upon mankind! His spotless and unblemished life will be the sacrifice that fully and finally unites men with God!

Nick Cash is a regular contributor to Soul Care Collective.