22 Immediately Jesus made the disciples get into the boat and go on ahead of him to the other side, while he dismissed the crowd. 23 After he had dismissed them, he went up on a mountainside by himself to pray. Later that night, he was there alone, 24 and the boat was already a considerable distance from land, buffeted by the waves because the wind was against it.

27 But Jesus immediately said to them: “Take courage! It is I. Don’t be afraid.”

Then Peter got down out of the boat, walked on the water and came toward Jesus. 30 But when he saw the wind, he was afraid and, beginning to sink, cried out, “Lord, save me!”

31 Immediately Jesus reached out his hand and caught him. “You of little faith,” he said, “why did you doubt?”

32 And when they climbed into the boat, the wind died down. 33 Then those who were in the boat worshiped him, saying, “Truly you are the Son of God.”

NOTE TO READERS– This one is longer than I wanted it to be. I think it’s important so please bear with me.

Walking on water. . . it may be the most sensational miracle of all. Who doesn’t want to walk on water? That’s the reason I think he did it. Jesus performed no throw-away miracles. He was no show-off. All of these works held immense significance as signs. They all pointed beyond themselves to a greater reality. In fact, they are still pointing.

Let me be clear though, I don’t think Jesus walked on water in order to teach us how to walk on water. As I observe Jesus, he is constantly trying to help his disciples hear, see and perceive the unseen reality and realm of the Kingdom of Heaven. He was showing them that the normal laws of nature do not govern the realm of the Kingdom. Just like the feeding of the multitudes, walking on water is a violation of the laws of nature.

In the Kingdom of Heaven, the Holy Spirit is the coin of the realm, figuratively speaking. As a result, in the realm of the Kingdom, nothing is impossible. There is a completely different set of norms and rules in the Kingdom of “on-earth-as-it-is-in-heaven.” Remember the message Jesus sent back to John upon being questioned as to whether he was the coming One?

The blind receive sight, the lame walk, those who have leprosy are cleansed, the deaf hear, the dead are raised, and the good news is proclaimed to the poor. Matthew 11:5.

The Kingdom of Heaven is not a place where human beings show up for church every Sunday and do their best to live good lives. No, the Kingdom of Heaven is a Divine dimension of reality where human beings are empowered to participate in the ministry of Jesus through the power of the Holy Spirit. The good news– aka the Gospel: this reality is always immediately possible and open to us.

So how have we missed it? Good question. Permit me a helpful but over-generalized explanation. For the past few hundred years we in the West have slipped under the governance of the Enlightenment, which largely posited a Deistic worldview devoid of the possibility of any intervening supernatural activity that could not ultimately be proved by science. (Remember Thomas Jefferson’s Bible? Google it).

This led to the well-intended but ill-fated reinterpretation of the Bible in which history became legend, miracles became myths and the New Testament was reduced to an ethical framework. The whole thing can be broadly filed in the filing cabinet labeled, “The Liberal Theological Project.” The project is not only bankrupt but it continues to bankrupt the vision and worldview of many a young preacher and infect millions upon millions of would-be believers.

Now, it is critical to understand this is not a knock on science and the good gifts of the Enlightenment. The problem is the way the Scriptures were made subject to the scientific worldview. In other words, if it didn’t square with science it was considered dubious at best. The opposite and consequent approach was to make science subject to Scripture. In other words, any scientific theory that tended to prove the Earth was older than 5,000 years was thrown out.

The practical outworking of this problem is the way God fearing people try to find some acceptable middle ground to stand on. One such approach is to accept the premise that miracles were limited by God to the age of the Early Church. This is known as dispensationalism. Another approach is to assert that miracles are only limited by the quantity and quality of the faith of the one seeking the miracle. Pentecostalism has at times strayed into these waters through movements like the Word of Faith movement, etc. Various other self help, positive thinking and miracle-as-metaphor oriented approaches have also staked out some of this middle ground.

The big problem is we are thinking along a continuum ranging from Scripture (aka Divine Revelation) to Church tradition to scientific reason and on to the finite and often fortuitous nature of human experience. Alert: one of these things is not like the others. Scripture is not sitting at a roundtable with these other players in some kind of debate in search of consensus. Scripture is in another category entirely. In fact, the great irony is that without Scripture and its revealed material worldview, we would not even have science.

I like the way the communion liturgy puts it, “When the Lord Jesus ascended he promised to be with us always in the power of your Word and Holy Spirit.” We have been given the Word and the Spirit. Tradition, reason and experience (all helpful dimensions of understanding) must take a number and get in line.

Scripture reveals the true, present and ultimate reality of the Kingdom of God, which is all that ever was, is and ever shall be. God created, owns and possesses it all. Many fiefdoms continue to assert squatters rights, but none have eternal deeds. Satan continues to exercise rogue authority but he has been defeated. God has intervened in a full and final way by sending his Son, Jesus, to announce the Gospel and consummate the Kingdom of Heaven on Earth.

We must cease our search for middle ground and commence a fully orbed seeking of the Kingdom in every context of creation, every sector of society and for the sake of every person on the planet. It will not finally come until his final coming, of which no-one knows the date or time.

What we must be fully and ever increasingly awakened to the reality of the now near Kingdom. It is an unseen reality longing to be made visible through the people of God. It is a parallel and even hovering universe of sorts, ever ready to break through the thin veil of the world we see and unveil the fullness of the transformative, life-giving, life-saving, holy love of God.

Meanwhile, back at the ranch, Jesus is walking on water. He’s trying to show us something far deeper than the depth of the water. He is revealing to us the unseen realm of the Kingdom of Heaven where nothing is impossible for those willing to wake up, take the risk, buy the field, purchase the pearl and seek after Jesus for all he’s worth.

The agenda of the Holy Spirit is not about improving the quality of life for us middle and upper class Americans. The Holy Spirit’s agenda is to awaken us to such a gloriously beautiful and arresting ambition that we will gladly give the rest of our waking days to serving it with joy. 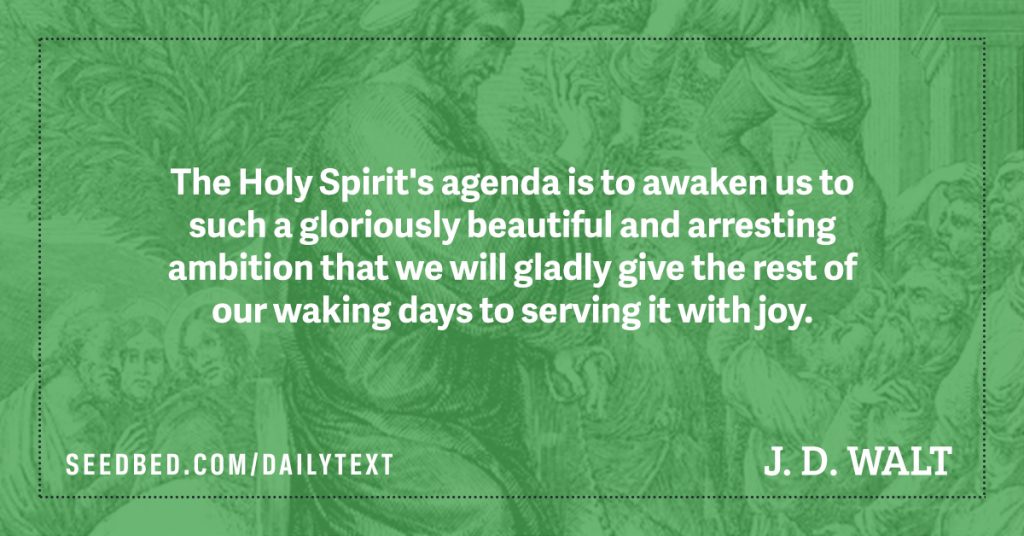 1. Are there points of confusion and question you have about today’s reading?

2. Perhaps the great issue I did not mention is Peter’s walking on the water. What does this tell us about the possibility of human beings stepping through the veil of the Kingdom of Heaven?

3. How has science, for all its gifts to us, influenced your view of Scripture? Do you see how we can affirm science without making Scripture somehow subject to science?