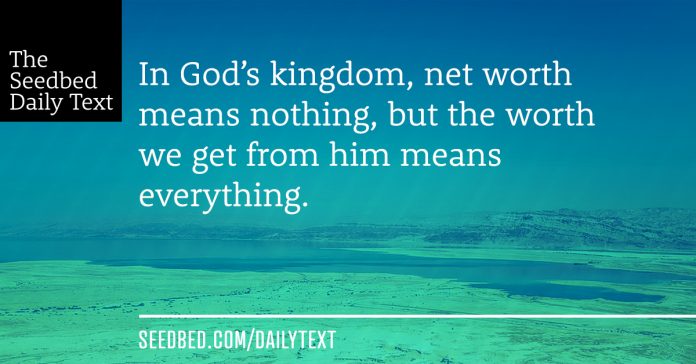 His neighbors and those who had formerly seen him begging asked, “Isn’t this the same man who used to sit and beg?” Some claimed that he was.

But he himself insisted, “I am the man.”

“How then were your eyes opened?” they asked.

He replied, “The man they call Jesus made some mud and put it on my eyes. He told me to go to Siloam and wash. So I went and washed, and then I could see.”

“Where is this man?” they asked him.

They brought to the Pharisees the man who had been blind. Now the day on which Jesus had made the mud and opened the man’s eyes was a Sabbath. Therefore the Pharisees also asked him how he had received his sight. “He put mud on my eyes,” the man replied, “and I washed, and now I see.”

Would the true blind man please come forward? Are you catching the splendid irony unfolding in this story?

His neighbors and those who had formerly seen him begging asked, “Isn’t this the same man who used to sit and beg?” Some claimed that he was.

There is the blindness of the man born blind, but there is a greater blindness afoot. It’s the blindness of the people to the man born blind. Here were “his neighbors and those who had formerly seen him begging,” and they were in a debate as to whether he was the blind man. He had become like furniture to his own neighbors. No one seemed to know his name. He was like that guy I see standing on the side of the freeway off ramp with a sign in his hand that says “I need food.” I am effectively blind when it comes to seeing him.

Several years ago I was invited to preach at a church on St. Thomas Island. Like so many other places, the contrast between the rich and the poor was staggering and yet they lived in such close proximity to each other. They had asked me to preach on this very text, John 9. I made a comment about this egregious disparity between the rich and the poor and how the longer we see it the more blind to them we become. At that point a woman abruptly stood up in the congregation about seven rows from the front. She began shouting at me, “I reject what you are saying. You are wrong! There are no poor people on this island! This is a lie you are speaking about us!” I had never encountered anything like this before or since. I didn’t know what to do. The woman went on shouting and the pastor called her to cease. She sat down reluctantly and I did my best to finish the message. As I stood in stunned silence, it hit me that the text I was preaching was actually unfolding before our very eyes. Her blindness to the unseen poor all around us was now on full display. It unfolded into a powerful revelatory moment of grace and truth.

Like a kid running out of class at the instant of the bell, I ran out of the church as the service ended. I have never been so glad to get out of a church before in my life. I’m told something of an awakening happened in the church in the wake of this shocking Sunday.

Honestly, in the many times I read John 9 prior to that occasion, I had never even seen this ironic blindness of everyone around to the man born blind. In fact, I had been blind to him too. More on this tomorrow.

Abba Father, we thank you for your Son, Jesus, who sees us all and who sees us as having the very same worth. Thank you that net worth means nothing in the kingdom of God and that your worth means everything. Open our eyes to see one another in the way you see us. We pray in Jesus’ name, amen.

1. Have you ever noticed this feature in the text–of the blindness of the people to the blind man?

2. Do you still see the poor in your midst or has your life become so insulated from their presence that you don’t have occasion to even look?

3. Have you ever wondered why we aren’t told the blind man’s name?