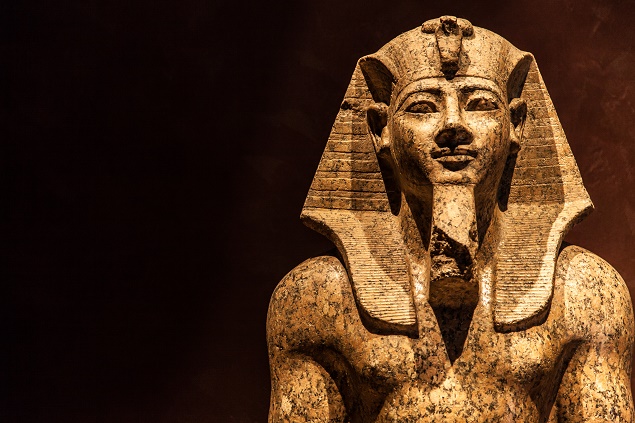 One of my mother’s favorite movies was The Ten Commandments, a 1956 C.B. DeMille American classic.   As a child, the overpowering presence of Moses as played by Charlton Heston was etched in my mind.

Equal on the screen was Yul Brynner portraying Ramses II, Egypt’s Pharaoh.   His name is rarely mentioned in the movie but rather he is referred to as Pharaoh, his job title as the political and religious leader of Egypt.

In the movie, Moses demands that Pharaoh let the Israelites go.  Pharaoh’s calm response is, “The slaves are mine, their lives are mine and all they own is mine.”

While the cultural setting and historical significance is far from Western culture, I wonder if Pharaoh’s philosophy regarding people can subtly be seen in leadership today.  He doesn’t respect the slaves as people; rather, he sees them as an object to fulfill an end goal. It goes without saying that he doesn’t compensate them fairly.

Just last week, a great teacher I know left a Christian school to go work elsewhere.  A former colleague from that school told me they are not treated well, not compensated adequately and overworked—all in the name of ministry and good works.  Pastors and church workers frequently leave their jobs at churches for many of the same reasons.

Generally, people in the marketplace do not leave their employer for only reasons of compensation.  That may be the answer they give as to why they left, but organizational culture and how they are treated and respected greatly affect their decision as well.

Pharaoh did not let the slaves rest and worked them into exhaustion. He would never have considered giving the slaves a day of rest.  When God commanded a Sabbath rest he was offering them a gift as their loving father.  Since God designed our bodies as temples of the Holy Spirit (1 Cor 6:19), we need to care for both our minds and our bodies.

Today’s technology can make setting boundaries challenging.  With instant communication there may be an expectation of instant availability and work after hours.  For those with responsibility in the home, it is part of their good works and service to Christ to be a good spouse and parent.  They need to be present and involved in their families.  Ironically, overworking an employee to increase productivity can actually cost an organization not only by turnover but increased health costs due to stress and children getting into trouble.

Pharaoh treated the slaves as objects or as a means to fulfill an end purpose.  Organizations today can overwork people, downsize too much, and expect people to do what they are told rather than to be creative and innovative in their work.  No matter the organization’s mission or the economic and market pressures, God has placed every individual in that organization to make a real contribution.  After all, we are also made in God’s image, which makes us creative beings.

Pharaoh did not adequately compensate the slaves.  Clearly today some jobs and industries pay more than others and that is a choice when choosing a field of work. However, people should be able to at least keep up with the cost of living.  But people want more than money. People want to be a part of the team, to be recognized for their contributions, to make a difference, to be respected and given opportunity to lead and innovate.

Leadership is a gift and responsibility.  Masters, provide your slaves with what is right and fair, because you know that you also have a Master in heaven (Colossians 4:1 NIV).

So what should you do if you find yourself working for a modern day Pharaoh?

If it is possible, as far as it depends on you, live at peace with everyone(Romans 12:18 NIV).

Whatever you do, work at it with all your heart, as working for the Lord, not for human masters (Colossians 3:23 NIV).

Blessed is the one who perseveres under trial because, having stood the test, that person will receive the crown of life that the Lord has promised to those who love him (James 1:12 NIV).

Let everyone be subject to the governing authorities, for there is no authority except that which God has established. The authorities that exist have been established by God (Romans 13:1 NIV).

…I urge that petitions, prayers, intercessions, and thanksgiving be offered on behalf of all men for kings and all those in authority, that we may live peaceful and quiet lives in all godliness and holiness. (I Timothy 2:1-2 NIV).

There is no perfect leader, no perfect organization, no perfect job, and no perfect employee.  But God is perfect and Jesus is working out his plans for you no matter how messy it might seem right now.

In the movie, The Ten Commandments, Pharaoh incorrectly believed that the people were his to command.  What Pharaoh painfully learned is that everything belongs to the Lord (Deut 10:14) and the people were only his to steward. Remembering that those we work with are opportunities for service will help us keep God’s perspective and maybe bring out the best in people.

Helen Mitchell is a regular contributor to Faith and Work Collective. Thanks, Helen!