Would the Real Satan Please Stand Up - Seedbed
close
Menu

38 Then some of the Pharisees and teachers of the law said to him, “Teacher, we want to see a sign from you.”

43 “When an impure spirit comes out of a person, it goes through arid places seeking rest and does not find it. 44 Then it says, ‘I will return to the house I left.’ When it arrives, it finds the house unoccupied, swept clean and put in order. 45 Then it goes and takes with it seven other spirits more wicked than itself, and they go in and live there. And the final condition of that person is worse than the first. That is how it will be with this wicked generation.”

This is bad. By now, Jesus has performed many signs. After alleging his work was empowered by Satan they now ask for another sign? “You’ve got to be kidding me,” Jesus must have been thinking.

The Pharisees, in their extreme quest for holiness (as they understood it), were now reading from the script of Satan. Remember that time back in the desert (see Matthew 4) when Satan asked Jesus for signs to provide proof of his identity (e.g., turning stones to bread, throwing himself from the top of the Temple)? Jesus rebuked Satan with a word from Deuteronomy 6:16: “Do not put the Lord your God to the test.” See how he responds to the Pharisees in today’s text in like fashion: “A wicked and adulterous generation asks for a sign!

Next he calls two witnesses to the stand–both outsiders in Israel’s eyes: The Ninevites and the Queen of Sheba. In both instances they repented in response to the proclamation of the Word of God. There were no  “signs” per se. We have no indication the people of Nineveh knew anything about the sign of the great fish. They responded with repentance to Jonah’s preaching of the Word of God. Jesus now takes the sign of Jonah and the whale and parlays it into the ultimate sign of his death and resurrection in which they would again cast themselves in the role of Satan.

Now to the final blow. Jesus, who has been going about delivering people left and right from the death grip of Satan, effectively likens the Pharisees oppressive hold on the people as like that of Satan. Jesus is sweeping the house clean but they are encouraging and even preventing people from opening their lives to the presence of the one true and living God. In other words, the fruit of the Pharisees’ leadership will be to make the condition of Israel something like seven times worse than it was before.

Oh, the irony of it all. The ones who accuse Jesus of following Satan turn out to be Satan’s unwitting minions and they have absolutely no idea of it. This very thing has happened in every generation since right up to the present day. We must beware of the cunning control movements (i.e. religious fundamentalism) of our time—especially the ones parading as the Gospel of Jesus Christ. They are the most dangerous people on the planet. It is so often the zealous adherents of a counterfeit holiness who turn out to be the unwitting agents of God’s crucifixion. 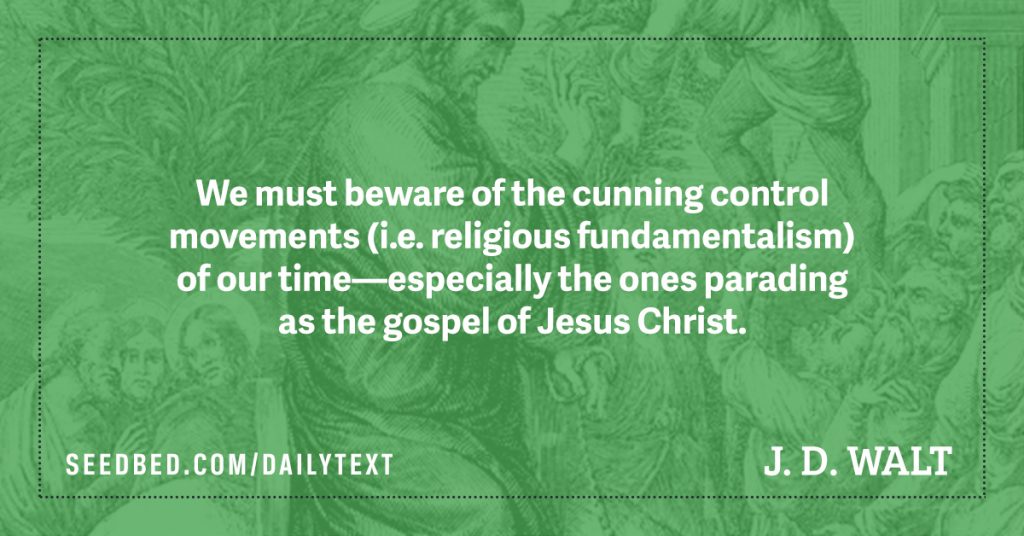 1. What are your thoughts on this last sentence: “It is so often the zealous adherents of a counterfeit holiness who turn out to be the unwitting agents of God’s crucifixion.” How do you see this happen still today?

2. Where do you see the unlikely repenting and the people you might expect to get on board staying away?

3. Why do we want a “sign” from Jesus? Are you putting God to the test in some area of your life?

© Seedbed 2021
Would the Real Satan Please Stand Up
MORE STORIES