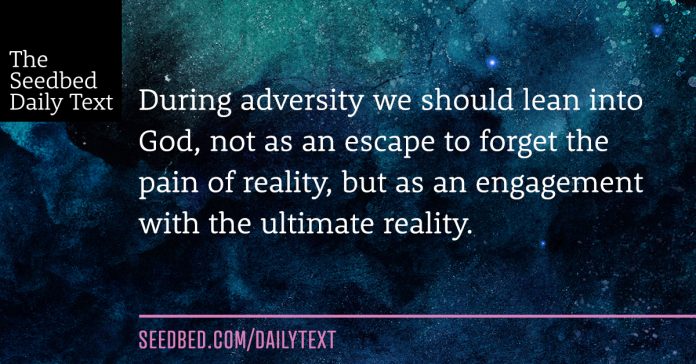 5 In the time of Herod king of Judea there was a priest named Zechariah, who belonged to the priestly division of Abijah; his wife Elizabeth was also a descendant of Aaron. 6 Both of them were righteous in the sight of God, observing all the Lord’s commands and decrees blamelessly. 7 But they were childless because Elizabeth was not able to conceive, and they were both very old.

8 Once when Zechariah’s division was on duty and he was serving as priest before God, 9 he was chosen by lot, according to the custom of the priesthood, to go into the temple of the Lord and burn incense. 10 And when the time for the burning of incense came, all the assembled worshipers were praying outside.

11 Then an angel of the Lord appeared to him, standing at the right side of the altar of incense. 12 When Zechariah saw him, he was startled and was gripped with fear. 13 But the angel said to him: “Do not be afraid, Zechariah; your prayer has been heard. Your wife Elizabeth will bear you a son, and you are to call him John. 14 He will be a joy and delight to you, and many will rejoice because of his birth, 15 for he will be great in the sight of the Lord. He is never to take wine or other fermented drink, and he will be filled with the Holy Spirit even before he is born. 16 He will bring back many of the people of Israel to the Lord their God. 17 And he will go on before the Lord, in the spirit and power of Elijah, to turn the hearts of the parents to their children and the disobedient to the wisdom of the righteous—to make ready a people prepared for the Lord.”

Luke begins this narrative by establishing the setting within its historical context. He tells us that these events take place “In the time Herod king of Judea.” But before we even finish the paragraph we learn that this opening sentence has been made obsolete. For all of Herod’s political maneuvering, collecting of power, building monuments to himself, solidifying his place among the great leaders of history, this will no longer be known as the time of Herod. We are nearing the arrival of King Jesus and from this point on, time itself will be marked by his birth. Herod is about to be overshadowed by the Light Himself.

As Luke introduces the story of Zechariah and Elizabeth, we find a microcosm of the larger story of Israel, and truly, all of Creation. Theirs is a story marked by waiting and hoping. For years they longed to have children, but had come to terms with the harsh reality that their eyes would never see the fulfillment of this hope and their hearts would never experience the joy of this longing. Exiled in the desert of waiting, they thought they would never see the promise. Their hopes waned in the stifling silence of God.

Perhaps you’ve been there? You’ve known what the desert feels like. How do you respond to God when it feels like He is not responding to you?

Despite his disappointment, we find Zechariah in worship. He hasn’t let his heartbreak become bitterness against God. Instead, he is leaning into Him. Not as an escape to forget the pain of reality. But as an engagement with the ultimate reality. Worship is reality, a declaration of the most real reality that Yahweh is God and I am His.

In this moment, an angel appears to him with this proclamation, “Do not be afraid, Zechariah; your prayer has been heard.” This is the great promise of Advent. Do not be afraid! Your prayer has been heard! We were in desperate need for a Savior. And God heard our prayer. And we marvel at the kindness of God. As He moves to answer the deepest longing of Creation on a cosmic scale, He begins by fulfilling the hope of one couple, convinced they had been forgotten. A hidden beauty is that Zechariah’s name means “Yahweh remembers.” For his entire life, every time he heard someone call his name, every time he introduced himself, seeds of promise were being planted in his soul. And those seeds burst into harvest when he heard his from the mouth of Gabriel. “Do not be afraid, Zechariah. Your prayer has been heard. You have not been forgotten. Yahweh remembers.”

Zechariah and Elizabeth will become parents of John the Baptist, the trailblazer for Jesus the Messiah. And the redemption of their pain is the beginning of our healing.