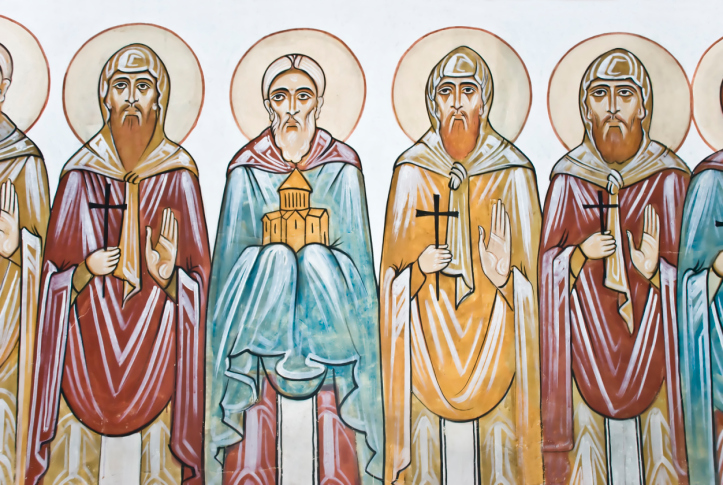 All Saints Day is usually celebrated on the first of November by parts of Western Christianity. Observed since the medieval times, it is a time to honor, learn from, and worship with the community of saints that have both gone before us and those who are contemporaneous with us. All Saints Day reminds us of the courageous faith of the ancient church. It should turn our eyes to the vibrant, global church today. It should draw us to honor and bless those saints who’ve played a formational role in our own stories—think of the mothers, mentors, chaplains, teachers, spouses, in whose absence we would be without the holy prayers interceding on our behalf. Finally, and not the least, it should remind us that the primary way the New Testament understands Christians is as saints, not sinners.

So here are 5 less known saints from church history whose lives speak to us in a way similar to Paul’s voice in 1 Cor. 11:1, “Imitate me as I imitate Christ.”

Thomas was a Persian Christian merchant who may have settled in India as early as the 4th century. Possibly fleeing Persian persecution, tradition has it that Thomas was wealthy enough to purchase land and build a church for the Christian community that migrated with him. This is one of our earliest reports of a sustained Christian community in India. Thomas of Cana provides us with an example of someone who brought his faith with him through migration. He also used his own blessings and influence to bless the people of God. Thomas of Cana helps break down the divide between sacred and secular vocations.

“So whether you eat or drink or whatever you do, do it all for the glory of God.” 1 Corinthians 10:31

Simply known as St. Monica to some, she had her marriage arranged for her. Her husband was a nonChristian official in North Africa. He was much older than her and often violent. Her story is exceptional because she chose to remain with her adulterous husband and suffer living with her mother in law, who was also difficult. She remained especially generous with her family, including persisting in prayer for one of her sons who she recognized as exceptionally gifted. After many years, her husband and mother in law finally converted to faith. Decades later, so did her son. His name was Augustine of Hippo. Monica had every right to part ways with such an abusive partner. Her persistence in prayer, however, definitely earned her status of patron saint of wives and abuse victims.

“Sing for joy, O heavens, and exult, O earth; break forth, O mountains, into singing! For the LORD has comforted his people and will have compassion on his afflicted.” Isaiah 49:13

Martin Bucer is one of the lesser known reformers from Switzerland. He serves as a model for us because of his catholicity—if this can be said of a reformer. He is often referred to as the “Peacemaker of the Reformation.” He became Lutheran after leaving the Dominican order, and led part of the Reformation in Strasbourg, where he often worked at reconciling Lutherans, Reformed, and Catholics to one another. He also taught at Cambridge by invitation of Thomas Cranmer. Bucer reminds us that it’s possible to be ecumenical and at times even be winsome. In his life we are especially reminded of Jesus’ words, blessed are the peacemakers.

“Blessed are the peacemakers, for they will be called children of God.” Matthew 5:9

Born in France, Rose grew up to join the Society of the Sacred Heart. Her life is to celebrated especially because many of God’s accomplishments through her occurred during the second half of her lifetime. Rose left for the United States at age 49, where she founded a boarding school and opened the first free school west of the Missouri. Much of her work was done in frontier conditions. At the age of seventy-one, she began a school for Native Americans. Her love for Native Americans and her commitment to the midwest region has earned her repute as having an exceptional servant heart. Rose reminds us what it looks like to be committed to the holistic prosperity of a community.

“So, being affectionately desirous of you, we were ready to share with you not only the gospel of God but also our own selves, because you had become very dear to us.” 1 Thess 2:8

Singh was an Indian missionary who converted to Christian faith from the Sikh religion. He experienced unique visionary and miraculous experiences that helped him along his way in his faith. He had traveled widely in his missions, including all over Asia and even to Western Europe. By rejecting earthly possessions, being dressed in his characteristic yellow robe, and making sure that the Christian faith assumed a distinctly Indian character in his missionary work, Singh stands out as a missionary from the majority world who ministered in a way wholly appropriate for reaching his own people. Singh reminds us that God’s family is diverse and prospering well beyond the reach of the western Church.

“Jesus said, ‘Truly, I say to you, there is no one who has left house or brothers or sisters or mother or father or children or lands, for my sake and for the gospel, who will not receive a hundredfold now in this time, houses and brothers and sisters and mothers and children and lands, with persecutions, and in the age to come eternal life.'” Mark 10:29-30