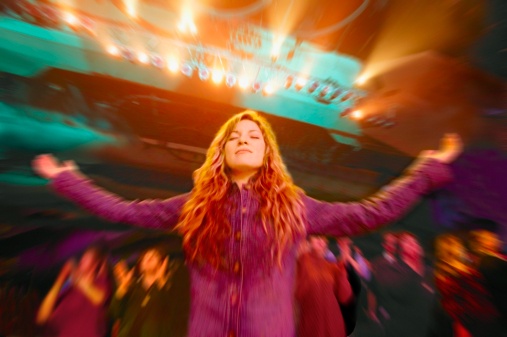 For the past five years I’ve often been asked to lecture on the “History of ‘Contemporary Worship.’” As oxymoronic as that sounds, I have college freshmen in my worship course who know nothing of the “worship wars” from the 1990’s, much less of the Jesus Movement of the late 1960’s and early 1970’s. The fact that there have been so many contemporary worship changes over the past twenty years is lost on many. Here are six things that have changed since I began leading contemporary worship in the 1990’s.

During the summer of 1998 I traveled throughout the Southeast with a group of fellow college students leading worship in dozens of churches. I could safely assume that most contemporary-styled congregations would share a common repertoire. Not so anymore. An explosion in the popularity of contemporary worship songs, more numerous publishing companies, and a growing emphasis on songwriting, have all contributed to a burgeoning corpus of contemporary worship songs.

Lester Ruth once suggested that churches might someday end up with “traditional contemporary” worship services. This, in fact, is what has happened over the last decade. Because contemporary worship was birthed out of a youth movement that emphasized musical forms reflective of culture, they easily became dated. What was “contemporary” for a teenager in 1970 was no longer “contemporary” for a teenager in 2000. Around this time many high school and college students began using the term “modern worship” to differentiate a new sound of congregational song that was being crafted for their generation. This has led (along with other factors) to a fragmenting of contemporary worship—often along generational lines. Where once churches differentiated between “traditional” and “contemporary” services, now many offer “traditional,” “contemporary,” “emergent,” and (I’ve seen a lot of these lately) services geared toward high-school students with names like “Collide” and “Infuse.” The point should be clear: “contemporary worship” is not (and maybe never was) a monolithic entity.

Many of the artists who craft contemporary worship songs have responded to the call for a greater depth in lyrics. There is clearly greater lyrical sophistication in many of the songs that are being written today. One doesn’t have to look far to find songs that allow for the expression of lament, reference all three Persons of the Trinity, use a corporate perspective (“we”), and explore some of the deeper mysteries of what God has done for us in Christ—these are just a few examples. Simply put, “Lord, I Lift Your Name on High”—which was, for years, the punching bag for those miffed with contemporary worship music—is no longer an accurate exemplar of what current worship songs look like.

5. Returning to the Past

Similarly, contemporary worship is no longer dominated by a suspicion of tradition. The explosion of modern arrangements of hymns, for example, is a relatively new phenomenon within contemporary worship. The Jesus Movement adopted the suspicion toward authority that was a defining trait of the Hippie Movement. This often meant that many of the worship practices of the historic church were rejected (including hymnody) in favor of new practices. Since the late 1990’s contemporary worship has seen a remarkable turnaround in this aspect. Now many congregations are expressing a desire to be rooted in liturgical forms beyond their own moment. The singing of hymns, the celebration of weekly Eucharist, and even the observance of Lent, can often be found in contemporary-styled congregations.

Dust off that old Maranatha! CD from 1992 and give it a listen. Now put in The David Crowder Band’s “Give Us Rest (or a requiem mass in C)” and note the clear difference in the way the two albums sound. The “happy clappy” praise song is no longer the standard in contemporary worship music. Some of the change is certainly due to the ever-present influence of the broader culture—just consider how many worship teams are now anchored by the pounding kick-drum since Mumford and Sons’ debut cd. Much of the growing musical sophistication within contemporary worship came about as artists took seriously the charge that contemporary worship suffered from a lack of creativity and excellence. The change comes at a price, though. As congregational worship songs become increasingly more complex their accessibility decreases. The tension between excellence and congregational accessibility has always been an issue within the music of the Church.