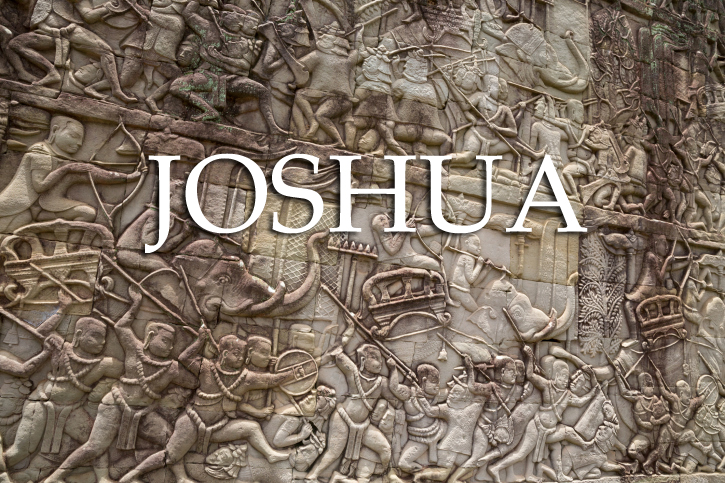 The problem of violence in the Old Testament doesn’t involve what we’d call mere criminality. The real problem is divinely sanctioned, divinely commanded violence, and particularly, the commands to annihilate the inhabitants of Canaan. These sound to our modern ears like ethnic cleansing, genocide.

Before moving forward, we need to get clear about our questions. It is certainly worth asking, why did God allow, but sanction, command, and participate in warfare? Important as that question is, it is likely not one we can answer definitively. There is, however, another question, a more urgent one for every Bible reader, teacher or preacher. What do the OT writers themselves try to teach the reader with this material? Do the books of Joshua and Judges, with their presentation of warfare and violence, provide a warrant, a summons, for modern readers to take up arms against, to join an implacable conflict with a human enemy?

The Old Testament presents two basic kinds of warfare. The first appears in Joshua, and we’ll call it “Holy War.” “Holy War” is war in which God himself is the main combatant, though Israel participates too. Central in Holy War is the Hebrew term kherem, the idea that the enemy and all their possessions are devoted to Yahweh. On the surface, this looks like a command for total destruction. This type of warfare is characteristic of the book of Joshua, The other type, found in Judges, we’ll leave for another time.

It is war that Yahweh directly commands by means of a special revelation to his chosen leader. This didn’t involve simply pondering various principles and policies and deciding that war was the best plan. This was Moses and Joshua. Both are pictured as Prophets, meaning they received direct messages from Yahweh about his will, right then and there, a life and death decision. So if a reader wanted to use the warfare in Joshua to justify human warfare, they’d need to assert that their war plan was not merely justifiable. They’d have to claim their plans were revealed directly by God.

2. Fact Two: Holy War, in the book of Joshua, is miraculous.

God not only declares war, he is also the primary fighter. Yahweh the Divine Warrior fights, miraculously brings victory, and the Israelites march around, toot trumpets, shout and mainly just watch in awe and then follow up with whatever action Yahweh commands. So if a modern reader wanted to justify violence from Joshua, they’d have to set aside strategies, weapons and training and expect miraculous victories! It begins to look like the author of Joshua doesn’t give us a very good plan for modern warfare.

3. Fact Three: Israel often has mercy on her “enemies.”

This is a surprise. The Book of Joshua reports cases of mercy against Israel’s “enemies”. Here are 3 quick examples. First, Rahab the Harlot in Joshua 2 is Israel’s first contact with “the enemy.” A prostitute would likely also be a priestess in a pagan shrine. Yet the Israelites show mercy to Rahab. Why? Her confession of faith in Israel’s God meant she was no longer the enemy. Israel spares her and everyone in her “house”–one wonders about the occupants of her house! Rahab is incorporated into Israel and ultimately ends up the genealogy of Jesus the Jewish Messiah in Matthew 1!

Second, look at the Gibeonites in Joshua 9-10. In fear they trick Joshua into a making a covenant, which Joshua and God both honor. While it was a hasty act, Israel is not punished but experiences the greatest miracle in the book of Joshua, when the sun and moon halt in the sky as Israel, keeping their word, races to the defense of their new, unlikely partners.

Third, in the great reading of the law in Joshua 8, the author speaks of “all Israel” as composed of “native born” and “foreigners.” The command to eliminate the Canaanites seems to have had an exception clause: Israel won’t kill those who take shelter under Yahweh’s wings.

After the battles of Jericho and Ai the book of Joshua portrays Israel’s wars in Canaan as responses to aggression by Canaanite kings. In chapter 5-11, we read that when the Canaanites heard what God had done, they massed together, combined their armies, and prepared to annihilate the Hebrews. The book presents these conspiracies not just as military resistance against Israel, but as a rejection of Yahweh’s presence in Canaan, in contrast with Rahab’s confession of faith. So again, these stories don’t make very good fodder for defending our own practice of warfare, but already seem to be serving as images of how the nations reject God and fall to his judgment.

5. Fact Five: The holy war is not against Canaan as a whole.

Holy War in the book of Joshua is not really a war against Canaan and Canaanites. Except for very general statements, we never read a specific narrative describing an Israelite assault on peasants or on farming villages. The entire central part of the land, Ephraim and Manasseh, the heartland of early Israelite settlement provides not a single battle story. Israel moves in apparently without a fight.

All the battle narratives name city kings as the enemy. These kings were all appointed by Egypt to suck every morsel of economic and military benefit out of Canaan for the greater glory of Pharaoh. Joshua’s mission seems to have been to destroy the network of city rulers who controlled Canaan, breaking Egypt’s exploitation of Canaan and defying Pharaoh’s claims to be God. The battle narrative climaxes in Joshua 12 with a list, not of annihilated population groups or destroyed cities, but of slain kings, dead tyrants.

So what do we make of the language of extermination, killing “everyone who breathes?”

Scholars of ancient military texts remind us that in the ancient Near East, battle accounts used very stereotyped, extreme language. Nuance was not their strong suit! A king would claim he killed every single occupant of a land, only to report how much tribute the presumably dead enemies had to pay each year! Clearly, the claim of annihilation there only meant to convey total victory.

We should also remember that our modern notions of genocide and total war come from our knowledge of weapons of mass destruction and the actual experience of genocide by these means. The ancient world, for all its ferocity, couldn’t do better than spears, arrows, swords and catapults. They had no way to envision the literal extermination of whole populations. The language was stock military rhetoric that conveyed an unquestioned, uncontested victory. Maybe that could help us with those statements in Joshua too.

7. Fact Seven: Stories of miraculous victories are combined with calls to covenant faithfulness.

The book of Joshua combines the stories of miraculous victory in battle with appeals to be faithful to the law of God as it is found written in the book of Deuteronomy. The reader is not called to emulate the militarism of the book, but to draw from the battle stories the courage and determination to be obedient to God’s will, as found in Deuteronomy. That has two consequences. First, Deuteronomy thinks of the law as a written text, a scripture. The written will and revelation of Yahweh is ultimately the the sacred space, the “promised land,” that the reader is called to occupy. Second, the core requirement of Deuteronomy is to love Yahweh with all the heart. This involves remembering him, commemorating his mighty deeds, celebrating his festivals, living kindly on his land, caring for the sojourner, and protecting the dispossessed and the helpless. So the reader is given war stories, but these stories explicitly illustrate a scripturally defined spirituality of love for God and compassionate regard for others and the creation. So it’s ironic that a book devoted to the subject matter of “Holy War” is actually aimed at engendering Holy Love.

I have one concluding thought. There is still something disquieting, something disturbing, about this theme of kherem, of total destruction of all that defies God’s presence and rule.  This theme still rests uneasily with our inclusivist sensibilities. It reminds us that this promise of God and the call to faithful obedience is not merely an invitation: it is a life or death command. Here, in Joshua,  in real space and time, each and every person’s future was permanently determined by their solidarity with Yahweh of Hosts. A line was drawn in the sand: who will serve Yahweh?

The fact is, that a day is coming when Joshua-Jesus will appear in clouds of glory, seated upon a white horse, with a two-edged sword, to pass judgment upon all that violates and destroys God’s creation. A time will come when not just the temporal, earthly happiness, but indeed, the eternal destiny of every single person will be decided by only one criterion: solidarity with the one God, the Lord of Hosts, who reveals himself through his Son Jesus-Joshua the Christ-King.

Have we become so comfortable with a situation in which we can enjoy the blessings of God, while not feeling a need to enjoy God himself? Consequently, are we now decidedly uncomfortable when God brings that state of affairs to an abrupt end? Rahab got it right: Yahweh is the God of the heavens and the earth, and the kings of Canaan have every reason to fear. Likewise, when we ponder the righteous judgment that God will execute when Jesus-Joshua slips his pierced foot into the stirrup and swings up into the saddle of that white war-horse, maybe we too should tremble.